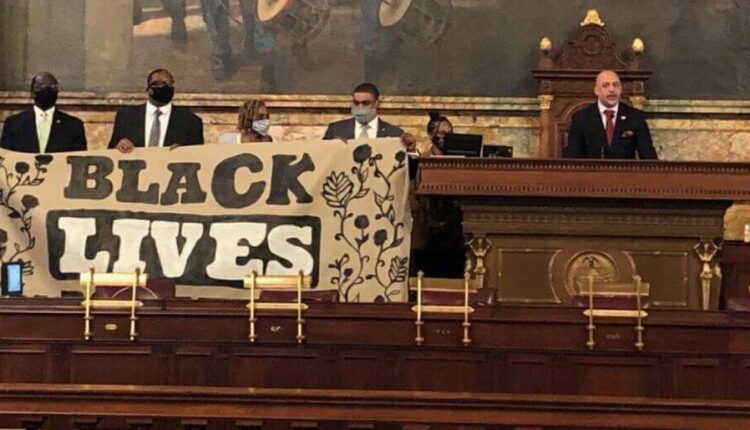 For Lorraine Jones, the first nationwide observance of Juneteenth as a federal holiday last week, was a triumph of history. But now the civil rights leader says she wants state lawmakers in Harrisburg to turn that triumph into action.

“It is critical now more than ever that we focus on protecting those that are most vulnerable. In the wake of Juneteenth and other historical moments that have transpired, it is time for our country to face our ugly past, be held accountable and correct the wrongs,” Jones, the president of the State College NAACP, told the Capital-Star. “Discrimination has an impact on several generations and needs immediate attention. We need to try to heal. Supporting and passing anti-racist and anti-discrimination legislation is a great place to start,”

Bills now before the General Assembly aim to do just that. But whether they’ll eventually find their way to Gov. Tom Wolf’s desk is another matter entirely. For her part, Jones supports the push for new legislation.

Juneteenth is known as the day that every slave was officially free in the United States on June 19, 1865. Two years after the Emancipation Proclamation was signed, slaves in Galveston, Texas, were finally freed.

In the state House, Minority Leader Joanna McClinton, D-Philadelphia, is sponsoring legislation that would combat the criminalization of Black hairstyles and protect the expression and culture of the Black community. She introduced the legislation, known as the CROWN Act in April. The acronym stands for “Creating a Respectful and Open World for Natural Hair.”

The effort started in California in 2019, and would ban discrimination based on an individual’s hairstyle associated with their race. In the legislation, the term “race” includes hair texture and protective styles such as braids, bantu knots, twists, locks, and extensions.

“I recognize that people are conscientious about this issue and we are able to help by making sure that folks can’t be discriminated against for that reason, and that if they are, are able to file a lawsuit in the Commonwealth of Pennsylvania,“ McClinton told the Capital-Star.

McClinton isn’t the only one whose bill has not yet been brought up for conversation and is stuck in committee.

In the state Senate, legislation sponsored by Sen. Sharif Street, D-Philadelphia that would ban police chokeholds, create a “use of force” policy, and require all Pennsylvania law enforcement agencies to provide training on the policy they create, still is awaiting action.

“It creates some uniformity in how we create standards for use of force. It sends a strong message that chokeholds aren’t acceptable and there needs to be accountability for what kind of force officers use,” Street told the Capital-Star.

This legislation was created after a police officer murdered George Floyd in Minneapolis, Minn. His death, which was caught on video, sparked another wave of Black Lives Matter protests across the country.

Among those protests was a 45-minute takeover of the Pennsylvania House floor by Black legislators, demanding that the General Assembly take action on their bills to address racism and police violence that had been bottled up in committee.

But Street’s chokehold bill, despite passing the Senate unanimously in June 2020, did not make it to Gov. Tom Wolf’s desk. Instead, House Judiciary Committee Chairman Rob Kauffman, R-Franklin, never called it up for a vote.

A second iteration is sitting in the Senate Judiciary Committee. The committee’s chairperson, Sen. Lisa Baker, R-Luzerne, said “there is a lot of time remaining in the two-year legislative session, and this is one of many proposals under review by the committee.”

Rep. Brian Sims, D-Philadelphia, has introduced a resolution that would make discrimination against marginalized groups a public health issue, endangering the safety of Pennsylvanians by affecting their physical and mental health.

Some examples of situations that classify as harmful discrimination are: lack of access to educational and financial resources, exposure to environmental hazards, employment discrimination, and traumatic personal experiences.

“It is important that we don’t just stop on Juneteenth. It’s important that we look at all of the systemic issues and racism in legislation and policy and how that has impacted our community,” said Rep. Donna Bullock, D-Philadelphia, the chairperson of the Pennsylvania Legislative Black Caucus.

“Yes we celebrate that freedom, those accomplishments, Black culture, Black excellence and all of those things; but we also continue to work on the legislation and policy that can make a significant difference in the lives of Black and brown Pennsylvanians,” Bullock said.

Shaniece Holmes-Brown is a summer intern for the Pennsylvania Legislative Correspondents Association.

The University of All of Them: PASSHE merger mania is on the fast track | Fletcher McClellan