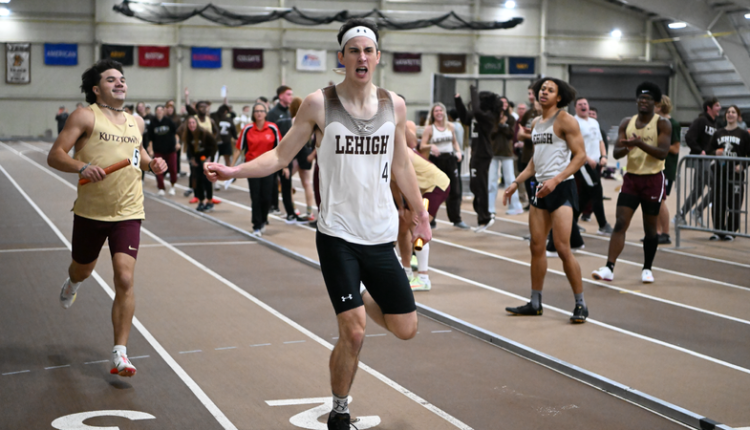 BETHLEHEM, Pa. – The Lehigh men’s track and field team exceeded its own expectations on Friday and Saturday, winning nine events during the Fast Times Before Finals meet at Rauch Fieldhouse.

“Overall, what I saw from the team was a bunch of guys fighting for each other,” said head coach Todd Etters. “I think they showed a level of confidence to go out and try to win and for the most part that’s what they did and that’s what I was hoping to see. I was hoping to see guys who were willing to compete for each other, push hard and step up into roles that they maybe weren’t used to from previous years.”

“We had some guys in the pole vault that were green or had not jumped in a long time so it was great to see, you could tell the second they got over the first bar it was a different attitude,” Etters said. “They were a little bit more relaxed. We have a new coach there, Coach Bennett and he’s doing a great job with them.”

Lovering won the Mountain Hawks’ second throwing event of the weekend on Sunday morning, finishing first in the shot put with a mark of 15.53m. Fellow sophomore Alex Clevenger finished second overall with a mark of 14.72m while first-year Joe Nowakowski (13.68m) finished fifth in his collegiate debut.

“Our throws are going to be an impressive group for us all year,” said Etters. “Three of the guys in the weight throw threw marks that would have scored in the league last year. There’s no doubt that Coach Allison Taub has got that group primed and ready to go. They’ve matured and set their sites on some of the highest levels that there are and I think that’s what it takes, you have to know what your target is and they certainly do.”

Senior Brandtson Duffie opened up the season with a convincing win in the 800m on Saturday afternoon. Duffie won the race with a time of 1:56.09. Lehigh had five more runners finish in the top ten following Duffie.

The Mountain Hawks wrapped up the two-day meet with two impressive relay wins on Saturday evening. Senior Jacob Martinez, sophomore Ethan Hood and first-years Henry Burd and Max Leffler were members of the first-place 4×800 relay. The Lehigh relay team finished the race with a convincing time of 8:03.24.

Lehigh wrapped up the day with an exciting win in the 4×400 relay. Patrez Thomas started the relay strong before passing the baton off to Amondo Lemmon. Lemmon continued to maintain Lehigh’s lead before senior Drew Roman took over for the Mountain Hawks. Roman extended Lehigh’s lead before passing the baton to Douglas Cooke, the final member of the relay.

Kutztown’s relay team began to close in before Cooke sprinted the last 100m to claim Lehigh’s ninth win of the day. The Mountain Hawks finished the race with a time of 3:27.98.

“I think Cooke has come a long way in his career and now he is a rock and dependable,” Etters said. “He did exactly what we saw him doing in practice all along so that was nice to see. Even the way he closed out the 4×400, a pretty tightly contested race and I thought the four legs stayed composed and put up a winning performance and that’s what it’s all about.”

Lehigh will take a month-long break before returning to action on Jan. 14. The Mountain Hawks will host their annual Angry Birds Invitational at Rauch Fieldhouse following winter break. Both Monmouth and Sacred Heart are set to compete against Lehigh in January.