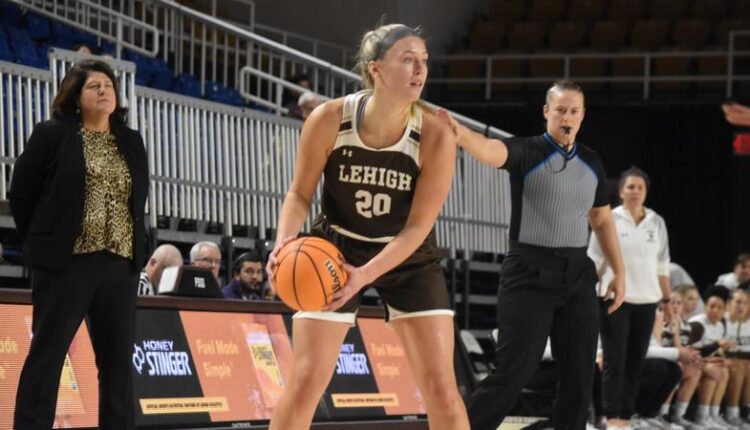 BETHLEHEM, Pa. – It was a heartbreaker in Bethlehem as the Lehigh women’s basketball team fell 67-64 to Quinnipiac Sunday afternoon in the consolation game of the Christmas City Classic, presented by SureStay PLUS Hotel by Best Western Lehigh Valley Hotel and Conference Center at Stabler Arena.

Frannie Hottinger knocked down two free throws with 33 seconds left to put Lehigh up two, but Rose Caverley converted a layup and made a free throw with 16 seconds left, which gave the Bobcats a 63-62 lead. Lehigh came down and had an opportunity to score but missed the bucket.

The Bobcats sent Jackie Grisdale to the line, who converted both free throws. Hottinger would go back to the free throw line where she made one and missed the second. Lehigh fouled again. Quinnipiac made a free throw and gave Lehigh the ball. The Mountain Hawks were down three and first-year Lily Fandre’s game-tying 3-point attempt went in and out.

The Mountain Hawks are now 2-5, while the Bobcats improved to 3-3. While Lehigh lost the two Christmas City Classic games, both games were very close and Micir said they learned a lot about themselves.

Fandre had another impressive outing coming away with 12 points and seven rebounds.

It was Quinnipiac who got out to a really hot start, shooting 81.8 percent from the field in the first quarter. The Bobcats continued to lead the way for the first half. Quinnipiac’s biggest lead of the day was in the second quarter when the Bobcats went up 12.

“The message at halftime was rebound, and when we get to rebound on the defensive end, we get to run, and we ask everybody all the time since they’re playing Kenz really tough, time for other people to step up,” Micir said. “She did a great job of making sure her other teammates got open, and that’s when runs happen when all five of us are working together.”

Lehigh got his first lead of the day off of two Kaylee Van Eps free throws with three seconds remaining in the third quarter.

“I loved their resilience,” said Micir. “I would have loved for a better start. I don’t think we contested well. Quinnipiac, give them credit. They made shots. We showed that we can fight back, and not just fight back, but start to build a lead. Now, it’s going to be keeping that lead that matters.”

Kaylee Van Eps led things for Lehigh tonight with 13 points and Hottinger and Fandre both had 12 points.

The Mountain Hawks will return to action on Wednesday vs. Rider at 5 pm in Lawrenceville, NJ

“Mindset going into Rider is that first, and foremost, we get a day off to rest and recover, and then we’ll erase what just happened now,” Micir said.” The mindset is it’s going to be another step in our journey together, and that’s what it has to be the entire way.”

Mackenzie Kramer was named to the All-Tournament team after averaging 16.5 points in these two games.