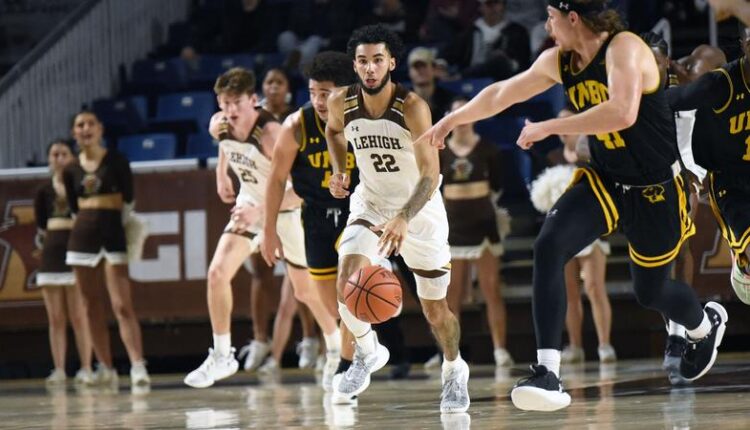 BETHLEHEM, Pa. – The Lehigh men’s basketball squad dropped its second straight contest and was handed their first home loss of the season in an 88-62 decision to UMBC in Stabler arena Saturday afternoon.

The Retrievers (5-4) earned their first win over Lehigh (4-4) since 1997 and broke a three-game win streak that the Mountain Hawks held. The overall series between the two squads is tied at 3-3.

“We dug ourselves into such a deep hole. I thought UMBC’s pace, tempo and skill level was high and we were just too reactionary,” commented head men’s basketball coach Dr. Brett Reed.

After an Evan Taylor three-pointer to give the Lehigh squad a 3-2 advantage, UMBC scored the next 16 points to push the retrievers to a 18-3 lead. The Mountain Hawks got the deficit to ten points, 21-11, then UMBC continue to add it on and pushed their advantage to 20 points on multiple occasions. The Retrievers ended the first half with a three-pointer at the buzzer to give them a 48-21 lead and held Lehigh to 25.9 percent (7-for-27) shooting from the field while UMBC shot 60 percent (18-for-30 ) from the floor.

STEAL AND FLUSH! Whitney-Sidney gets a breakaway dunk to give some life to Lehigh. UMBC leads the Mountain Hawks 39-19 with 3:24 remaining. #GoLehigh

UMBC scored the first six points of the second half before Taylor recorded five consecutive points to put the score at 54-26. The Retrievers reached their largest lead of the afternoon of 35 points, 67-32, with 12:06 remaining in the half. Lehigh got the deficit down to 23 points but UMBC would cruise to an 88-62 victory.

“Right now, UMBC is playing some excellent basketball and unfortunately our team didn’t muster what we needed to slow them down and get them under control,” added Reed.

Three Mountain Hawks finished in double-figures in points, led by sophomore Tyler Whitney-Sidney, who recorded a career-high of 23 points going 7-of-14 from the field, 3-for-4 beyond the three-point line and 6-for-7 at the foul line. Whitney-Sidney also led the team in steals with four, to go with one assist and four rebounds. This was his fourth straight game scoring in double digits and he is 22-for-23 from the free throw line in the last three contests.

Senior Jake Betlow and Taylor both contributed 15 points in the game. Betlow’s 15 points established a career-high as he drained five three-pointers for the Brown and White. He also added one steal and a rebound while Taylor registered a team-leading six boards with two assists to go with his 15 points. This is Taylor’s sixth game scoring in double-figures this season.

“Jake (Betlow) gave us some good minutes and knocked down some good shots and was a positive spark for us,” Reed noted.

The Mountain Hawks will have 11 days until they hit the hardwood for their next contest, when the squad travels to Wisconsin to take on the Badgers on Thursday, Dec. 15, inside the Kohl Center. Tip-off is set for 6 pm CST / 7 pm EST and will be broadcast on Big Ten Network and Fox Sports Radio 94.7 FM and 1230 AM.