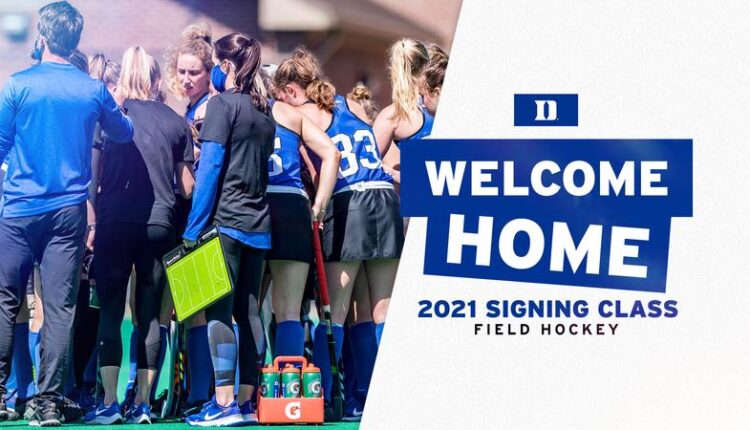 “Duke field hockey welcomes the incoming class of 2021,” Bustin said. “Collectively, this group boasts the incredible characteristics of a Duke student-athlete. Each are committed to learning, serving the University, field hockey program, community, and representing their families and teammates with respect and pride. Duke True cannot wait to welcome the graduating class of 2025 to campus!”

A four-year varsity letterwinner from Archbishop Spalding High School and club player for Freedom Hky, Bumgarner was ranked among MAX Field Hockey’s Top 50 for the Class of 2021. While her team went 5-0 during a small season this year, she was a first team all-state selection in 2019 and second team all-state honoree in 2018. Bumgarner is a two-time National Futures Championship selection. She traveled to the Croatia Cup in 2018 with the USA Indoor National Team and was on the USA Indoor National Development Team in 2019.

Clouser, a four-year letterwinner and two-year varsity captain from The Hill School, finished her high school career with 54 goals and 36 assists after her senior season was canceled due to COVID-19. She was named a top-50 player by Max Field Hockey. Playing with WC Eagles, Clouser was a member of the top outdoor team that were pool champions multiple times for NIT and NCC. She was on the USA National Indoor Junior Team in 2019-20.

Maransky lettered all four years at Mount Saint Joseph Academy and played club for WC Eagles, earning her way into Max Field Hockey’s Top 50. While playing with WC Eagles, she was a three-time National Club Champion and five-time NIT Champions. She’s a current member of the US Indoor National Team and was on the junior team in 2018-19, winning the Croatia Indoor Cup in 2019. Maransky was a two-time first team all-state and all-area selection during her junior and senior seasons.

Norair played varsity field hockey for four years at Fredericksburg Academy before her senior season was canceled due to COVID-19. During her career from eighth grade to junior year, Norair tallied 52 goals and 32 assists. She’s been a part of the Futures pipeline since 2014 and was chosen for the US Rise National Team in 2019. Following a strong junior campaign with 59 points (22g, 15a), Norair was named the Conference Player of the Year and a first team all -state selection. She plays for TCOYO Hockey Club and was ranked in the top 50 of the 2021 signing class. Her oldest sister, Meghan, played field hocky at Duke (2014-16) and sister, Colleen, played at Virginia (2016-19).

Palde checks in as Duke’s top recruit, ranking in the top 10 of the Class of 2021. Teammates with Clouser at The Hill School and on WC Eagles, Palde racked up 142 career points on 51 goals and 40 assists as 67 points (24g, 19a ) came during her junior campaign. She was an NFHCA All-America First Team and NFHCA All-Region First Team selection as a junior. Along with her fellow Blue Devil recruiting class, Palde has made numerous stints with the US Women’s Indoor National Team and was selected for the 2020 US Rise Women’s National Team.

A starting forward from eighth to 12th grade at Johnstown High School, Ringer has put together an impressive junior career with 110 goals and counting – spring senior season due to COVID-10. Ringer was named to the Max Field Hockey’s Next 50 – Top 100. She was her team’s leading scorer as a freshman, sophomore and junior, as Ringer broke the school record for the most goals scored in a single season with 44 as a junior. Ringer has been a National Futures Championship selection each year and plays for the ADK club team.

Over the coming weeks, GoDuke.com will break down the incoming freshman class individually.

Examining the spread of disease in marginaliz