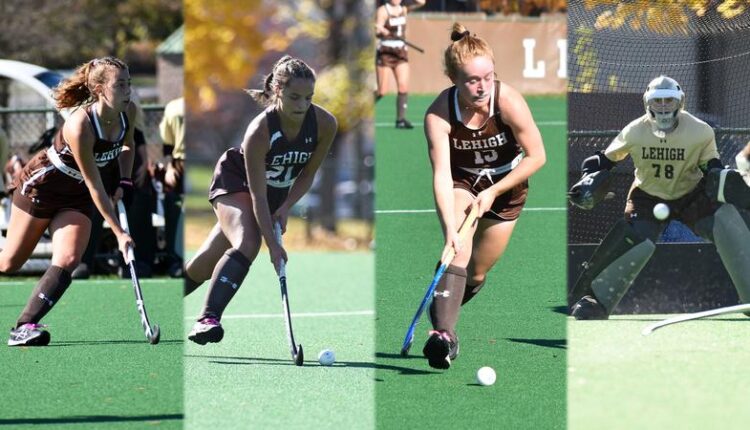 Lehigh matches the same number of all-league honorees from a season ago, and tied the most since the Patriot League expanded to seven teams in 2013.

Bonthuis and Gatelein both earn their first nods to the all-league first team, as Bonthuis was a second-team all-league honoree a season ago and Gatelein recognized as an all-league second team recipient during her first year in the spring 2021. Kahn earns her second All-League accolade, earning Goalkeeper of the Year and a spot on the first team in the Spring of 2021 while Mes takes home a second team All-League honor during her first season with the Mountain Hawks.

Bonthuis, a two-time offensive player of the week, has recorded double-figures in both goals (10) and assists (10), including breaking the single-season assist record (9), previously held by the 2021 defensive player of the Year, Lenke Havas. Bonthuis leads the Patriot League in points (30), is tied for first in game-winning goals (4), and sits tied for third in goals scored and second in assists. Most recently, she has scored a goal in two of her last three matches, including the game-winning goal in a 3-0 victory over Holy Cross that clinched a Patriot League Tournament berth.

Gatelein earns her second All-League second team accolade in three seasons, and has contributed two goals and an assist for five points, but her defense is what set her apart this season. Gatelein, a two-time defensive player of the week, has assisted in the Mountain Hawks in three shutouts this season and caused challenges to the opponents getting the ball through the midfield.

Kahn, who earned a Goalkeeper of the Week once this season, has posted a .741 save percentage this season, and has a goals-against average of 1.99 during her senior campaign. She recorded a career-high 18 saves in Lehigh’s match against Boston University this season and made double-digit saves on three other occasions. Kahn registered three shutouts this year to bring her career total to nine, and has played over 1,116 minutes this year.

Mes has made her presence known on the turf, earning second team All-League, by contributing two goals and five assists for nine points during her first year. Taking home a Rookie of the Week once in her rookie campaign, she was all over the midfield and worked with the defensive unit to post three shutouts this season and held their opponents to three or less penalty corners on six occasions.

Lehigh (11-7, 4-2 Patriot League) earned the No. 3 seed in the 2022 Patriot League Tournament which will be hosted by American on Thursday and Saturday this week. The Mountain Hawks will take on the host Eagles (9-6, 4-2 Patriot League) at 2 pm on Thursday afternoon, which follows the first match of the day between one-seed Boston University and four-seed Bucknell at 11 am Tickets are encouraged to be purchased in advance and can be done so by clicking here. Tickets are priced at $8 for adults, and $5 for youth and seniors and students of participating schools get in FREE. Parking is only permitted in the School of International Service (SIS) or The Katzen Art Center Garage during work hours (8 am – 5 pm on weekdays).Guests using these locations must utilize the hourly rate pay boxes inside each respective garage.