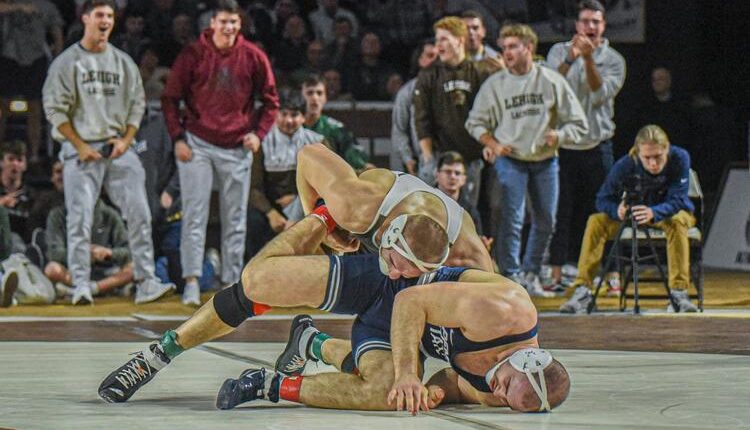 BETHLEHEM, Pa. – In front of just the second 6,000-plus crowd at Stabler Arena in Lehigh wrestling history, the 18th-ranked Mountain Hawks won four bouts against top-ranked and defending national champion Penn State and the visiting Nittany Lions came away with a 24-12 decide Sunday afternoon.

Lehigh won three of the first five bouts to tie the dual 9-9 at the halfway point but Penn State won three straight coming out of intermission to build a 19-9 lead.

In the only bout matching top 10-ranked wrestlers, Lehigh’s ninth-ranked sophomore Michael Beard knocked off No. 1-ranked and former teammate Max Dean 11-9 at 197 for the Mountain Hawks’ fourth win of the day.

The Mountain Hawks move into the exam break at 3-3 in duals, while Penn State improves to 3-0.

“Early on we knew we were going to have to win a minimum of four of those first five matches,” Lehigh head coach Pat Santoro said. “It was tough because I thought we could win those matches.”

The dual started at 125 with first-year Carter Bailey scoring a takedown in the final seconds of the first period, which proved to be the difference in a 3-1 decision over Gary Steen. Defending national champion Roman Bravo-Young did not wrestle for Penn State so Connor McGonagle defeated Karl Shindledecker 6-1 at 133 to extend Lehigh’s lead to 6-0. McGonagle scored takedowns in the first and third periods and racked up more than three minutes of advantage time.

“Anotha one” – Connor McGonagle after this takedown 👀

Penn State secured the next two bouts to take a 9-6 lead. At 141, Beau Bartlett won an 8-4 decision over sophomore Malyke Hines and then Shayne Ness followed with a first period pin over Manzona Bryant IV at 149. Bryant scored the first takedown and led 2-1 when he was caught in a cradle and eventually pinned at the 2:28 mark.

Senior Josh Humphreys scored a pair of first period takedowns and added one more in the third to defeat Terrell Barraclough 6-3 at 157, tying the dual at 9-9 at the halfway point.

“Josh did a really nice job,” Santoro said. “Barraclough usually doesn’t give up more than a takedown a match. We knew it would be a battle and we both wanted odds to have choice there. They’re both bears on top. We knew that would be a challenge, but the way Josh bounced back from the second period was really important, because that’s going to happen at NCAAs. You can’t let things bother you.”

Penn State’s Alex Facundo put the Nittany Lions back on top with a 6-2 decision over junior Brian Meyer at 165. Top-ranked and returning NCAA champions Carter Starocci and Aaron Brooks both picked up victories, with Starocci earning a major decision to extend the Nittany Lions’ lead to 19-9.

The highly-anticipated matchup at 197 lived up to the hype with Beard and Dean combining for 20 points. Beard opened the scoring with a takedown. Dean answered with one of his own and a stalling point on the Nittany Lion tied the bout at 3-3 after one period. Beard scored the first takedown of the second period, but trailed 7-6 after two periods. He escaped early in the third to tie the bout and then scored the only two takedowns of the final period and held his ground over the final 30 seconds to earn the victory.

The Lehigh Valley is pretty 𝒉𝒂𝒑𝒑𝒚 with this Michael Beard takedown 👀🔥

“The fact that they know each other so well and both put so many points on the board was pretty impressive,” Santoro said. “They both enjoyed the atmosphere. That’s why you wrestle. You have to embrace these opportunities and the both wrestled really hard.”

A sellout crowd of 6,032 took in Sunday’s dual, making it the second-highest attendance for a Lehigh wrestling dual at Stabler Arena, behind only the 6,047 that attended the 2019 Lehigh-Penn State dual.

“It was a great atmosphere,” Santoro said. “But it’s kind of an illusion, because when you’re wrestling its no different than what you’re doing in the room every day. The only difference is someone is setting this up. They’re selling tickets. At the end of the day its two guys on a piece of Resilite. Nothing changes. Just do what you’re trained to do, so when you get to the NCAA Tournament, if you keep doing it all the time, you’re not doing anything new It doesn’t matter if there’s 3,000 people there or 20 people there.

“When you try to score points the whole time, it makes it a lot easier.”

The Mountain Hawks will return to action at the Collegiate Wrestling Duals, Dec. 19-20 in New Orleans. Lehigh will face Cal Poly (4 pm CT) and NC State (8 pm CT) on the first day of competition.