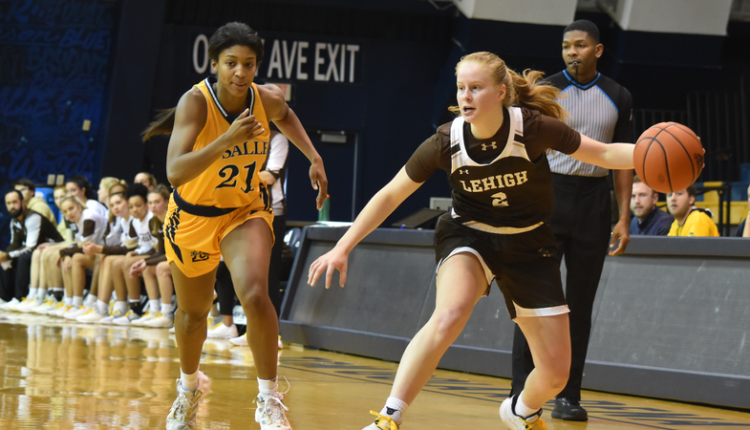 PHILADELPHIA – The Lehigh women’s basketball team outscored La Salle 22-17 in the fourth quarter, but it was too little too late as the Explorers defeated the Mountain Hawks 66-54 Saturday afternoon at Tom Gola Arena.

It was a low scoring game for two teams that averaged over 70 points per game. At halftime, the Explorers led 31-24.

Both teams are known for their three-point shooting, but neither team could get going in Saturday’s game. La Salle was 5-of-24 from beyond the arc and Lehigh was 6-of-29.

“We knew in focusing on us too, we worked on getting up the floor a little bit after Rider since they came out and banked 10 threes,” said head coach Addie Micir. “In the first half, it was kind of on par for prepping for La Salle, too, and so we wanted to try to shut them down there, and I thought that opened up the paint a little bit, and they made us pay. But they’re a good team, and because they took it away, they went to a second option, and it took us a little bit long to find our second option.”

The Mountain Hawks were able to cut La Salle’s lead down to five with 3:46 left in the game off of a Jackie Vargas-Bines layup, but the Explorers went on a 6-0 run.

“We told them at that point, we were 4-for-12, at some point, the ball has got to go in the basket from three,” MIcir said.” It’s a big part of what we do. It’s not the only thing we do, but I know that energizes and excites us, so we pressed them a little bit and forced a couple of turnovers early on. Lily and Ella provided us some great juice, and great energy. We’ve gotta find a way to put it together for 40 minutes, and that’s going to be the focus.”

Lehigh forced five turnovers in that fourth quarter to create some momentum for the Mountain Hawks, but it would not be enough for Lehigh to climb back in the game.

“I thought the best part was we found a way to turn defense into offense in the fourth quarter, and that’s what we needed to do, and we were able to spark ourselves a little there,” Micir said. “Twenty two points in the fourth quarter when you only score 24 at half, so I think that’s a huge positive in figuring out how to get our motors going.”

The Mountain Hawks will be on a break for finals before they host Delaware on Dec. 18. This will be the second-to-last non-conference game for Lehigh before starting league play.

“Focus is going to be on us and getting better,” Micir said.”We need from top to bottom each individual to improve, and that’s going to help us collectively improve. It’s a big time for us, I know their minds are going to be working a ton, but we have got to get their body bodies moving during practice and making sure we keep them on the up-and-up, and we work on the skills we need for each and everyone one of their roles, and we get better that way.”