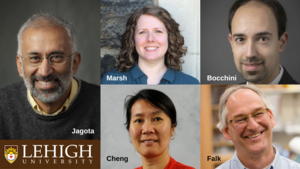 Examining the spread of disease in marginaliz

Imagine if researchers could predict the spread of a pandemic like they can the evolution of a hurricane. With the right data, they could help people stay out of harm’s way.

Harnessing that ability is the bold vision of a multidisciplinary team of Lehigh researchers.

The team recently received a $1 million grant in support of their proposal to examine pandemic dynamics within isolated and underserved populations. The award is part of the National Science Foundation’s new Predictive Intelligence for Pandemic Prevention (PIPP) program, which is jointly funded by NSF’s Directorates for Biological Sciences, Computer Information Science and Engineering, Engineering, and Social, Behavioral and Economic Sciences.

The program’s mission is to promote convergent research in prediction and prevention to address grand challenges in infectious disease pandemics, and it consists of two phases. During Phase I, 18-month development grants will support novel, cross-disciplinary approaches to addressing a critical problem within predictive intelligence specifically targeted to pandemic prevention. Phase II will grant funds toward the formation of a formal research center (with more details forthcoming around 2023).

Central to the program’s mission is its emphasis on diverse, multidisciplinary teams that span research across engineering, computer science, biology, and the social sciences.

“When the Phase I call for proposals came out, we recognized that Lehigh had expertise in all of these areas,” says bioengineering and chemical and biomolecular engineering professor Anand Jagota, the university’s vice provost for research and the project’s lead researcher. “But these faculty members had not worked together around a common theme.”

To be competitive they needed to identify what set them apart from other applicants. The answer soon became clear.

“What really distinguishes Lehigh as an institution is the Institute for Indigenous Studies (IIS) within our new College of Health,” says Jagota, who previously served as the college’s associate dean of research. “The institute gives us access to communities that, historically, have suffered disproportionately compared to the general population in every pandemic going back more than 100 years. Having this connection gave us a unique angle to look at the problem of pandemic prediction and prevention.”

The IIS partners and collaborates with Indigenous peoples, nations, communities, and organizations to improve their well-being. Under the auspices of their proposal, Jagota’s team—which includes 13 faculty members, two industry collaborators, the healthcare provider Geisinger (which will serve as both a research collaborator and clinical partner), and members of the Cheyenne River Sioux and Prairie Band Potawatomi tribes —will examine how disease, in this case influenza, affects underserved and isolated indigenous communities in various parts of the country.

They’ll do this through an innovative collaboration that cuts across the fields of engineering, biology, data science, and cognitive psychology, and their approach is organized around four research thrusts.

The first will be led by Jessecae Marsh, an associate professor of psychology in Lehigh’s College of Arts and Sciences (CAS), and will establish the belief system around disease within indigenous communities.

The second thrust will model virus spillover and spread, and will be headed by Paolo Bocchini, a professor of civil and environmental engineering in Lehigh’s PC Rossin College of Engineering and Applied Science.

“We’ll be using our Catastrophe Modeling Framework,” says Bocchini. “It’s a modeling approach that started with natural disasters, but we’re trying to push well beyond that now. In fact, we’ve been applying it to diseases like Ebola. In Phase I of this PIPP grant, we’ll work on modeling spillover from animals to humans, and start laying the groundwork for probabilistic models detailing spread among the human population.”

Xuanhong Cheng, a professor of bioengineering and materials science and engineering in the Rossin College, will lead the third thrust, which will focus on developing point-of-care diagnostic devices, as many of these communities are often located far from testing centers.

The fourth thrust has two aspects, says Jagota, and will seek to determine if researchers can detect the biological basis of why some people get sick and some people don’t and whether a person’s genetics or environment “is the main culprit.”

Biological sciences professor Mattias Falk (CAS) will examine how viruses are transmitted from cell to cell, and how that might lead to variability in the response to infection. Jagota will look specifically at the role of the glycocalyx, the protective layer that surrounds the cell.

“We hypothesize that this glycocalyx is very important in determining whether the virus sticks to the cell or not,” he says. “The cell membrane has a bunch of hairy molecules on its surface, which the virus has to get through, and so far, researchers have sort of ignored that fact. We’re pursuing the hypothesis that the variability with which the virus sticks may have to do with the variability of the glycocalyx, and that may have to do with your environment or with genetics.”

To that end, he’ll develop an assay to directly measure how strongly a viral particle sticks to a cell surface as the nature of its glycocalyx is manipulated.

“In Phase I, we just want to see if we can do this with cells in a model system,” he says. “If we’re funded for Phase II, we’ll use human samples.”

The team will have 18 months to gather preliminary data to show proof of concept—that the combination of these approaches could yield successful prediction models in these areas. The ultimate goal is to secure funding in Phase II for the establishment of a research center (the amount and duration for which is still unknown).

“The idea is to create a center in which we’re able to use computational modeling, engineering, biology, and social science to predict pandemic spillover and spread in underserved and isolated communities,” says Bocchini. “The hope is that what we learn will have relevance at the national scale because protecting these communities is a way to protect all of society.”

There’s an additional element to this project unrelated to pandemic prevention, but very much in keeping with NSF’s push toward promoting convergent science. Throughout the 18-month, Phase I data-gathering period, a team led by psychology professor Kate Arrington will study the group itself, specifically, its dynamics and effectiveness in conducting team science. To facilitate this line of inquiry, all meetings will be recorded and representatives from each thrust area must attend each meeting. Arrington will examine team member interactions, publications, and progress.

“We decided that because our group is so large, it would be a great opportunity to study how well we do team science,” says Bocchini. “How we interact, how effectively we communicate, how easily we adjust our scientific protocols to make them compatible with someone else’s. I think the most interesting research projects really happen at the intersection of various disciplines, so I find the idea of ​​studying how we work together fascinating.”

There’s a tremendous amount of work to be done for the team to make it to the next step. But Jagota is optimistic. Their group is a formidable one, united by the potential for impact of a center devoted to pandemic prediction and prevention in indigenous communities—and ultimately society at large.

“One of our researchers, Thomas McAndrew [an assistant professor in the College of Health] says it best,” says Jagota. “We’d like to be able to contribute through surveillance, through measurement, through psychological work to predict the progression of a pandemic. Just the way people can predict the weather right now.”