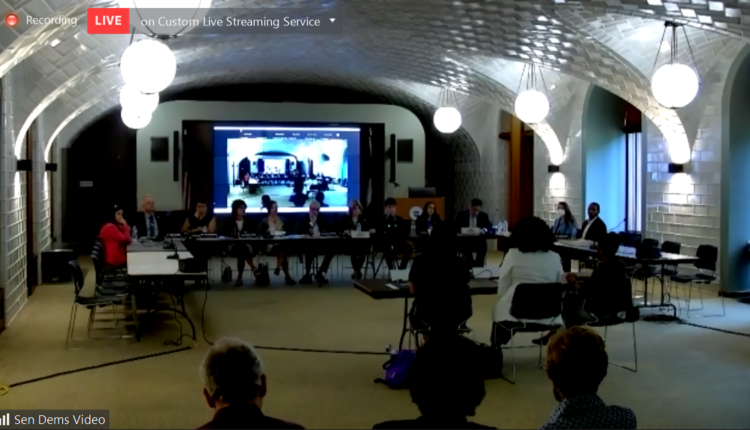 At a joint Women’s Health Caucus hearing at Chatham University in Pittsburgh, providers and experts in reproductive health care said that Pennsylvania, which has 17 facilities providing abortion care, has become an access point for pregnant persons seeking an abortion in neighboring states where bans have been implemented since the U.S. Supreme Court’s June 24 decision to overturn Roe v. Wade.

The meeting, which was the third in a series of hearings on reproductive health care in post-Roe Pennsylvania, focused heavily on the impact that the increased patient load and confusing and contradicting legal landscape has had on the commonwealth’s abortion providers.

The panelists discussed the effects that abortion bans in other states have had on clinics within the commonwealth, specifically bans imposed in Ohio, Indiana and West Virginia.

Sheila Ramgopal, the CEO of Allegheny Reproductive Health Center, said that the center has seen an increase in patients and calls since the June 24 decision to overturn Roe v. Wade.

Ramgopal said the center has seen its call volume increase to 10 times pre-Dobbs v. Jackson – the Supreme Court case which overturned Roe v. Wade – levels and has seen its percentage of out-of-state patients climb from approximately 30 percent to between 60-70 percent.

“It’s only going to get worse,” Etheredge said, telling lawmakers that work is needed to increase care capacity at facilities providing abortion services to build “sustainable” infrastructure to adequately care for people seeking abortions both in Pennsylvania and beyond.

“As more states push abortion restrictions and bans, patients will continue to look to Pennsylvania as an access point for care,” Etheredge said. “With 85 percent of counties in the commonwealth without an abortion provider, only 17 clinics left in the state, and many providers still dealing with the impact of COVID-19 on our health care workforce, there is already so much we are all up against.

“Despite the strain, this has put on our centers–not to mention the challenges travel and other barriers can put on patients–our staff continues to do all they can to ensure that patients get the care they need when they need it,” she continued.

Panelists also did not hold back in sharing the challenges that abortion providers face in attempting to keep abortion costs low for patients.

Ramgopal said that the Allegheny Reproductive Health Center and other providers have largely been able to keep the cost of abortion services the same as they were in the 1970s – around $500 – despite the fact that the cost should be around $2,000 due to inflation.

Luckily, Ramgopal said, a ten-fold increase in donations to their local abortion fund since the Dobbs decision was handed down in late June has allowed the center to subsidize “nearly 100 percent” of the costs for those traveling from other states to obtain abortion care.

Panelists also expressed concern about how SB106, a constitutional amendment package that contains language stipulating that there is no constitutional right to an abortion in Pennsylvania, will affect access to potentially life-saving reproductive health care.

“Pennsylvania anti-abortion legislators passed an anti-abortion constitutional amendment in the middle of the night and behind our backs–without dialogue from advocates, providers, or patients,” Etheredge said. “The outcome has left many of us outraged as the process of amending our state constitution is being used to threaten our most basic and fundamental right: health care. It is clear we are confronting the fight for our lives.”

La’Tasha Mayes, a reproductive justice advocate and Democratic candidate for Pennsylvania’s 24th House District, told lawmakers that the constitutional amendment, which could go before voters as soon as May 2023, “won’t work.”

“The people of Pennsylvania will vote this amendment down in flames,” Mayes said.

KHN’s ‘What the Health?’: A Big Week for Biden