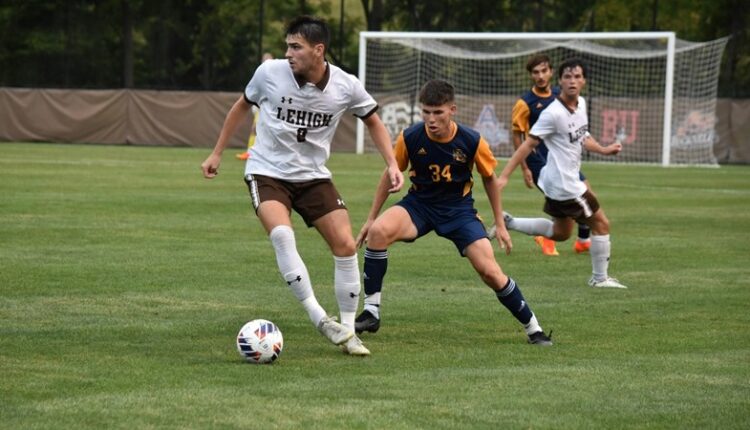 LEWISBURG, Pa. – Senior Jack Sarkos scored his sixth goal of the season to help Lehigh erase a 1-0 halftime deficit, but Bucknell’s Sebastian Paz scored with just under seven minutes remaining to give the host Bison a 2-1 win over the Mountain Hawks Wednesday night at Emmitt Field.

Paz’s goal broke a 1-1 deadlock and while Lehigh pressed for a late equalizer, Bucknell (2-7, 1-2 Patriot League) picked up its first league win of the season, while Lehigh falls to 2-5-1 overall and 1-2 in the league.

Lehigh had three shots on goal in the game’s first 20 minutes with Bucknell goalkeeper Freddie Lapworth coming up with three saves.

The Mountain Hawk defense came up with a key stop in the 21st minute as a Bucknell corner kick was deflected towards Lehigh’s goal line, but a group of several players, including senior Thatcher Cooper, sophomore Yoni Aidlberg and sophomore goalkeeper Ryan Gross somehow found a way to keep the ball from crossing the goal line.

Just over a minute and a half later, Bucknell took the lead as Mo Tall converted a free kick from about 20 yards to give the Bison a 1-0 lead. Sophomore Perry Kingson fired one more shot in the half, but Lapworth made the stop to keep Bucknell ahead at the break.

Gross made a couple of saves in the opening minutes of the second half to keep Lehigh within one. In the 52nd minute, the Mountain Hawks pulled even when Sarkos scored on a clean header following a cross by first year Jason Pynadath from the right wing.

Bucknell’s go-ahead goal came in the 84th minute as MJ Kuczura played the ball in for Paz, who finished from the right side of the penalty area.

Lehigh pressed for a tying goal in the final minutes, earning a pair of corners, but was unable to capitalize. Kingson fired Lehigh’s final shot of the night over the crossbar with just under 40 seconds remaining.

Shots finished 22-9 in Bucknell’s favor including a 7-5 edge in shots on goal. Lehigh led in corner kicks by a 7-5 margin.

Gross made five saves for Lehigh, while Lapworth stopped four shots, all in the first half, for Bucknell.

“We had disappointing performances from too many players and you can’t win Patriot League games if you don’t perform at your best,” Lehigh head coach Dean Koski said. “As a coaching staff we did a poor job getting our team ready for this match. They out-worked us and out-played us and wanted to win more than we did.”

The Mountain Hawks return to the Ulrich Sports Complex to host Holy Cross Saturday at 6 pm The contest will be broadcast on ESPN+.