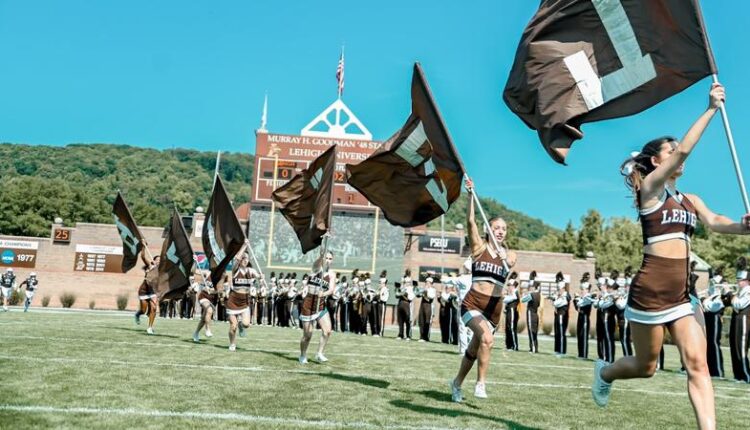 BETHLEHEM, Pa. – Lehigh opens the month of October with back-to-back home games, beginning Saturday as the Mountain Hawks host Monmouth on Dog Day, presented by JFR Salvage. The Mountain Hawks battled defending Ivy League champion Princeton to a 10-10 tie through 30 minutes last week but four third-quarter miscues led to 13 Tiger points as Lehigh ultimately fell 29-17. Lehigh did pick up a pair of Patriot League weekly awards as junior linebacker Mike DeNucci was named Defensive Player of the Week after an 11-tackle, three-sack effort; and first-year wide receiver Geoffrey Jamiel was named Rookie of the Week after a five-catch, 81-yard performance. Monmouth picked up a 49-42 win over No. 9/10 Villanova to even its season record at 2-2.

Through four weeks, Lehigh leads the Patriot League and ranks 19th nationally in rushing defense, allowing 94.3 yards per game. The Mountain Hawks have held their last two opponents under the 100 yard mark. Lehigh held Richmond to just 49 yards on the ground, marking the fifth time in Tom Gilmore’s tenure that the Mountain Hawks have held an opponent under 50 rushing yards. The Mountain Hawks’ rush defense will be tested by Monmouth’s Jaden Shirden, who leads the FCS in rushing with 664 total yards and an average of 166 yards per game.

Senior Dean Colton was able to live a lineman’s dream at Princeton as he intercepted a Blake Stenstrom fourth-quarter pass and rumbled 52 yards for his first career touchdown, which brought the Mountain Hawks within 12 points in the fourth quarter. Colton delivered the first interception return for a touchdown for the Mountain Hawks since Marquis Wilson’s 65-yard pick-six against Bucknell in 2018. The senior captain became the first Lehigh defensive lineman to return an interception for a touchdown since Royce Morgan returned a pick 45 yards for a score against Saint Mary’s on Oct. 11, 2003.

Lehigh has 26 first-year student-athletes on its roster and recent history shows that many will be relied upon to contribute right away. Nine first-years appear on Lehigh’s depth chart with wide receiver Geoffrey Jamiel, offensive linemen Aidan Palmer and Langston Jones and cornerback Michael Jordan currently penciled in to start. Nine first-year Mountain Hawks have seen action in each of Lehigh’s first four games including three starters on offense (Jamiel, Palmer and Jones). Linebacker Brycen Edwards and quarterback Brayten Silbor made their Lehigh debuts at Princeton. Twelve of Lehigh’s 18 sophomores appeared in at least one game during the 2021 season.

One of Lehigh’s strengths last season was its ability to get to opposing quarterbacks. The Mountain Hawks ranked second in the Patriot League with 25 sacks and registered at least two sacks in nine of their 11 games, with a season-high of four against Holy Cross. The Mountain Hawks were held sackless at Fordham but had 13 over their last four games. Lehigh utilized a balanced attack with Mikhari Sibblis leading the way with 4.5 Trevor Harris following with four. The Mountain Hawks return players that accounted for 20.5 of their 25 sacks. Behind a five-sack effort at Princeton, Lehigh leads the Patriot League with 11 sacks through four games. Junior Mike DeNucci leads the way with four, while senior Nate Norris and junior Sam Sheridan both have two.

Monmouth comes to town with a 2-2 record as the Hawks have followed up season-opening losses to New Hampshire and Fordham with wins over Georgetown and Villanova. Last week, Monmouth outscored the ninth-ranked Wildcats 49-42 on the main line. Jaden Shirden rushed for 211 yards and two touchdowns in the win and currently leads the FCS in overall rushing yards (664) and rushing yards per game (166). Tony Muskett quarterbacks an offense that is averaging 41 points and 501 yards per game. Monmouth allows nearly 33 points and 461 yards per game on defense, with Da’Quan Grimes owning a team-best 31 tackles.

Lehigh and Monmouth are meeting for the ninth time. The Mountain Hawks won the first five meetings, before the Hawks claimed the last three. Lehigh is 3-2 against Monmouth at Goodman Stadium. Tom Gilmore went 1-2 versus Monmouth as Holy Cross’ head coach. These teams first met in 1999, a 56-10 Lehigh victory.

The Mountain Hawks return to Patriot League play next weekend when they complete a two-game home stand by hosting No. Fordham on Tackle Cancer Day presented by Red Robin in partnership with the Leukemia and Lymphoma Society (LLS). The Rams visit Goodman Stadium for the first time since 2018 as Lehigh looks to avenge a loss in the Bronx last October. Game time is set for noon.