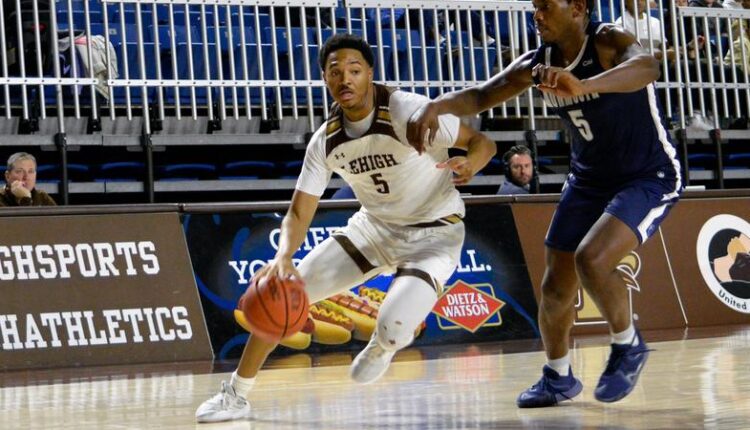 BETHLEHEM, Pa. – The Lehigh men’s basketball squad remains unbeaten at home as the Mountain Hawks defeated Monmouth 80-76 inside Stabler Arena on Sunday night. Lehigh improves to 4-2 on the year as the Hawks fall to 0-7 overall. This is the Mountain Hawks’ first win over Monmouth since November of 2018 and snaps a two-game skid in the series.

Monmouth opened the contest with a 4-0 lead but the Mountain Hawks countered and tied things up at 7-7 with 15:53 ​​to play in the first half. The Brown and White scored six-straight before the next bucket from the Hawks. Monmouth continue to inch closer to the Mountain Hawks and both squads were tied at 18-18 with just over 11 minutes remaining. The Hawks stretched their advantage to as many as seven points with under six minutes to play as Lehigh strung together a run to knot the game at 33-33. A Monmouth 3-pointer put the Hawks ahead 38-37 but a fast-break basket from senior Evan Taylor gave the Mountain Hawks the one-point lead heading into halftime, 39-38.

Sinclair goes up and under for two! Monmouth is now leading Lehigh 24-22. #GoLehigh

Lehigh opened the second half with three 3-pointers to push the lead to seven points, 48-41, and extended it to eight points on two occasions, including 56-48 with 13:36 to play in regulation. Monmouth fought back and even took the lead back at 61-60, but that was the last time the Hawks were in front. A 3-pointer from junior Jalin Sinclair put the Brown and White back ahead, including a few ties, the last occurrence coming with 2:03 left in the contest. The fourth and final 3-pointer from Taylor with 1:43 to play gave Lehigh the lead for good.

AND ONE!! Taylor puts Lehigh back in front of Monmouth with 7:38 to play in the second half. #GoLehigh

Lehigh had four different student-athletes finish in double-figures in points, led by Taylor, who scored 25 points, with 17 of them coming in the second half, after shooting 8-for-13 from the field, 5-for-8 from long-distance and 4-for-5 from the free throw line. Taylor also brought down four rebounds and had one block while sophomore Keith Higgins Jr. tossed in 14 points and grabbed six boards to go with a team-high three assists. Sophomore Tyler Whitney-Sidney added 13 points on one 3-pointer and a perfect 10-for-10 at the free throw line, with four rebounds and two steals. Sinclair rounds out the Mountain Hawks who finished in double digits, scoring 12 points, an assist and a rebound.

Finishing the night just one point and one rebound shy of a double-double was junior JT Tan, who contributed nine points and team-high nine rebounds to go along with one block and one assist.

Lehigh returns to action on Wednesday, Nov. 30 when the Mountain Hawks travel to Princess Anne, Md. to take on Maryland Eastern Shore at 7 pm The game will be broadcast on Fox Sports Radio at 94.7 FM and 1230 AM.