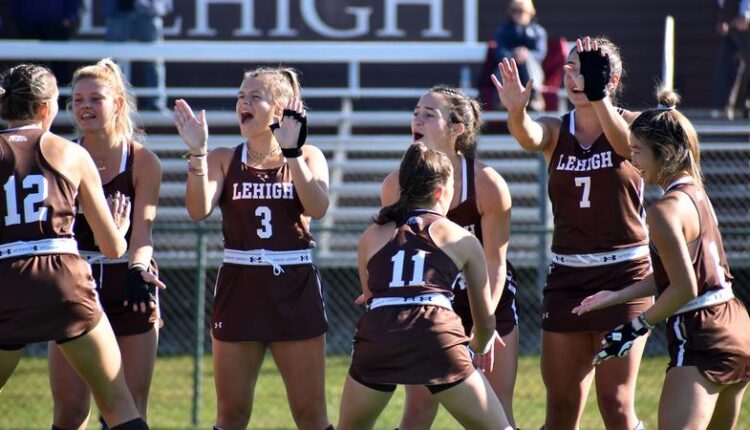 BETHLEHEM, Pa. – The Lehigh field hockey team returns home to Ulrich Field to finish their regular season schedule. First, the Mountain Hawks host on Colgate in Patriot League action Saturday starting at 11 am on ESPN+, as the program honors it seniors. The Mountain Hawks will then close out the year with a non-league contest versus Columbia on Sunday, with the match beginning at 1 pm

Lehigh would score the first goal of the game in the first period when senior Sarah Bonthuis scored on a reverse shot that was blasted into the back of the cage. Junior Lotte Smorenburg scored the second goal of the match after an initial shot from Maddie Kandra and give the Mountain Hawks a 2-0 lead.

The Mountain Hawks were able to get the third and final goal of the contest into the back of the cage from sophomore Eleni Kountroubis, who notched her third goal of the season off an assist from Bonthuis. Bonthuis’ assist puts her at nine this season, which ties the school record for assists in a single season, set by recent graduate Lenke Havas during 2018. Senior goalkeeper Maddie Kahn recorded three saves to record her second shutout of the season and the eighth blank slate of her career.

Julia Gatelein was named the Defensive Player of the Week for the second time this past week, set herself apart from others and was a crucial part of the defense that shutout Holy Cross on Saturday. She was all over the field and making things difficult for the Crusaders to get passes through the midfield. Gatelein and the Lehigh defense did not allow a single penalty corner in the first half and held the Crusaders to just four in the match.

Senior Sarah Bonthuis leads Lehigh in scoring with nine goals and nine assists, followed by junior Abbie Brown’s seven goals. Senior Maddie Kahn enters the weekend with a 2.21 goals-against average and a .727 save percentage in 16 starts.

Colgate (3-14, 0-5 Patriot League) comes to Bethlehem on Saturday and enters the match on a three-game losing streak, most recently falling to Lafayette, 5-1 last weekend. Junior Ella Murphy leads the Raiders with six goals and five assists for 17 points. Junior Rachel Alderfer has recorded a team-high four defensive saves while senior goalkeeper Anna Unger has made 17 starts this season with 83 saves for a .606 save percentage.

Lehigh and Colgate are tied 19-19-1 in the all-time series and the Mountain Hawks have won the last six matchups, the last victory coming in Hamilton a year ago as Lehigh defeated the Raiders, 7-2.

On Sunday, Lehigh will go head-to-head with Columbia (5-10, 3-3 Ivy League) in non-league action to finish the regular season. The Lions are looking to rebound from a 7-2 loss to Penn on Friday. Junior Maya Walker leads the team with five goals, three assists and 13 points. First year MK Myklebust sits one goal behind with four for the year. Sophomore goalkeeper Katie Wimmer has made 15 starts and 104 saves this season.

The Mountain Hawks have clinched a playoff berth in the Patriot League Tournament that will be hosted by American, beginning Thursday. Lehigh awaits to see how this weekend’s contests play out for seeding in the tournament.

The league announced Friday afternoon that both American and Boston University clinched top-two seeds entering the final weekend of the regular season based on the Patriot League’s tie-breaking procedures. Patriot League policies state the highest seed hosts the championship; however, if the highest seed cannot host, then the option moves in descending seed order. With Boston University unable to host due to the unavailability of its home and/or a local alternative facility, American will welcome the four-team field to Washington, DC, for the third time in the last five seasons, regardless of the outcomes of this weekend’s contests.