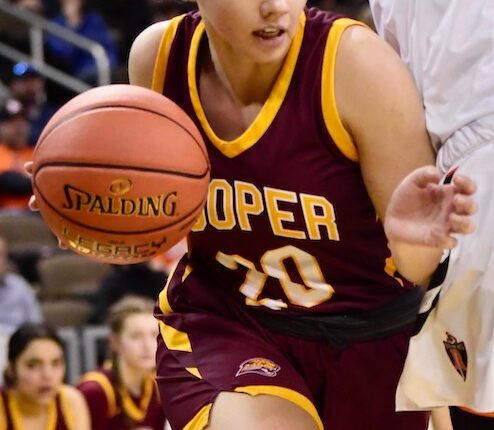 A team from the 33rd District has played in six of the last seven 9th Region girls basketball championships games. There’s a good chance that will happen again this season because the top three teams in the Northern Kentucky coaches preseason poll are all members of that district.

Cooper and Ryle, the winner and runner-up in last year’s region tournament, were voted No. 1 and no. 2 in the poll with Conner taking the No. 3 spot. The games they play against each other during the regular season will determine pairings for the 33rd District tournament with the two finalists advancing to the region.

Cooper received 13 of the 14 first-place votes in the coaches poll. The Jaguars have four starters back from last year’s 25-10 team that won the program’s first region championship and made it to the semifinals of the state tournament.

One of the returning starters is 6-foot-2 senior forward Whitney Lind, who had team-high averages off 16.7 points and 6.4 rebounds. She was named second-team all-state in a statewide poll of coaches and made a verbal commitment with Lehigh University in Pennsylvania last summer.

The Jaguars’ other returning starters are juniors Liz Freihofer and Logan Palmer and senior Kay Freihofer. Both of the Freihofer sisters were double figure scorers in last year’s region championship game with Kay being named most valuable player.

The other key contributors back from last season’s roster include juniors Maleah Alexander and Bella Deere, who both played in 34 games. Haylee Noel is a talented eighth grader who’s already drawing attention from college recruiters.

Cooper coach Justin Holthaus said leadership from the returning players and everyone understanding and fulfilling their roles will play a major part in the team’s success once again this season.

“The Lady Jaguars will rely on length and athleticism on the defensive end that held opponents to 41 points per game last season as a staple for the program success,” Holtman said. “Overall experience and depth will also play a crucial role in the team’s success as they face a difficult schedule.”

Here’s a look at the other girls basketball teams ranked in the top 10 by the local coaches poll: 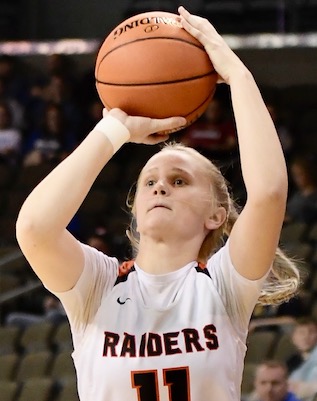 The Raiders have won 20 or more games each of the last five years and there’s no reason to think they can’t do it again this season with the top four scorers back from a 9th Region runner-up team that posted a 21-10 record .

The top returning player is 6-foot senior Abby Holtman, a University of Cincinnati recruit who averaged a team-high 15 points with 3-point goals accounting for 47 percent of her scoring. She was also the team’s best free throw shooter, hitting 74 of 93 for 79.6 percent.

The three teammates behind Holtman in scoring average were junior Quinn Eubank (13.0), senior Austin Johnson (12.2) and junior Sarah Baker (9.2). Eubank also pulled down a team-high 9.8 rebounds per game while Johnson and Baker had a combined average of 9.7 on the boards.

Ryle coach Katie Haitz is counting on those veteran players to lead the Raiders back to their glory days when they won three consecutive 9th Region championships from 2018-20 and the 2019 state title.

The long list of returning players on Conner’s roster did not like the way last season ended. They took a 17-game winning streak into the 33rd District playoffs and lost to Cooper, 51-18, in a first-round game.

There was only one senior on that 22-4 team so the rest of the Cougars get a chance to dispel their disappointment this season with junior Anna Hamilton and seniors Juliet Strange and Kelsee Simpson leading the way.

“Anna has emerged as a premier point guard in the area with multiple Division I offers to play at the next level,” Conner coach Michelle Gambrell said of the guard who averaged 16.9 points and 3.7 rebounds and shot 45 percent (65 of 144) from 3 point range last season.

Strange averaged 10.9 points and 5.6 rebounds. The Cougars will rely on her, Simpson and senior Emily McGraw to provide leadership, pick up the bulk of the rebounding and play good defense, according to Gambrell. 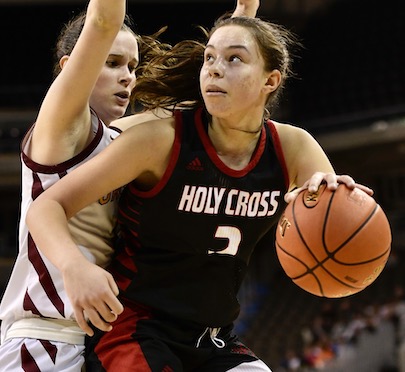 With all but one player returning from last year’s 19-14 season and three transfer students joining the roster, Holy Cross coach Ted Arlinghaus said depth will be his team’s strong suit this season.

The four returning starters include 6-foot-3 junior center Julia Hunt, who had team-high averages of 16 points, 10.9 rebounds and five blocks per game. She was considered one of the state’s top college prospects in basketball before accepting a volleyball scholarship offer from the University of Washington.

The Indians also have guards Aleah Arlinghaus, Miyah Wimzie and Elizabeth McCoy back in the lineup. Arlinghaus is a senior point guard who averaged 6.5 points and six assists on last year’s team that won the 9th Region All “A” Classic championship and made it to the semifinals of the small school state tournament.

One of the transfer students added to the Holy Cross roster is senior Nejai Lewis, who averaged 15 points and 11.1 rebounds for Holmes last season.

The Colonels have a trio of seniors — Sammy Berman, Ella Steczynski and Reese Smith — who want another 9th Region championship trophy to go along with the one they helped win as sophomores in 2021.

All three of them were starters on last year’s team that lost in the region semifinals and finished with a 25-8 record. Berman and Smith were double-figure scorers with averages of 12.8 and 11.1 points per game. Steczynski was the floor leader, contributing 8.6 points, 3.8 assists and 3.5 steals.

Dixie Heights coach Joel Steczynski said his daughter, Berman and Smith will have a talented supporting cast that gives the team balance and depth. The other two returning starters are freshman forward Caralee Pelfrey and sophomore guard Catherine Buddenberg, who both averaged six points per game last year.

“Both have a knack for scoring, which will make it increasingly difficult for teams to defend five players who have the ability to score double figures on any given night,” the coach said. 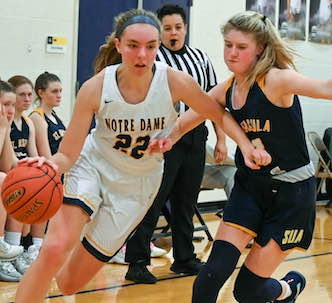 The top-ranked team going into the 9th Region tournament last season was Notre Dame, but the Pandas were upset by Ryle, 53-51, in the opening game and finished with a 23-3 record.

The only starter returning from that team is senior guard Noelle Hubert, who averaged 12.9 points and was among the state’s leading 3-point shooters, hitting 85 of 210 for 40.5 percent. She made a commitment with Northern Kentucky University during the offseason.

The lone senior on the Bluebirds’ roster is guard Alyssa Harris, who averaged 5.4 points and two assists on last season’s 12-17 team despite a foot injury that limited her to playing in just 13 games.

“She is an outstanding leader that makes her teammates better on and off the floor,” Highlands coach Jaime Richey said of Harris, who has played varsity basketball since she was a freshman.

Most of the other players on the Highlands’ roster are sophomores. One of them is 6-foot-3 center Marissa Green, who averaged 14 points and 9.6 rebounds while shooting 57.4 percent (148 of 258) from the field.

“We will be very young again,” coach Richey said. “Our outlook is to keep building on solid program fundamentals and gaining experience. I was very happy with how we improved from the start of last year to the end.”

With the top three scorers and rebounders returning, coach Todd Smart expects the Crusaders to improve on last year’s 16-14 record and make it to the 34th District final to reach the 9th Region tournament for the first time since 2018.

Kayla Unkraut is a junior guard who averaged 12.9 points and 5.4 rebounds and reached the 1,000-mark in career scoring last season. The two teammates behind her in scoring average were senior Chilota Iloegbunam (8.3) and sophomore Taylor Hill (6.8). Both of them also contributed five rebounds per game.

“Kayla and Chilota will be our go-to players this year,” coach Smart said. “Chilota is a senior that has been a part of the program since eighth grade. She truly is a leader and is looking forward to finishing out her senior year in style.”

The other seven juniors on St. Henry’s roster saw action in 18 games or more last season. Smart said he has more varsity experience on this team than any of his previous three seasons as head coach of the Crusaders.

Brenden Stowers was hired as Simon Kenton’s head coach last spring after his father, Jeff, retired with a 427-180 record and five 8th Region championships over the last 20 seasons he was in charge of the program.

Nine of the 16 players on the new coach’s roster are sophomores or younger. The one returning senior starter is 5-foot-10 forward Emilee Eggleston, who averaged 10.6 points and 4.9 points during last year’s 17-13 season. Two guards who saw a good amount of playing time are junior Ava Slusher and eighth-grader Brynli Pernell, who both averaged five points per game.

Junior guard Rylee Flynn and 6-foot freshman forward Anna Kelch are among the other players who have impressed the new coach with their talent and work ethic during practice sessions.

The Bearcats won six of their last nine games last season to finish 15-14 and extend their string of winning records to 15 in a row. This year’s team will try to continue that run of success with a reduced roster led by three seniors.

“We expect our three seniors to be our consistency this season,” coach Rianna Gayheart said of Jenna Rodgers, McKaila Hatton and Grace Brewer. Rodgers had team-high averages of 15.1 points and 8.2 rebounds on last year’s team that won its fourth consecutive 32nd District championship to qualify for the 8th Region tournament.

Gayheart is looking for 6-foot-2 sophomore forward Braylin Terrell to be a major force at both ends of the floor. The other candidates for the starting lineup are sophomore Campbell Christy and eighth-grader Erin Logue.

“Our numbers are low this season,” the coach said, “but as long as we are able to keep everyone healthy I think we can make a run at a regional title.”

What the midterm results say about U.S. voters in 2022 | Opinion