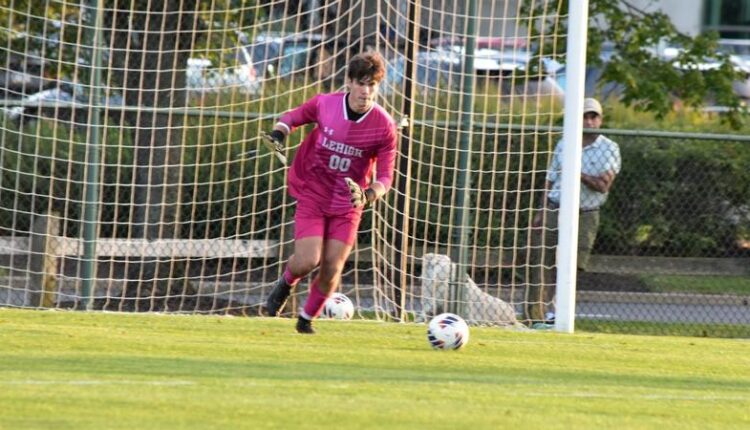 BETHLEHEM, Pa. – The Lehigh men’s soccer team will be on the road Wednesday as they travel to Lewisburg, Pa. to play Bucknell at 7 pm The Mountain Hawks will then return home to Ulrich Sports Complex on Saturday to host Holy Cross. Kickoff is set for 6 pm against the Crusaders. Both games will be streamed on ESPN+.

Currently 1-1 in Patriot League play, the Mountain Hawks (2-4-1) are looking to bounce back from a 1-0 loss to defending league champion Loyola on Saturday

Sophomore goalkeeper Ryan Gross was recognized with a Patriot League honorable mention after his performance last week. Gross made two saves in a shutout win over Delaware last Tuesday and then made a career-best five saves after facing 20 shots against the Greyhounds.

Senior forward Jack Sarkos continues to lead the Mountain Hawks in both goals and assists for the season, earning him a total of 11 points so far. Sophomore Yoni Aidlberg scored the game-winner against Delaware last Tuesday.

Bucknell (1-7) has lost his last four games and is currently 0-2 in Patriot League play. On Saturday the Bison fell 2-1 to American, an opponent that Lehigh beat 4-0 in its opening Patriot League game of the season. Bucknell has scored six goals via six different goal scorers.

Lehigh currently leads the series against Bucknell 30-29-10, however the Bison secured a 1-0 win in overtime last year.

Holy Cross (4-5) has yet to garner a win in the Patriot League as the Crusaders are 0-2 in conference games with losses to Lafayette and Army. On Wednesday, Holy Cross begins its road trip with a game against Colgate in Hamilton, NY before the Crusaders travel to Bethlehem for Saturday’s game against Lehigh.

Senior midfielder Jack Ostrosky has been a standout for the Crusaders this season after earning Patriot League Midfielder of the Week on Sept. 12. He has scored three goals this season and single-handedly secured Holy Cross’s win against Iona by tallying both goals in the game . Evan Jones has four goals and nine points to lead the Crusaders.

The Mountain Hawks and Crusaders are in close competition with their overall meeting record of 14-14-6. Last season, Lehigh fell to Holy Cross 1-0 at Worcester last October.

What to know about mail-in voting ahead of Pa. Nov. 8 general election