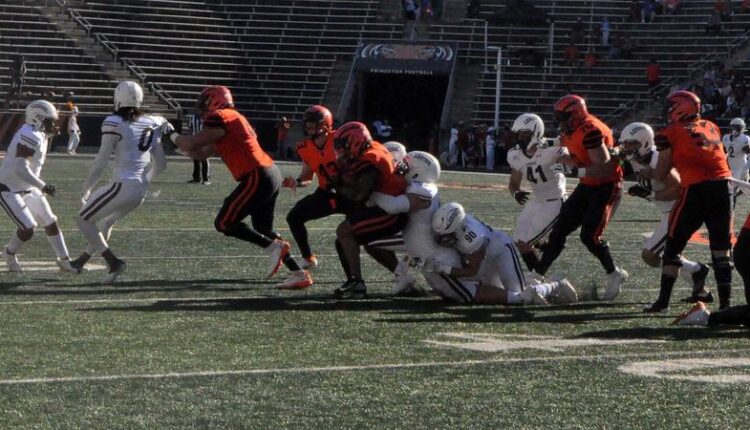 PRINCETON, NJ – Lehigh hung tough with defending Ivy League champion Princeton through the first 30 minutes, but the Tigers turned four Mountain Hawk third-quarter miscues into 13 points to break a 10-10 tie on the way to a 29-17 victory Saturday at Princeton Stadium. Princeton forced three turnovers and blocked a punt in the third quarter to key its second straight win, while Lehigh dropped its second straight to fall to 1-3 on the season.

A strong Lehigh defensive effort limited Princeton to 353 total yards (including just 200 in the first three quarters) and just 62 on the ground. The Tigers were held in check until a 65-yard touchdown pass from Blake Stenstrom to Andrei Iosivas with 11:04 to play put Princeton up by 19.

Lehigh scored on his first drive of the game on a five-yard pass from junior Dante Perri to classmate Eric Johnson and added a second touchdown on a 52-yard interception return touchdown by senior defensive lineman Dean Colton.

“I’m disappointed with the result,” Lehigh head coach Tom Gilmore said. “As much as we made some mistakes in the first half, we also did a lot of really good things. We had some momentum coming out of halftime and it seemed to fall apart in the first couple of series. We turned the ball over and gave up a couple of big plays. When we went down 23-10 it changed the nature of the game.”

Princeton took the opening kickoff and moved 75 yards in 11 plays, taking a 7-0 lead on a three-yard Ryan Butler rush. A 51-yard kickoff return by senior Jalen Burbage set Lehigh up in good position and Lehigh answered with a nine-play, 46-yard drive capped by Johnson’s second touchdown catch of the season.

On Princeton’s next possession, senior TyGee Leach came through with Lehigh’s first takeaway of the season, intercepting Stenstrom to stop a Tiger drive. Lehigh’s ensuing drive was capped by a 35-yard Dylan Van Dusen field goal to put the Mountain Hawks up 10-7. Princeton answered with a 44-yard Jeffrey Sexton field goal and both defenses took over from there as the game was tied 10-10 at halftime.

Perri was intercepted by Nicholas Sanker on the third play of the third quarter and four plays later John Volker scored from two yards out to put the Tigers back in front. Lehigh’s next possession ended with a punt that was blocked by Princeton, but the Mountain Hawk defense held the Tigers to a field goal.

Lehigh’s four third-quarter possessions ended with three turnovers and a blocked punt as Princeton capitalized with the go-ahead touchdown and two field goals.

“We put the defense in some tough situations in the third quarter, but overall, they did a good job,” Gilmore said. “We held them to a couple of field goals and held them without a first down. There were some good things defensively, but also some things we’re going to have to improve on this week to take that next step.”

Colton provided a late boost when he made a leaping grab of a Stenstrom pass and rumbled 52 yards to bring Lehigh within 12.

Perri finished 13-of-20 for 104 yards with one touchdown and two interceptions. First-year Brayten Silbor played the final quarter and went 3-for-6 for 66 yards.

The top receiver for Lehigh was first-year Geoffrey Jamiel, who hauled in five for 81 yards, including a 48-yarder on Silbor’s first career pass attempt. Johnson and Burbage both caught three passes for 22 and 20 yards, respectively.

Stenstrom completed 25-of-34 for 291 yards, with a touchdown and an interception. Both Iosivas and Dylan Classi had seven catches for more than 100 yards.

The Mountain Hawks return home for their next two games, beginning next Saturday when Lehigh hosts Monmouth on Dog Day, presented by JFR Salvage. Game time is set for noon. Tickets can be purchased at LehighTickets.com or by calling 610-7LU-GAME during business hours.

EXTRA POINTS… Princeton won for the third straight time in the series after Lehigh had won five of the previous six games… Lehigh’s defense held his opponent under 100 yards rushing for the second consecutive week… senior Zaythan Hill was Lehigh’s top ground gainer with 47 yards on 10 carries… Lehigh had four sacks, with DeNucci recording three and senior Mikhari Sibblis and junior Trevor Harris combining on the other… first-year Michael Jordan made his first career start at cornerback.