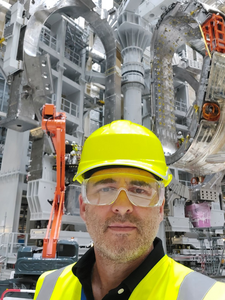 image: Lehigh University mechanical engineering and mechanics professor Eugenio Schuster stands in ITER’s Assembly Hall in this July 2022 photo. In the background, the sub-assembly tool is used to prepare a section of the tokamak vacuum vessel before moving it to its final location within the tokamak pit.
view more

The world’s largest nuclear fusion reactor is currently being built in the south of France. Called ITER— Latin for “the path”—the machine is the product of an international effort to essentially harness the energy-generating power of the sun.

“The goal of ITER is to produce 10 times more energy than is required to operate it,” says Eugenio Schuster, a professor of mechanical engineering and mechanics in Lehigh University’s PC Rossin College of Engineering and Applied Science. “Everyone in the fusion community is directly or indirectly working toward ITER.”

Schuster leads the Lehigh team that recently received nearly $1.75 million in funding from the US Department of Energy (DOE) to continue their work in support of ITER and to help the United States establish its own nuclear fusion reactor within the next decade.

The award is part of a $47 million effort by the DOE announced in October to fund research around the world by US scientists, and ultimately close the gap in science and technology when it comes to nuclear fusion. The awards support the Biden administration’s vision of creating commercial fusion energy.

ITER was formalized in 2006, construction began in 2013, and the facility is expected to be operational by the end of the decade. The long timeline is no surprise. For fusion to occur, two isotopes of hydrogen called deuterium and tritium must be heated to upwards of 100 million degrees Celsius. At that temperature, gas turns to plasma, the fourth state of matter. And stably containing that superheated plasma has been a tough problem to solve.

“We can’t just put it in a vessel because it will melt anything it touches,” says Schuster. “However, plasma is made of ionized atoms, meaning that nuclei and electrons are completely separated, which creates a mix of positive and negative charges. Those charged particles, ions and electrons, react to the presence of a magnetic field. So one of the approaches to containing the plasma has been to use magnetic fields to create what’s essentially an invisible bottle to hold it, and prevent those charged particles from escaping.”

While there are several approaches to magnetic confinement, Schuster says the most promising has been the tokamak, a donut-shaped structure that uses large coils to create the magnetic fields that confine and shape the plasma.

ITER is a tokamak, and for the past 20 years, Schuster has been part of an international team of scientists and engineers working at tokamaks in China, South Korea, and the US that were designed not to produce energy, but to help researchers study the physics of the plasma, and ultimately, to ensure the reality of sustained fusion—and ITER’s success.

Current tokamaks work in what’s called a pulsed regime, but they’re not all created equal, says Schuster. Unlike the newer machines in South Korea and China (called KSTAR and EAST, respectively) those in the US lack the superconducting coils necessary for extended operation.

“So, for example,” he says, “with the DIII-D tokamak in San Diego, which is the largest one we have here in the US, the pulse is around six seconds long. So we run an experiment for six seconds, and then we have to wait for the machine to cool down before we can run another one.”

KSTAR and EAST are known as long-pulse machines, and can run on the order of hundreds of seconds, which makes them ideal for experimentation that could eventually be applied to ITER, which is also designed for long-pulse and eventual steady-state operation . Ultimately, says Schuster, for nuclear fusion to be economically feasible, future nuclear-fusion reactors will have to operate in very long pulses (in comparison to the time between pulses) or in steady state.

“We’ll be exploiting the fact that KSTAR is a long-pulse device that is similar to ITER in terms of both its inner-wall materials and its magnetic configuration,” he says. “And the work that we’ll be doing will help prepare ITER for operation.”

The total requested funding for this particular project is $4,347,000.

The remainder of Lehigh’s portion of the DOE award will support research that Schuster’s group will do in China at EAST. One of the goals of the project, which includes teams from General Atomics, Lawrence Livermore National Laboratory, Massachusetts Institute of Technology, PPPL, and University of California, Los Angeles, is to utilize the readiness and uniqueness of EAST to guide the design of a fusion pilot plant (FPP) here in the US

“A few years ago, the DOE asked the National Academies of Sciences, Engineering, and Medicine to determine what was needed here in the US to really advance nuclear fusion, and in particular, to bring fusion energy to the grid,” says Schuster. “And one of those recommendations was the construction of a fusion pilot plans. And that’s why the DOE is funding American researchers to do this work abroad. It will help us learn from these superconducting tokamak machines so that eventually, we can build a long-pulse reactor-degree device in this country.”

He says this push to design an FPP by the DOE is not only in line with the current administration’s goals to diversify its clean energy portfolio, but also with intense interest from private equity firms in making nuclear fusion a reality. Schuster says the goal is to design, develop, and begin producing energy within 10 years.

“It’s a very aggressive timeline,” he says. Indeed, especially considering that ITER—with its 16-year head start—is still not operational. But Schuster says the difference comes down to investment and technology.

“If you want to make things faster, you need to invest more heavily,” he says. “In the past, investors in nuclear fusion were exclusively governments around the world, which are often constrained by budgets aligned with shorter-term priorities. But now, you have startup companies funded by billionaires, and they aren’t constrained in the same way. The US DOE is presently developing partnerships with private investors to accelerate the development of fusion energy.”

The technological constraints have also changed dramatically. Developments in computational power and advancements in superconducting coils capable of generating ever stronger magnetic fields to contain the plasma have pushed the field forward, faster.

“We now have the capability to better predict the evolution of the plasma, thanks to more powerful computational resources, to understand the physics of the plasma more precisely after decades of studies, and to process the huge amount of data that comes from plasma experiments so that we can better learn from these experimental results,” he says. “So we do believe that we’re in a position to design and build this FPP much faster than we did with ITER.”

It’s an exciting time, he says. The promise of nuclear fusion is a big one: if achieved, it could provide a limitless supply of clean, safe, and reliable energy. And now, with the force of American entrepreneurship behind it, the efforts of Schuster and so many researchers like him, may finally be realized.

“At the end of the day, this fusion pilot plant is what we’ve all been working on, and waiting our whole lives for,” he says. “It’s the opportunity to develop a type of energy that comes with so many benefits in terms of pollution, climate change, and fuel security—right here at home.”

Eugenio Schuster is an expert in nuclear-fusion plasma control and leads the internationally recognized Lehigh University Plasma Control Laboratory. The members of his group have a unique background combining training in fusion and plasma physics, control theory, computational methods, and the collaborative skills needed to work effectively with a large experimental team.

Supported by the US Department of Energy (DOE), some members of his group are stationed at the two largest nuclear-fusion experimental facilities in the United States (the DIII-D National Fusion Facility within General Atomics in San Diego, California, and the National Spherical Torus Experiment Upgrade (NSTX-U) within the Princeton Plasma Physics Laboratory (PPPL) in Princeton, New Jersey). Schuster also conducts research on international superconducting tokamaks like KSTAR (South Korea) and EAST (China). He also collaborates closely with ITER, the world’s largest tokamak currently under construction in France, which will be the first nuclear-fusion device to sustain fusion reactions for long periods of time and to produce net energy.

Schuster has been appointed as an ITER Scientist Fellow in Plasma Control by the ITER Organization. He has been designated by the DOE as an expert member of the Integrated Operation Scenarios (IOS) Topical Group within the International Tokamak Physics Activity (ITPA), which he is currently co-chairing. He recently served as Leader of the Operations and Control Topical Group within the US Burning Plasma Organization (BPO). He is a recipient of the prestigious National Science Foundation (NSF) CAREER award and is the founder and first chair of the Technical Committee on Power Generation within the IEEE Control Systems Society (CSS).

Raphael Warnock’s Georgia win matters to Pa. This is why | Thursday Morning Coffee