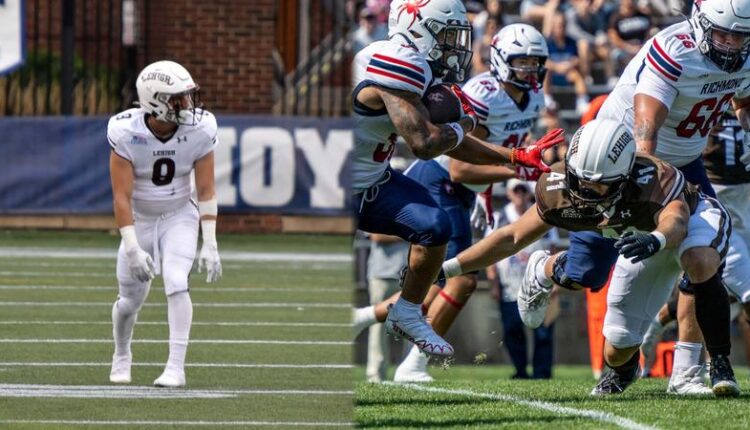 BETHLEHEM, Pa. – Two members of the Lehigh football program were recognized by the Patriot League for their performances against Princeton on Saturday. Junior linebacker Mike DeNucci was named Defensive Player of the Week, while first-year wide receiver Geoffrey Jamiel was named Rookie of the Week.

This is the second career Defensive Player of the Week award for DeNucci, who was also honored following Lehigh’s win at Bucknell last November. Saturday at Princeton, DeNucci made a game-high 11 tackles and registered three of Lehigh’s five sacks. His first sack of the day came on third down in Lehigh territory and forced a Tiger field goal attempt, while his third sack pushed Princeton out of field goal range in the third quarter.

For the season, DeNucci is up to 31 tackles, which ranks second on the team. He has added five tackles for loss and has four of Lehigh’s Patriot League best 11 sacks.

Jamiel started his fourth consecutive game for the Mountain Hawks and led Lehigh with five receptions for 81 yards Saturday at Princeton, establishing career highs in both categories. He was on the receiving end of Lehigh’s longest play of the day, a 48-yard pass from classmate Brayten Silbor on the quarterback’s first career attempt.

So far in 2022, Jamiel has a team-leading 16 catches for 141 yards. He has caught at least three passes in each of Lehigh’s four games.

The Mountain Hawks (1-3) return to Goodman Stadium for their next two games, beginning Saturday when Lehigh hosts Monmouth on Dog Day, presented by JFR Salvage. Game time is set for noon. Tickets can be purchased at LehighTickets.com or by calling 610-7LU-GAME during business hours.