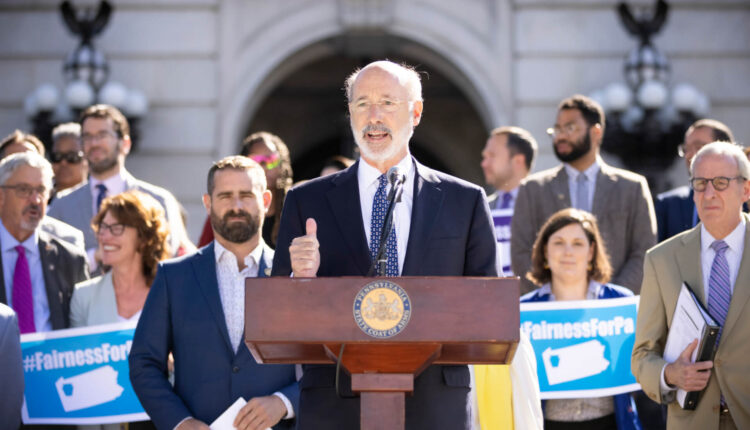 Were Wolf’s budget season trades worth the price of a deal? Democrats may find out in 2022 | Mark O’Keefe

Gov.Tom Wolf speaking with the press. Tuesday, Governor Tom Wolf joined state lawmakers and members of the LGBTQIA+ community to reintroduce the Fairness Act. The Fairness Act is bipartisan legislation that extends non-discrimination provisions in state law to protect against discrimination based on sexual orientation and gender expression or identity. (Commonwealth Media Services photo).

Was Gov. Tom Wolf trying to put a good face on the $40.8 billion state budget recently passed by the General Assembly, calling it a “good budget?”

While Wolf was happy the Legislature passed the budget ahead of the June 30 deadline; it contained none of the significant proposals he made during his budget address last fall.

That included increasing the minimum wage, legalizing marijuana, cutting taxes for low-income workers, increasing financial assistance to full-time students enrolled in the Pennsylvania State System of Higher Education, curbing the influence of lobbyists, and making it easier for Pennsylvanians to vote.

Many Democratic legislators disagreed with Wolf’s stance on the budget, claiming the $5 billion in federal coronavirus relief money could have been used better than socking it away for future use.

Sen. Katie Muth, D-Montgomery, said the public will not be happy “when they find out that this money could have been pushed out in a historic, epic way, to invest in the people of Pennsylvania and it wasn’t.”
Wolf specifically pointed to the increase of $300 million for education, the most ever in the state’s history.

However, that was far short of the $1 billion increase he requested in his budget address.

Wolf also praised the $100 million targeted to the 100 historically underfunded school districts, including some in both urban and rural areas of the state.

However, according to the Associated Press, Wolf was only able to get the funding by backing off an expansion of overtime pay.

Last year, Wolf expanded the ranks of lower-wage salaried workers who must receive time-and-a-half pay for any time they work over 40 hours in a week,

When Wolf won regulatory approval for it last year, he called it “an important victory for thousands of workers” and” absolutely the right thing to do.”

Asked about the exchange by the Associated Press, Wolf’s administration said the provision was just one part of a budget package that provides critical support for underfunded school districts.

The lackluster budget deal was just the latest setback for Wolf, who has seen his popularity drop significantly in the past year.

In May, Wolf suffered a blow at the ballot box as Pennsylvanians approved two referendums, curbing the emergency powers of Wolf and future governors.

GOP lawmakers backed the referenda, claiming Wolf went too far with his emergency powers. Wolf countered that he only did what was necessary to protect the lives of Pennsylvania citizens.

After winning his second term in 2018 with 57 percent of the vote, Wolf lost the referendums by five points, garnering 10 percent fewer votes than he did in 2018.

Then came the June 2021 Franklin & Marshall College Poll results, which found that support for Wolf declined from 52 percent in July of 2020 to 39 percent today.

The number of respondents who said he was doing a poor job jumped from 24 percent to 37 percent.

Meanwhile, support for former President Donald Trump remained about the same over the past two years. The number of respondents who said they feel strongly favorable about Trump dropped only three points (27 percent) from those who felt the same way in October 2020. The poll showed those who are strongly unfavorable toward Trump dropped from 52 percent in October of 2020 to 47 percent this past June

Given the strong support for Trump, Republicans are expected to field candidates next year for the U.S. Senate and governor, who will closely follow his lead.

However, that didn’t work for the GOP in 2018. Both Scott Wagner and Louis Barletta, the Republican candidates for governor and U.S. Senate, respectively, touted their strong support for Trump, but both were soundly defeated. Wolf trounced Scott Wagner 57 percent to 40 percent while U.S. Sen. Bob Casey knocked off Barletta 55 percent to 42 percent.

Republicans could benefit from two long-time trends in Pennsylvania politics. For one, Pennsylvanians have alternated between electing GOP and Democratic candidates since governors were allowed to run for re-election in 1968.

Wolf already made history of his own as he defeated Tom Corbett in 2014, making him the first governor not to be re-elected since 1968.

Of course, Wolf won’t be on the ballot next year because he’s limited to two, four-year terms in office. It will be interesting to see how Democratic candidates for the offices align themselves with Wolf. With the general election more than a year away, perhaps Wolf’s popularity will rebound, and Democrats will be able to take advantage of that.

From the permanent record | Country and regional news

A national park for Pa. and N.J.? Supporters of a new proposal say it’s possible and long overdue