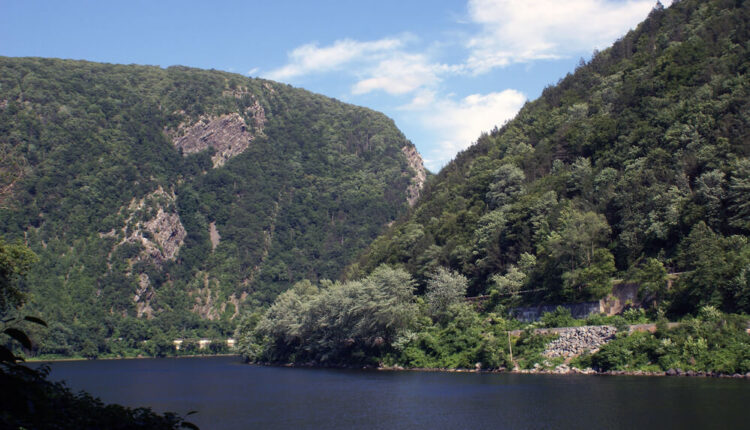 A national park for Pa. and N.J.? Supporters of a new proposal say it’s possible and long overdue

MT Minsi on the left and MT Tammany on the right, with the Delaware River splitting the two, make up the Delaware Water Gap.
(NPS Photo by James Hicks).

Despite the fact that 63 National Parks spread out across the country, Pennsylvania, New Jersey and New York, which combined are home to more than 41 million people, don’t have one within their state boundaries, or within driving distance.

Now, backers of a proposal calling for eastern Pennsylvania’s Delaware Water Gap National Recreation Area to be the region’s first national park, are  trying to change that.

“It’s not fair.” Donald Miles, vice chair of the Sierra Club of Pennsylvania said. “They [residents of New York, New Jersey and Pennsylvania] ought to have a national park that they don’t have to drive 6 or 7 hours to, right?”

John Kashwick, vice chair of the Sierra Club of New Jersey echoed Miles’ comments, it’s a “social equity issue,” Kashwick said, noting that people on the East Coast may not be able to reach national parks out west.

The proposal being suggested by the New Jersey and Pennsylvania chapters of the Sierra Club, a national environmental organization founded by naturalist John Muir in 1892, debuted to members for the first time on Wednesday during  a live webinar.

The club’s local leaders say the proposal would elevate the national designation of the Delaware Water Gap National Recreation Area – a 40-mile stretch of recreation area, spanning from near Pennsylvania’s northeastern border with New York to western New Jersey across from Monroe County –  to full national park status, increasing tourism to the area and with it, a much-needed increase in revenue.

Right now, about 4 million people visit the Delaware Water Gap National Recreation Area every year, Miles told the Capital-Star, That’s about the same number of visitors to such iconic national parks such as Yellowstone and Yosemite.

The problem, Miles said, is that while the recreation area sees nearly the same amount of visitors as some national parks, its status as a recreation area means that it doesn’t receive the same level of funding as parks.

“We need to build things because people are coming,” Miles told the Capital-Star, referring to the budget inequities.

So why the Delaware Water Gap?

“It’s really a unique area in this part of the country,” Miles said, adding that its location on or near the border of three states and within 100 miles of New York City and Philadelphia, make it a prime candidate for national park status.

The Delaware Water Gap, where the Delaware River meanders through the Kittatinny Ridge, was carved out of the nearby quartzite mountains by water, ice, wind and rain between 500 million and 450 million years ago.

While Pennsylvania, New York and New Jersey have myriad national historic sites, national forests and recreation areas, the closest parks — Acadia National Park in Maine, Cuyahoga Valley in Ohio and Shenandoah in Virginia — are several hundred miles away, depending on where you live in the mid-Atlantic region.

Miles noted that New York’s Adirondack State Park and Catskills area were previous contenders, but resistance from locals in the Adirondack area to previous national park proposals led supporters back to the Delaware Water Gap as the most likely candidate.

The Delaware River, which flows through the recreation area, is one of the longest stretches of undammed river in the northeast, and it accounts for 10 percent of Americans’ drinking water.

The area is also the ancestral home of the Delaware Nation, with more than a dozen Lenni Lenape (Delaware) villages recorded in and around the region before the tribes were displaced by British colonists beginning in 1758 with the signing of the Treaty of Easton.

When the Sierra Club of New Jersey first pitched the idea of making the national recreation area a park about a decade ago, club members faced resistance from hunters and sportsmen concerned that they would no longer be able to hunt on the land if it became a park.

But as Miles points out, more than a dozen national parks allow hunting on the lands, many of which have separate park and preserve areas that respectively prohibit and allow hunting.

“We’re just getting started,” Miles said, adding that they “plan to talk to everybody.”

The clubs and its members plan to form a campaigning team later this year to help spread word of the proposal and gather support.

“It’s not going to happen next week,” Miles joked, adding that letters of support need to be gathered from local entities such as businesses, chambers of commerce and municipal and county governments before the idea can be proposed to Pennsylvania and New Jersey’s congressional delegation.

Were Wolf’s budget season trades worth the price of a deal? Democrats may find out in 2022 | Mark O’Keefe