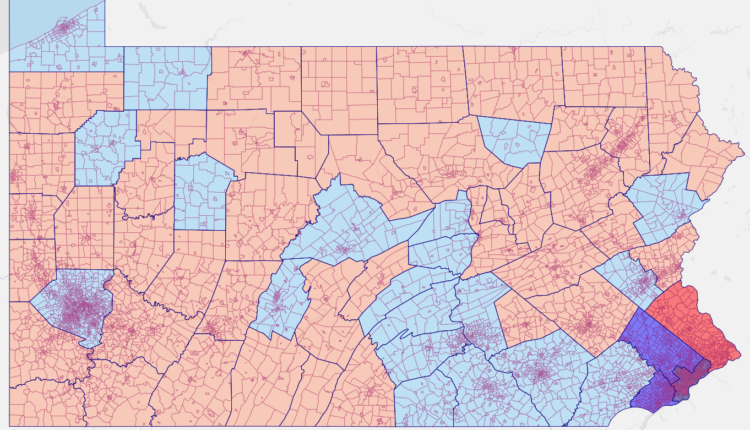 As the first months of the Biden Administration unfolded, and COVID cases steadily declined, PA Dems recovered from their post-election slump.

Back in February, the party held a statewide advantage of 624,315. As of June 14, however, that margin has improved to 630,075. Total registrants are down, so counties are still culling their rolls, although now this is tending to hurt the GOP instead.

To examine what we can discern from these changes, let’s dig into the numbers.

A quick note: I explore our changing voter trends by tracking the gains one party accumulated in registrations over the other party. For example, R+500 means that the Republican Party gained a net 500 more registered voters in that county than the Democratic Party did over this time period, while D+500 indicates the opposite.

Right away we can see what makes this particular update unique. With several rural counties culling their rolls after November, disproportionate Republican losses means unexpected Democratic gains. Normally Centre County, home to Penn State, would be the only spot here where we’d expect to see blue.

This area was one of the few silver linings for Democrats in February, so it’s only appropriate that it serve that role for the GOP now. That minimal gain in Sullivan is the only sign that anything is out of the ordinary.

NEPA is one place Democrats should be disappointed. The long-term exodus of support from Lackawanna and Luzerne counties continues practically unabated, despite the Presidential ascension of Scranton’s native son. Their strength in Monroe County (thanks to the tourist-friendly Pocono Mountains) is a welcome but insufficient substitute.

Once again you can see unusual results in rural counties such as Jefferson, Venango and Warren counties. The most noteworthy development, though, is in Erie. Back in February, the lakeside county had just undergone a post-election purge that saw the Dems lose over 5,000 voters from their margin. While this new gain may be comparatively small, every vote matters in this Trump-Biden county.

This is a tricky region for Democrats, as these numbers contain both ‘fool’s gold’ and legitimate positive trends. Cumberland and Lancaster, for instance, are some of the party’s most promising long-term opportunities. Adams and York, meanwhile, are likely the result of the aforementioned post-election re-shuffling.

The one major outlier that catches the eye is the bright red in Bucks County. Since Bucks County didn’t trim its voting rolls until after my last update, they look out of place on this map. The rest of these numbers, though, are quite encouraging for the Dems, given that Biden’s growth in the collar counties around Philly was pivotal to both his victory in 2020 and his hopes for 2024.

It’s the same story every time. As the Southeast gets more and more Democratic, the Southwest gets even more Republican. I’ve spilled quite a bit of digital ink over the erosion of ancestral Appalachian Democrats, and the trend shows no sign of abating anytime soon. All the while, Allegheny remains a blue island amidst the red sea.

After all, this is a commonwealth full of ancestral Democrats who have either recently left the party or likely soon will. Take the D+630,075 statewide margin I mentioned above, back in October 2016 it was D+913,017.

Every now and then, however, a more substantive trend becomes clear. In retrospect, GOP growth in 2016 was a harbinger of the Trump upset. The Democratic resurgence in 2018 forecast their midterm suburban triumph, and the consistent Republican gains of the summer and fall of 2020 suggested a closer race than the polls indicated.

Thus far, 2021 has been dominated by the post-2020 sifting of the rolls. For now we can’t decipher what the 2022 landscape will look like, but if change is on the horizon, we’re likely to see it in the voter registration numbers first.

Yet, at this moment, I’m tempted to predict that the 2022 cycle will mainly be a continuation of 2020. Although, since such an occurrence would be a historical anomaly, I’ll stick to the numbers for now.