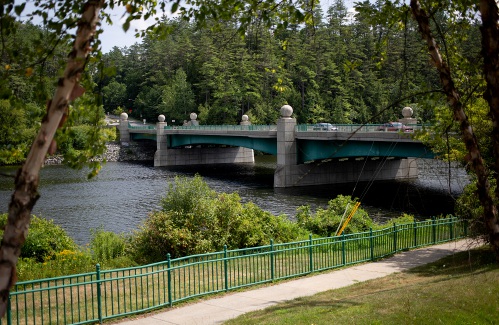 HANOVER — A 24-year old Dartmouth College graduate who returned to Hanover to attend his delayed college graduation ceremony this past weekend died after rescue workers recovered his severely injured body near the Ledyard Bridge early Sunday morning, the Hanover fire and police departments said in a joint news release on Monday.

David Gallagher, a member of the class of 2020 and much admired member of Dartmouth’s lacrosse team who had just attended his class’s postponed graduation ceremony with his family on Saturday, later died from his injuries at Dartmouth Hitchcock Medical Center on Sunday, friends said.

The circumstances that led to Gallagher’s injuries are unclear but Hanover safety officials said they were notified at 1:48 am on Sunday that an individual was “injured on the rocky embankment under Ledyard Bridge” in Hanover.

Once at the scene, a Dartmouth Safety & Security pontoon boat moved Gallagher from the embankment to a waiting ambulance, which transported him for “treatment of his severe injuries” to DH, where he later died, officials said.

Capt. James Martin with Hanover police said that Gallagher was rescued from an embankment on the south side of Ledyard Bridge at the Hanover side of the river but declined to provide further details, citing an ongoing investigation.

But Jack Richardson, a friend of Gallagher’s and captain of the lacrosse team who was with him at the time of the early Sunday morning incident, described it as a “freak accident,” declining to say more because of the investigation.

Richardson said, however, that Gallagher’s injuries were not sustained in relation to the “Ledyard Challenge,” a Dartmouth student tradition in which students strip their clothes and swim across the Connecticut River and then streak back across Ledyard Bridge to the New Hampshire side of the river.

An overseas student who was visiting the Tuck School of Business drowned when he participated in the event in 2005.

Richardson on Monday called Gallagher “just a wonderful teammate and athlete,” who was also a fraternity brother of his in the Theta Delta Chi fraternity. “Totally selfless.”

From the Philadelphia suburb of Downington, Pa., Gallagher was recruited by Dartmouth to play on the Division 1 lacrosse team as a midfielder, said lacrosse coach Brendan Callahan, who previously coached at Lehigh University in Pennsylvania and had been aware of Gallagher as a star player in the region before coming to Dartmouth.

“He was a four-year starter and a high character individual with tremendous attitude, a leader for us who brought everyone else around him up,” recalled Callahan on Monday.

Gallagher had been working as a financial analyst for a real estate investment firm in Los Angeles, where he had just won a “big promotion,” said Callahan, who had been with Gallagher family members at the hospital.

On Monday, Dartmouth sent an email to students, faculty and staff saying that in memory of Gallagher the Dartmouth flag would be flown at half-staff on Monday and Tuesday “who died on Sunday, a day after attending the commencement celebration for the Class of 2020.”