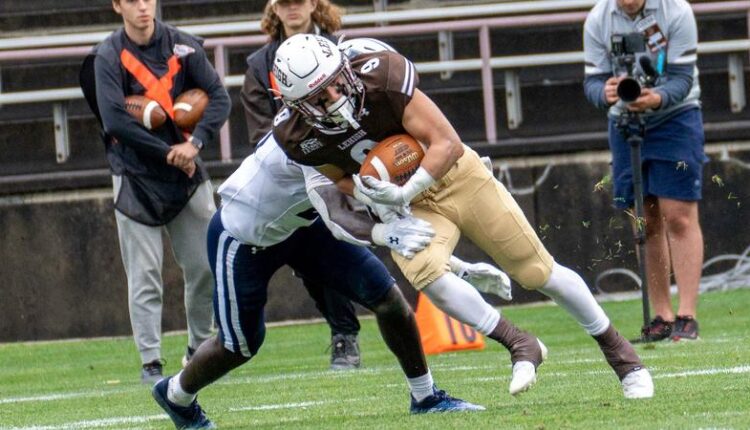 On the opening play of Lehigh’s lone scoring drive in the third quarter, Jamiel had a 42-yard catch-and-run from classmate Brayten Silbor to move the ball into Monmouth territory. The six-play, 57-yard drive was capped by a one-yard run by sophomore Gaige Garcia. All three of Jamiel’s catches came in the third quarter and his 11 targets were the most among Lehigh receivers.

For the season, Jamiel now leads Lehigh with 19 receptions for 223 yards. He has caught at least three passes in each of Lehigh’s first five games.

Junior linebacker Mike DeNucci received honorable mention recognition for his defensive performance. DeNucci recorded 11 tackles for the second straight week and added two more sacks to give him a team-leading six. Lehigh’s defense held Monmouth’s Jaden Shirden, the leading rusher in the FCS, to 54 yards below his season average.

The Mountain Hawks return to Patriot League play this Saturday when they host Fordham on Tackle Cancer Day, presented by Red Robin in partnership with the Leukemia and Lymphoma Society. Game time is set for noon from Goodman Stadium. Tickets can be purchased at LehighTickets.com or by calling 610-7LU-GAME during business hours.