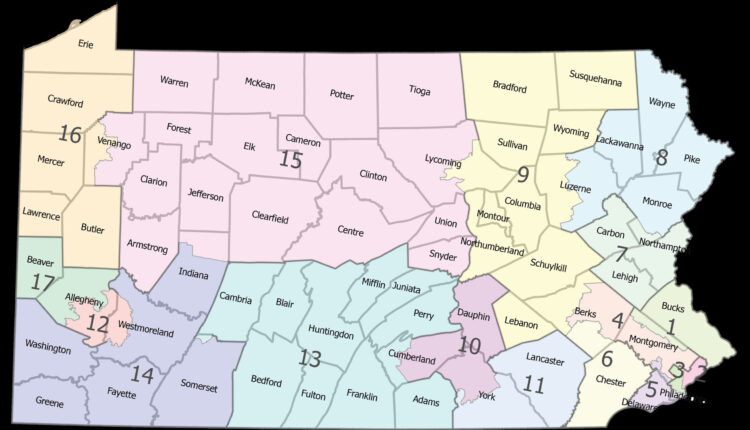 The 2022 election for the 7th Congressional District is much like the 2020 race. The candidates are the same – Democratic incumbent U.S. Rep. Susan Wild and Republican Lisa Scheller.

But the rematch is different. A reconfigured district based on the 2020 census makes the district slightly more favorable to Republicans, according to several political data analytics websites.

The major change is the addition of Carbon County, where Republicans hold a 6,000-voter lead in voter registration, and GOP candidates have won the county in most key races since 2010. Indeed, former President Donald Trump won the county in 2020 and 2016 by 2-1 margins.

The redrawn 7th District sets up a high-stakes race in a midterm election when the party that controls the White House – in this case, Democrats – typically loses seats in the House. Throw in an average approval rating for President Biden at 42.3 percent, according to the political data website FiveThirtyEight, and high inflation, and the odds seem stacked against Democrats retaining a House majority.

Republicans expect to take control of the House, a view shared by political pundits.

In 2020, Wild was elected to a second term with nearly 14,000 votes more than Scheller, a former Lehigh County commissioner. The GOP hopes to flip the script in 2022.

“That’s one of the reasons why some people think that Carbon County could be a key to this election,” said Lee Becker, chairman of the Carbon County Republican Committee.

“Carbon will play a key role in deciding District 7,” she said. “So the swingiest area (Lehigh Valley) in the swingiest state (Pennsylvania) now has Carbon County as a wild card.”

Carbon County, named for the anthracite coal once mined there, sits north of the Lehigh Valley. Tourism is a major part of the economy, along with health care and manufacturing. Population has been steady over the last 10 years, with 65,249 residents in 2010 and 64,749 in 2020. The population is largely white (95 percent) and older (22 percent are at least 65).

Every 10 years, after the U.S. census report is released, states redraw congressional district maps to reflect population changes. Pennsylvania gained population in the last census but still lost a seat because other states – Texas and Florida, for example – grew at a much faster rate, and saw their congressional delegations grow. 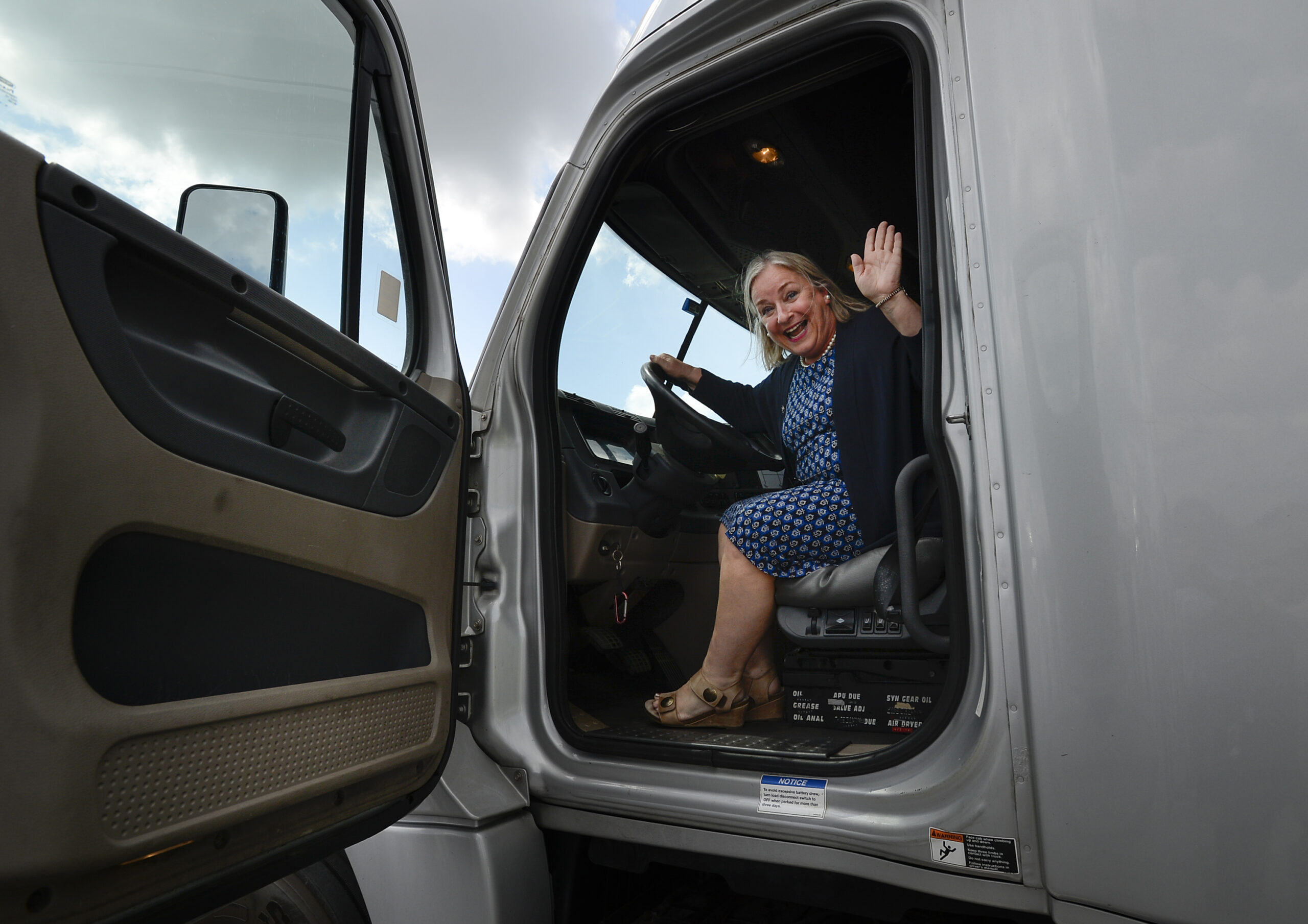 Pennsylvania has 18 congressional districts, but for House elections for this year through 2030, it will have 17. (The state also lost a seat in 2010; indeed, it has lost at least one House district every 10 years, after the 1930 Census, when the Keystone State had 36 members in the House.)

“Carbon will play a key role in deciding District 7. So the swingiest area (Lehigh Valley) in the swingiest state (Pennsylvania) now has Carbon County as a wild card.”

The new district map was drawn by the state Supreme Court, which has a majority of justices who were elected as Democrats.

Carbon was moved from the 11th District in northeastern Pennsylvania to the Lehigh Valley-based 7th, where Lehigh and Northampton counties form the majority of the district; the new 7th District also reduced the number of municipalities in Monroe County from eight to two and part of a third.

“Now we’re paired with the Lehigh Valley, which honestly makes more sense,” said Henninger. “I have to say I’m happy with this redistricting as it reflects a lot of existing relationships.”

In 2020, the 7th District was considered even, but now leans slightly Republican, despite the fact that Democrats hold a voter registration advantage districtwide, according to several organizations that analyze political data.

FiveThirtyEight moved the 7th District from even in 2020 to leaning slightly Republican (+4 advantage) for 2022, although it considers the district highly competitive. In its most recent computer simulation of 40,000 election outcomes, FiveThirtyEight rated the race as a toss-up, with Scheller winning 52 percent of the time. Republican congressional candidate Lisa Scheller, who was leading the 7th District primary, talks to a voter outside of the polling place at Tracy Elementary School in Palmer Township on Tuesday, 5/17/22 (Photos by Donna Fisher for Armchair Lehigh Valley).

The Cook Political Report rated the District Republican +2, meaning that, in the 2016 and 2020 presidential elections, the district as now configured would have performed an average of two points more Republican than the nation.

Sabato’s Crystal Ball from the University of Virginia’s Center for Politics also rated the contest between Wild and Scheller as a toss-up. It said the new 7th District made the seat more Republican, and declared that Wild is the most vulnerable of the three other eastern Pennsylvania women who were also elected to Congress in 2018.

It said the new district “traded out blue parts of Monroe County (namely around Stroudsburg) for Carbon County, one of the state’s erstwhile swingy counties that is solid red today.”

Starting in 1998, the first year in which voter registration data is available on the state website, Democratic voters outnumbered Republicans, often by several thousand, reaching a peak margin of 5,421 in November 2009.

But beginning in 2010, Democrats saw their voter-registration edge gradually erode until November 2018, when Republicans moved into the majority by 600 voters (18,608-18,008). The Republican numbers increased significantly each year since.

“I could literally give you a list,” Henninger said in an email. “That includes everything from the loss of good-paying union jobs to conservative media’s stranglehold on broadcast news, to the Democratic Party forgetting that rural areas exist – and so do liberal gun owners. And we can’t base the entire party off of what works in [New York City] or [Los Angeles].”

For Becker, the answer is simpler: the end of the McCall era.

For nearly 35 years, a Democrat named McCall represented the county in the state House. Thomas McCall won the seat in 1974 and died in 1981 at age 46 during his fourth term. His son, Keith, succeeded him, winning election in 1982; he served for 13 terms – rising to key leadership positions as majority whip and then House speaker, respectively, in his final two terms, before declining to seek reelection to a 14th term in 2010.

“They ran the county for years,” Becker said in an interview. “And it was when [current Republican state Rep.] Doyle Heffley came out and started campaigning … [in 2010] that we started turning things around. And we convinced people that the only way to turn things around was to get out there and register Republican voters.” Heffley has represented the county’s 122nd District ever since.

Then there was the Donald Trump factor, Becker said. The energy surrounding Trump’s presidential campaign in 2016 also boosted the county’s GOP voter registration.

“By the droves, the people, the Democrats, came into our headquarters or to our (Carbon County) fair stand. We flipped over so many Democratic voters. … They said, ‘We’re sick of this stuff that’s going on. It’s time for a change,’ “ said Becker, who’s been active in local GOP politics for 50 years and county chairman for about 10.

Republican federal candidates dominated Carbon results since 2010, gaining the most votes, often easily, in each presidential and U.S. Senate and House contest.

But Democrats have won the county vote in a few contests. Democrat Tom Wolf won the county in his successful gubernatorial election in 2014 but lost the county by a large margin in 2018, although he was reelected. And Democrat Barack Obama had more votes than Republican nominee John McCain in 2008, when he was elected to a first term as president but, in winning reelection, lost the county in 2012 to Mitt Romney.

Wild, in an online meeting in July, discussed Carbon County voters. Critics focused on one word she used — “school.”

“Carbon County has many attributes, but it is a county that – although it was once an Obama county – it since has become a Trump county,” she said in a video discussion as reported by the Delaware Valley Journal. “I’m not quite sure what was in their heads because the people of Carbon County are exactly the kind of people who should not be voting for a Donald Trump, but I guess I might have to school them on that a little bit.”

The Scheller campaign saw an opening to exploit Wild’s statement.

“Carbon County voters didn’t appreciate Wild’s comment about needing to ‘school’ them,” Scheller campaign manager Pierce Frauenheim said in an email response to a series of questions, “and we’ve been sure to remind folks about it every chance we get because it perfectly demonstrates the kind of out-of-touch elitism that Rep. Wild embodies.”

“I don’t expect it will work against her [Wild]. Anyone who was on that call knows she was referring to how damaging the GOP policies tend to be for poor, rural areas like ours.”

“While Lisa Scheller, as CEO of Silberline, cut her American workforce by 60%, outsourced hundreds of jobs to other countries, and closed down a factory right here in Carbon County, Susan Wild built relationships with the business community and passed laws to bring good-paying manufacturing jobs to the district.”

Scheller runs the family’s international business, Silberline Manufacturing Co., which is headquartered in Schuylkill County, where she grew up. The company manufactures aluminum pigments for paint.

Silberline closed its Carbon County plant in Lansford in 2016 to consolidate operations at its facility in nearby Hometown, Schuylkill County, the Lehighton Times News reported. In 2019, the company closed a plant in Decatur, Indiana, affecting 50 workers. Silberline employs about 700 people worldwide, of which about 160 are in the U.S

“Jobs and the economy are a top priority for people in Carbon, and voters know that Lisa’s experience as a manufacturer and job creator can be a major asset to the community when she gets to Washington,” Frauenheim said. “Working class people and those on fixed incomes are also bearing the brunt of high inflation, and Lisa has put addressing inflation as a top priority.”

Frauenheim pointed to Scheller’s fight to overcome a heroin addiction at age 22 that helps her connect to voters.

“Lisa’s past struggles with addiction have also given her a shared experience with many folks in Carbon County, and by talking about her story she has been able to provide an example of what’s possible and offer the chance to have a representative in Congress who understands the addiction crisis in a very personal way,” he said.

“Susan Wild is out of touch with residents of this district. She is a career lawyer turned politician who is anti-American energy, pro-open borders, soft on crime and is a rubber stamp for the Pelosi-Biden agenda that is fueling inflation and burdening the economy.”

“Carbon County is critical to our campaign; every vote everywhere matters. In her official capacity, Susan works for everyone in the district, regardless of their party registration, and the same is true in her campaign. Susan’s campaign and record in Congress is about investing in good jobs, lowering prices, making health care more affordable, and ensuring kids get a good education. Those are things we can all agree on,” she said.

“We’re talking about things that affect people’s everyday lives – lowering costs, bringing good paying jobs to the district, making health care more affordable, protecting our rights – not stoking partisan divides. Susan is one of the most bipartisan members of Congress, she successfully fought to get Medicare the power to negotiate lower drug prices and wrote laws to boost American manufacturing.”

“This is one year where motivating our base and then some does not appear to be an issue,” Carbon Democratic leader Henninger said, noting that the Supreme Court’s recent Dobbs decision overturning a constitutional right to abortion has energized voters.

“Everything I’m seeing makes this too close to call. …This is the one race in our area that is going to be a nail-biter.”

Robert H. Orenstein is a reporter for the political newsletter Armchair Lehigh Valley, a publishing partner of the , where this story first appeared.