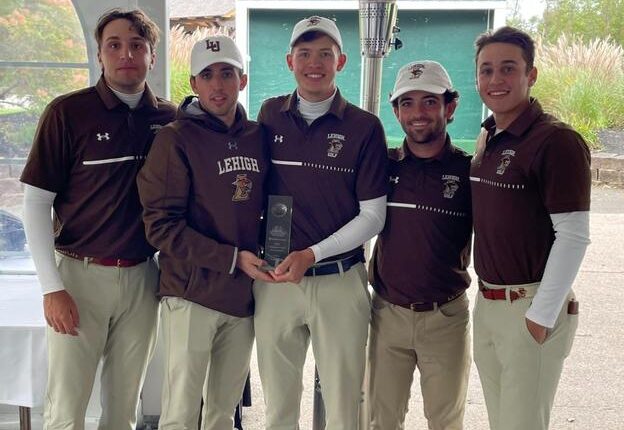 APALACHIN, NY – Behind a total team effort, the Lehigh men’s golf team claimed the team title at Binghamton’s Matthews Auto Intercollegiate, which wrapped up Monday on the Links at Hiawatha Landing. All six Lehigh entrants finished in the top 16 as the Mountain Hawks won their first team title since winning the spring 2021 ABARTA Collegiate Invitational.

Lehigh shot three under par 285 as a team to finish the 36-hole tournament at one under par 575 (290-285). The Mountain Hawks defeated second place La Salle by six strokes.

The top Lehigh finisher was senior Daniel Song, who was competing as an individual and finished second overall at four under par 140 (69-71). Song made four birdies Monday and appeared headed for medalist honors, but La Salle’s Karsen Rush shot a blistering 66 and made an eagle on the 18th hole to finish at 139 and earn the one stroke victory.

Senior David Hurly led Lehigh on Monday with a round of four under par 68 to move into a tie for third place at 142 (74-68). Hurly made five birdies in his final round.

Junior Edmund Broderick made three birdies on the back nine and four overall to shoot 74 Monday and finish in a tie for eighth place at 145 (71-74).

Sophomore Aidan Oehrle and first-year Jake Roth tied for 12th place at 146. Oehrle made five birdies in a final round 71, while Roth shot 76 Monday with four birdies.

This is the second time Lehigh finished with the low score at the Matthews Auto Intercollegiate. The Mountain Hawks tied with St Bonaventure in 2017 but lost the team title on a tiebreaker.

The Mountain Hawks will play Lafayette in the annual Presidents Cup matches Oct. 18 at Hamilton Farm Golf Club in Gladstone, NJ Lehigh will then host its annual invitational Oct. 21-22 on the Grace Course at Saucon Valley Country Club.