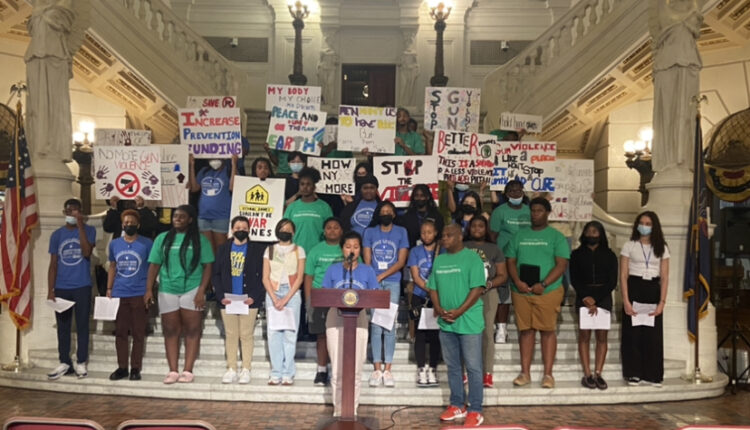 Proms, not funerals. Essays, not eulogies. Books, not obituaries. Kids, not guns.

Those were just one of the messages on a dozen of hand-drawn signs as a group of more than 30 Philadelphia kids and teens gathered in the Capitol on Monday afternoon, urging Pennsylvania lawmakers to take action against gun violence across the state.

When Emily Seda, a 17-year-old who lives in north Philadelphia, hears a “bang,” she automatically assumes it’s a gunshot.

On Sept. 15, 2021, shots were fired outside Seda’s school. What started as an altercation between two students escalated when one of the kids “pulled out a gun,” Seda said.

“It was complete chaos,” Seda said, describing the scene of kids fleeing and the subsequent school lockdown. “After that day, everyone lived in constant fear that it would happen again. The place where I felt safe no longer felt safe. Everywhere you go, you have to be on guard. You have to teach your kids what to do in these situations. You have to live with the fear that maybe one day, you or your family won’t come home.”

Seda was just one of more than 10 kids to share their experiences with gun violence, all of whom called for legislative action.

The United States has seen an increase in gun violence nationwide. In Pennsylvania, roughly 1,600 people die from gun violence, and 3,000 more are injured each year, according to CeaseFirePA, a firearms safety advocacy group.

But on Monday, the youth activists — representing Pennsylvania Youth Vote, Frontline Dads, and Community Rising — urged lawmakers to do more, including allocating additional funding to combat gun violence through community programs and passing legislation to tighten the firearm licensing process.

The press conference comes roughly one month after the Fourth of July, when a gunman opened fire during a parade in Highland Park, Ill., killing seven and wounding more than a dozen people. That same weekend, crowds in Philadelphia fled during a fireworks display after two officers were shot on the Benjamin Franklin Parkway. Those were just two in a series of gun-related incidents over the holiday.

Legislative Democrats have called for stricter firearms restrictions, including universal background checks, red flag laws, and mandatory lost and stolen gun reporting guidelines. However, Republicans, who hold the majority in Harrisburg, have effectively voted down the proposals or have not called their legislation up for a committee vote.

In June, House Republicans gutted a gun control bill and inserted language to allow people without permits to carry concealed weapons. Legislative Republicans have instead focused on Philadelphia District Attorney Larry Krasner when it comes to gun violence in Philadelphia, launching an effort to impeach him, introducing legislation to limit him to two terms in office, and forming a committee to investigate the causes of rising crime during Krasner’s tenure.