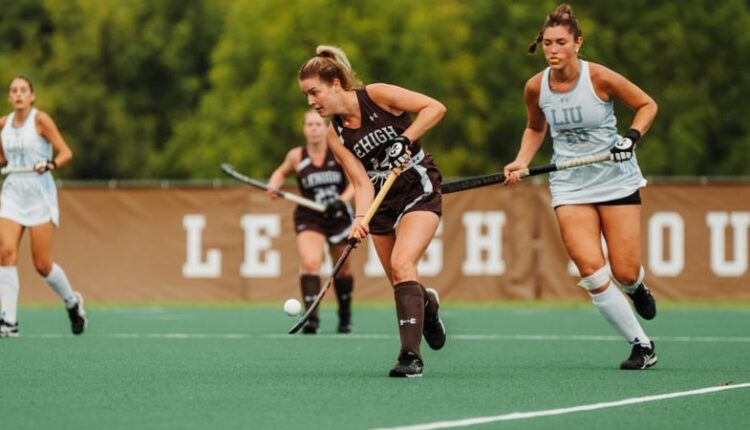 BETHLEHEM, Pa. – Sophomore Guusje Hogendoorn scored the game-winning goal in the final seconds of overtime to give Lehigh a 2-1 win over Villanova Monday evening at Ulrich Field. The win gave the Mountain Hawks their fifth straight victory, the program’s longest winning streak since 1986, and their first win over Villanova since 1988.

Lehigh improves to 7-5 on the year while the Wildcats are now 7-4 this season.

“We talked pregame about continuing to make a statement and showing improvement and proving that we can be a consistent winning program against strong teams,” stated Lehigh head coach Caitlin Dallmeyer. “We knew we played well against Lafayette and we knew Villanova would be a tough opponent. They have a really strong RPI right now and we thought it could be a great statement game.”

After a scoreless first quarter, Lehigh would have a scoring opportunity in the circle which led to a penalty stroke. Senior Sarah Bonthuis beat the Wildcats keeper for her eighth goal of the season and gave the Mountain Hawks a 1-0 advantage.

After the intermission and a scoreless third quarter, junior Meghan Mitchell struck the back of the cage to tie the contest at 1-1 just two minutes into the fourth quarter. Even though both squads had opportunities down the stretch, the game would head to overtime locked up at 1-1.

“We came out and played really well,” continued Dallmeyer. “Maddie Kahn had a game for us. Sarah did a really good job with Julia (Gatelein) controlling the ball through the midfield and the combo of Julia, Kiki (Mes) and Sarah, when it’s on, is certainly an attacking force to be recognized with.”

The Mountain Hawks held Villanova without a shot in the 10-minute overtime period with Lehigh getting three shots on goal. Fortunately, Hogendoorn stole the ball and dribbled up the field and scored the game-winner with 8.7 seconds remaining for the first goal of her collegiate career.

Guusje Hogendoorn’s first goal of the season was the OT winner 👇 pic.twitter.com/Au1ytOf8RG

“We said going into overtime that it would be unfortunate to out-play, out-shoot and out-corner that team and lose so we needed to finish it quickly. We didn’t finish it quickly but that gave us the opportunity to get ‘Goose’ into the game and for her to finish it off for us.”

Defensively, Lehigh was able to hold Villanova to nine shots, with senior goalkeeper Maddie Kahn making six saves and junior Lotte Smorenburg recording a defensive save in the first quarter.

“We didn’t score in the ways that I was hoping, with the amount of shots that we took,” added Dallmeyer. We’ll continue to work on shooting with intent and finishing. We left a few balls on the line there unfinished, but it’s great for us to have some things to work on going into next weekend.”

High 🖐s all around following an OT win! pic.twitter.com/O8Bje2SMJg

“It was really impressive. Shooting from the top of the circle is something we struggled with and that we work on. We are always looking for the perfect shot and sometimes we never take it. ‘Goose’ ripped one as soon as she had the opportunity,” concluded Dallmeyer.

Lehigh returns to Ulrich Field on Saturday morning to host Bucknell in a Patriot League contest beginning at 11 am and will be broadcast live on ESPN+.

It’s Yom Kippur. What is the holiday? How is it observed? | Opinion

America is at a turning point this midterm campaign season. The choice is critical | Opinion