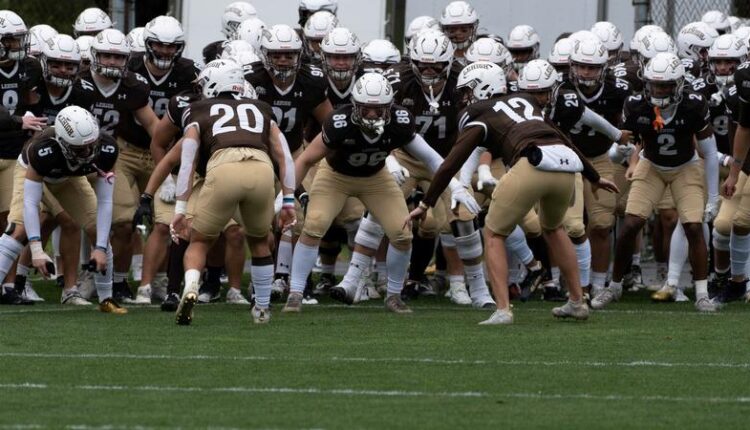 BETHLEHEM, Pa. – It’s back to Patriot League play for Lehigh as the Mountain Hawks host Fordham on Tackle Cancer Day, presented by Red Robin in partnership with the Leukemia and Lymphoma Society. Both teams are 1-0 in the Patriot League with wins over Georgetown. Lehigh is looking to get back on the winning track after dropping three straight following its Sept. 11 win over the Hoyas. Last week, the Mountain Hawks fell behind 21-0 at halftime and never recovered in a 35-7 loss to Monmouth. Sophomore running back Gaige Garcia scored Lehigh’s lone touchdown, while the defense created a pair of fourth quarter turnovers and held Monmouth’s Jaden Shirden, the leading rusher in the FCS, to 54 yards below his season average.

After dropping its last three games, Lehigh looks forward to playing five of its final six games against Patriot League opponents. Even though last year’s trip to Fordham resulted in a loss, the Mountain Hawks’ performance sparked a run of five solid performances to close out the 2021 campaign, including three straight wins to end the season. Lehigh entered last year’s Fordham game still looking for its first touchdown. The Mountain Hawks scored four that day and over their final five games averaged 23.6 points and 341.8 yards of offense. Lehigh rushed for nearly 114 yards per game and allowed just over 71 yards per game on the ground over those final five games.

Senior running back Zaythan Hill has enjoyed two of the best games of his career in his two previous games against Fordham. Last year, Hill established career highs for rushes (27), yardage (159) and touchdowns (three) in Lehigh’s 35-28 loss in the Bronx. As a first-year in 2019, Hill rushed 11 times for 124 yards, and tied a Patriot League record with a 94-yard touchdown run. Hill has 12 career touchdowns, including a 77-yard reception against Richmond, Hill’s career score against a non-league opponent. Between the 77-yard touchdown against Richmond and a 60-yard rush at Georgetown, Hill owns Lehigh’s two longest plays from scrimmage this season.

First-year wide receiver Geoffrey Jamiel has picked up back-to-back Patriot League Rookie of the Week awards for his performances against Princeton and Monmouth. Jamiel led the Mountain Hawks with five receptions for 81 yards at Princeton. He connected with classmate Brayten Silbor for Lehigh’s longest play of the day, a 48-yard completion on the quarterback’s first career pass attempt. Jamiel added three more grabs for 82 yards against Monmouth. He has caught at least three passes in each game so far and leads the Mountain Hawks with 19 receptions and 223 receiving yards.

Lehigh’s game at Fordham last October featured the rare trifecta of a 300-yard passer (Dante Perri), 100-yard rusher (Zaythan Hill) and two 100-yard receivers (Eric Johnson and Roemello Miner). It marked the first time the Mountain Hawks hit all three of those benchmarks since Sept. 30, 2017 at Wagner. On that evening Brad Mayes threw for 306, Dom Bragalone rushed for 102 and Troy Pelletier (143) and Jorge Portorreal (132) eclipsed the century mark for receiving yards. On that night, five turnovers doomed Lehigh in a 37-20 Wagner victory.

Armed with the top-ranked offense in the FCS, Fordham brings a 4-1 record into Goodman Stadium. The Rams opened Patriot League play with a 59-38 win over Georgetown last weekend. Fordham scored 31 unanswered points to erase a 21-7 deficit. The Rams have scored no fewer than 48 points in any of their five games. Fordham leads the FCS in scoring offense (51.8 ppg.), total offense (624.2 ypg.) and passing offense (430.6 ypg.) and the Rams also boast the Patriot League’s top rushing attack (193.6). Quarterback Tim DeMorat is the leading passer in the FCS with 2,153 yards and 26 touchdown passes. Fotis Kokosioulis is the top receiver in the FCS with 49 catches for 728 yards and eight touchdowns. DeMorat (four) and Kokosioulis (one) have combined to win all five Patriot League Offensive Player of the Week awards this season. Linebackers Ryan Greenhagen (53 tackles) and James Conway (46 tackles) pace the Fordham defense.

Lehigh has played Fordham 33 previous times with the Mountain Hawks winning 25 of those meetings. Fordham has won six of the last eight meetings after winning just two of the first 25 games in the series. These two teams met for the first time in 1923 then did not meet again until 1989. Tom Gilmore is 6-9 versus Fordham as a head coach, winning with Lehigh in 2019 and going 5-8 during his time at Holy Cross.

The Mountain Hawks will hit the road for their final non-league game of the season when they travel to Cornell on Oct. 15. It will be the first meeting between the Mountain Hawks and Big Red since the 2014 season. Game time is set for 1 pm from Schoellkopf Field. Lehigh will return to Goodman Stadium to host Bucknell on Oct. 22