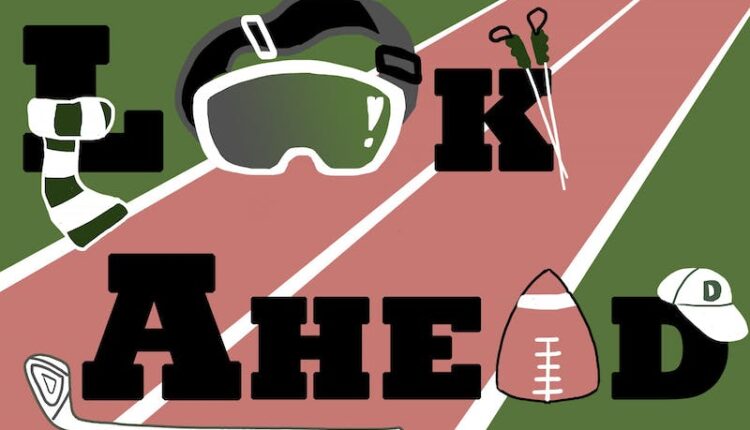 Women’s tennis will host the ITA Regionals in Hanover from Friday to Sunday. Dartmouth spent last weekend in Newport, Rhode Island at the International Tennis Hall of Fame Women’s Collegiate Invitational. At the invitational, Big Green doubles partners Brooke Hess ’26 and Ujvala Jupalli ’25 fell to Boston College in the semifinals.

Following a second place finish at the Battle in Beantown race in Boston, men’s cross country will travel to Bethlehem, Penn. for the Paul Short Invitational on Friday. The men’s team scored 98 points at the Battle in Beantown race, while two weekends prior they secured a win with 29 points at the Maribel Sanchez Souther Invitational. Will Daley ’24 and Albert Velikonja ’25 have been leading the Big Green’s strong start to the 2022 fall season.

Football (1-1) will begin Ivy League play against the University of Pennsylvania (2-0) this Friday at 7 pm Last Saturday, despite jumping out to an 18-point lead in the first quarter — powered by quarterback Nick Howard ’23 , who rushed for a career-high 186 yards — the team lost in overtime last weekend to Sacred Heart in Fairfield, Connecticut. The reigning Ivy League champions look to secure their first league win — and second win this season — at home.

After a strong 9-2 start to the season — including Dartmouth’s first Ivy League win of the season against Harvard University (1-8) last weekend — women’s volleyball hosts Princeton University (9-2) on Friday and the University of Pennsylvania (1 -10) on Sunday. So far this season, the Big Green are undefeated at home and are looking to continue this streak this weekend.

Men’s golf heads to Lake Placid, New York for the Autumn Invite hosted by Columbia University this Saturday and Sunday. Last weekend at the Dartmouth Invitational, Dartmouth’s teams secured a third and fourth place finish out of a field of nine teams, with the “B” team scoring the highest for the program since 2015. Leading the “A” team effort was Eli Kimche ‘ 25, after he ended the weekend with his best performance to date of 70-71-141 (-3), just one stroke behind the first-place finisher.

Women’s sailing is back in action this weekend, taking part in four competitions this Saturday and Sunday and marking the team’s fourth consecutive weekend of competition this fall. The sailing team will disperse throughout New England to compete in the Women’s Atlantic Coast Championship Round 1 at Boston College, the Danmark Trophy at Coast Guard Academy, the Smith Trophy at MIT and the Moody trophy at the University of Rhode Island. The Big Green is coming off a fourth-place finish at the annual Hurst Bowl last weekend.

Equestrian looks to secure its first win of the season as members travel to Tennessee this Saturday to compete against the University of Tennessee at Martin. Last weekend in their meet against reigning national champion University of Lynchburg, Alexa Strauss ’26 had a strong showing in her first ever collegiate competition, earning a point in her first time opening the ring. After losing 1-7 to the top-ranked team in the country last weekend, the Big Green is currently ranked fourth in the nation according to NCEA Rankings.

This weekend, field hockey (3-5) plays back-to-back games. First, the Big Green will compete in his second Ivy League game this season against Brown University (6-2) on Saturday at 11:00 am on Chase Field. On Sunday, the team travels to Durham, New Hampshire for a tilt against the University of New Hampshire (3-6). The Big Green are 3-1 at home and look to continue to improve their record this weekend.

Following a two-game win streak against Sacred Heart and Quinnipiac the past two weekends, women’s rugby (2-0) faces off against Army West Point (3-0) this Saturday at 1 pm on its home turf. Dartmouth has won both of its games so far by at least 26 points. The Big Green will face its stiffest test of the season so far, as this weekend’s matchup on Brophy Field is a rematch of last year’s NIRA championship — in which Dartmouth came out on top.

This weekend, women’s soccer (5-3-1) travels to New Jersey to compete against Princeton University (6-4) in its second Ivy League matchup of the season. While on the road this season, the Big Green has secured wins against Sacred Heart University and the University of Vermont. The team looks to add one more away win — and its first Ivy League win of the season — in its game this weekend.

Following a 2-2-2 record so far this season, men’s soccer looks to make a splash in its first Ivy League competition of the year. Dartmouth hosts Princeton at Burnham Field at 4:30 pm this Saturday. In its last game against Stonehill College last Saturday, the offense made a huge impact, scoring six goals throughout the game. The team looks to carry this momentum into its first Ivy League game of the season.

The Republican advantage: It’s easier to be against things than for them | Opinion