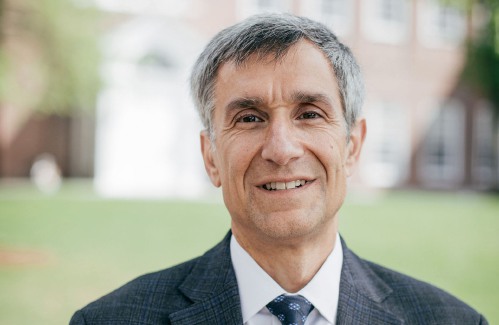 HANOVER — After serving in top jobs at Dartmouth College for more than 15 years, Provost Joseph Helble will be leaving Hanover to serve as the president of Lehigh University, officials said Monday.

It will be a homecoming of sorts for Helble, who graduated from Lehigh in 1982 with a bachelor’s degree in chemical engineering.

The private research university in Bethlehem, Penn., has more than 7,000 students in its undergraduate and graduate programs.

“Although it was hard for me to imagine leaving Dartmouth, the opportunity to return to my alma mater in a leadership position and help shape that institution’s future was extraordinarily appealing and not an opportunity that many people have,” Helble said in an interview on Monday .

As provost since 2018, Helble serves as Dartmouth’s chief academic and budget officer, and has remained a professor at the Thayer School of Engineering, where he served as dean for 13 years.

Helble has also played a crucial role in Dartmouth’s response to the COVID-19 pandemic.

Every two weeks Helble co-hosted “Community Conversations,” a webcast in which he updated viewers on virus statistics, answered questions, and interviewed experts on topics like vaccine efficacy and student social-distancing.

“In my time as provost, even though it’s not a moment that any of us were hoping for, we were able to weather the pandemic in a way that’s been among the best in the country in terms of keeping our students, faculty and staff, and the broader community, safe and healthy. I’m really proud of that,” said Helble.

“Perhaps I’m most grateful to Joe for the calm, steady leadership he’s shown as provost in helping us manage through the pandemic this year — surely one of the most turbulent times in Dartmouth’s history,” Dartmouth President Phil Hanlon said in an email to the Dartmouth student body on Monday.

In his time as dean, Helble, who also holds a PhD from the Massachusetts Institute of Technology, oversaw a notable increase in interest in engineering and computer science. Thayer witnessed a record increase in the school’s research funding and enrollment almost doubled. In 2016, Dartmouth was the first major research institution to award more engineering degrees to women than to men. “I’m very proud of that diversification of the student body,” said Helble.

Helble also was a proponent of Dartmouth’s West End expansion in Hanover, including the ongoing construction of a $155 million building for the Thayer School and Dartmouth’s computer science department.

Lehigh Board of Trustees Chair Kevin Clayton said that Helble’s leadership at Dartmouth made him the top pick among a pool of accomplished candidates.

“We are tremendously impressed by the personal and professional qualities that made him so successful at Dartmouth, and are confident those same qualities will make him an outstanding president at Lehigh,” Clayton said..

As he leaves Dartmouth, Helble is excited by the expansion of engineering, computer science and entrepreneurship at the college, as well as the investment and continued growth of the arts.

He is hopeful that the College will continue to emphasize the liberal arts as essential to the development of all students.

“I’m a lifelong fan of Dartmouth,” said Helble, who recently turned 61 and continues to run marathons. “So I’ll be watching.”

Helble will start at Lehigh on Aug. 16, replacing John Simon, who is retiring as president in June.

Hanlon plans to appoint an interim provost while a search committee looks for Helble’s replacement.

Frances Mize can be reached at [email protected]

Yes, there were Election Day problems in Luzerne Co. No, that’s not a sign of fraud | Opinion