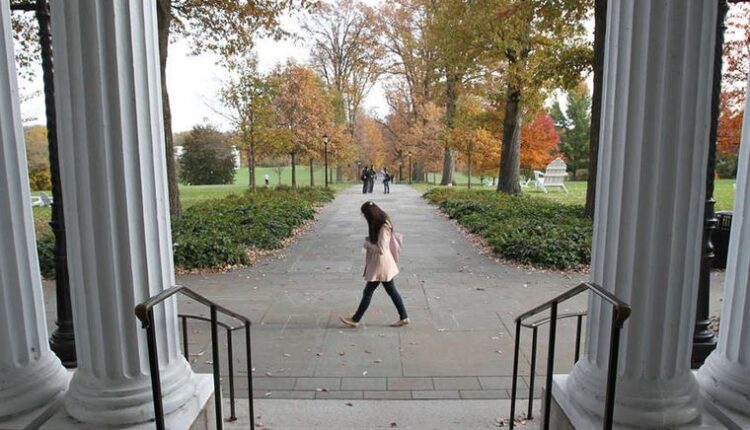 Swarthmore College will stick to its plan to partner with an organization that will host retired military personnel as visiting professors on campus, although some faculties and students have been pushed back, the president announced on Friday.

Last year’s decision to partner with the Chamberlain Project sharply divided the Delaware County School. Supporters said it would broaden views and enable discussion and debate about a large, influential institution in America, the kind of debate that should be held on a liberal arts campus.

Opponents, including several student groups, said it was unfair to create a special path for military officers to work as visiting professors. At a faculty meeting last month, 83 out of 150 attendees passed a resolution calling on President Valerie Smith to withdraw from the partnership. Swarthmore has 251 faculty and faculty with voting rights.

In her message to campus on Friday, Smith defended the integrity of the partnership.

“Ultimately, I drew from the college’s mission and my fundamental belief that our ability to engage in exchanges of diverse and often conflicting views is critical to the liberal arts, not to rule them out,” she wrote. “I was specifically thinking of one of the college learning objectives created by our faculty, where we commit to: ‘Students will explore different cultures, ideas, institutions and means of expression in order to enable them to critically examine their own perspective. ‘ ”

She also said that college participation should not be tied to blanket approval of any defense policy or military action to implement it.

The project, launched in 2016, is named after Joshua Lawrence Chamberlain, a professor at Bowdoin College who was also a Union officer in the Civil War. The aim of the organization is to bridge the “civil-military gap” and to train future leaders from the fields of civil society, culture and economy through the armed forces. The scholarship holders teach two classes, supervise students and take part in school activities. The project is funded by the Jennifer and Jonathan Allan Soros Foundation. Jonathan Soros is the son of progressive billionaire George Soros.

Other participating colleges are Amherst, Barnard, Bowdoin, Hamilton, Oberlin, Vassar and Wellesley as well as Lehigh University in Bethlehem. Anyone can accept or reject a scholarship holder recommended by the project. If accepted, the project pays 50% of the cost and the college pays the rest.

Those who opposed the partnership were discouraged by Smith’s decision. A faculty member contacted by The Inquirer said she was “too sad” to even talk about it.

Another, Lee Smithey, professor of peace and conflict studies and sociology, said he and others were disappointed “especially since the president’s decision raises questions about faculty leadership and the history, mission and values ​​of the college.” But he added: “I am grateful for the extensive commitment of students, alumni and lecturers on this topic.”