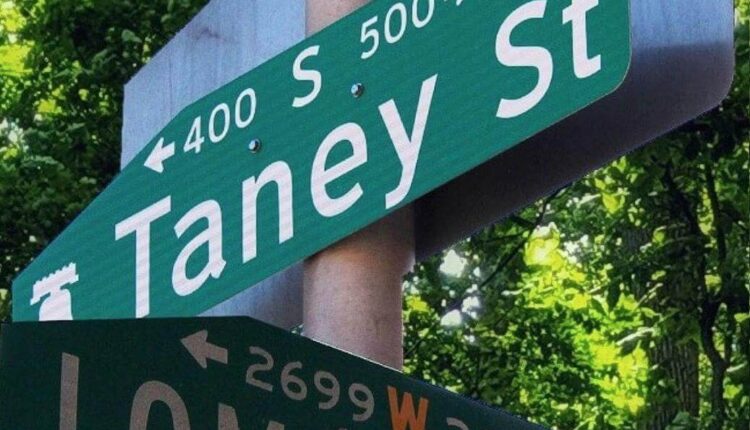 WASHINGTON — Pennsylvania’s Republican congressional delegation split Tuesday on a vote  to remove from the Capitol a bust of the late Supreme Court Chief Justice Roger Taney, a Marylander who wrote the despised Dred Scott decision—as well as evict statues and busts of men who fought for the Confederacy or served in its government.

The legislation passed on a vote of 285-120, with all the nay votes from Republicans and 67 of them voting with Democrats. It would replace the marble bust of Taney, which is displayed outside the old Supreme Court chamber on the first floor of the Capitol, with one of the late Thurgood Marshall, a fellow Marylander who was the first Black member of the Supreme Court.

Taney wrote the majority opinion in 1857 in Dred Scott, a case initiated in Missouri. The ruling, which provoked intense opposition in the North, said that people of African descent were not citizens and had no right to bring suit in federal court—effectively upholding slavery.

All nine Democratic members of the Keystone State’s Capitol Hill delegation, including U.S. Rep. Dwight Evans, the state’s only Black lawmaker, who hails from Philadelphia, where residents have been pushing to rename a city street that bears Taney’s name, voted in favor of the bill.

The House bill also would direct the Architect of the Capitol to remove other statues and busts of individuals connected with the Confederacy. The bill specifically mentions three men who promoted slavery and segregation — Charles B. Aycock, of North Carolina; John C. Calhoun, of South Carolina; and James P. Clarke, of Arkansas.

At least eight other statues and busts would be poised for removal under the measure, based on a preliminary assessment from staffers for Majority Leader Steny Hoyer, (D-Md.), who introduced the bill.

Those statutes include Alexander Hamilton Stephens, a former governor and U.S. representative from Georgia; and Edmund Kirby Smith, a Confederate general from Florida who already is poised to be replaced this year with a statue of civil rights leader Mary McLeod Bethune.

North Carolina’s statues also include Zebulon Baird Vance, who organized the Confederate Army’s Rough and Ready Guards and served as governor during the Civil War.

A similar bill passed the Democratic-controlled House last year on a bipartisan vote of 305-113, with 72 Republicans joining Democrats in support. But it did not advance in the Republican-controlled Senate, where Democrats now hold a slim majority.

“It is never too late to do the right thing,” Hoyer said during Tuesday’s floor debate, quoting Martin Luther King Jr. “And this, today, is the right thing. It reflects our growth as a state as we have confronted the most difficult parts of our history.”

Each state contributes two statues of people of historical importance to be displayed in the Capitol. Those statues can be replaced by state officials, who select who will be depicted and raise money for the statue’s creation.

The Joint Committee on the Library of Congress can approve or deny state requests to replace their statues, and determines where those statues are displayed in the Capitol.

Under the bill now awaiting a Senate vote, the statues with Confederate ties would be sent back to their respective states.

Confederate monuments, statutes and other commemorative symbols have undergone reconsideration across the South in recent years, particularly following the 2015 mass shooting in Charleston, S.C., in which a white supremacist fatally shot nine Black worshipers at the Emanuel African Methodist Episcopal Church.

During Tuesday’s debate over the statue-removal bill, most Republicans who spoke said they planned to support the measure, but criticized Democrats for not moving to replace the statues more quickly.

“It’s important the statues we have here reflect the values of this nation,” said Rep. Barry Loudermilk, R-Ga., adding that he too does not support the ideas espoused by Stephens, commemorated in one of Georgia’s statues and that “to say he was a racist was an understatement.”

However, Loudermilk said the joint congressional committee that signs off on replacing statues has met too infrequently, and has let requests from North Carolina and other states linger.

Back in his home state, Georgia state lawmakers have filed a resolution to replace Stephens’ statue with one commemorating the late civil rights icon, former U.S. Rep. John Lewis, the Georgia Recorder has reported.

The idea of including Taney at the U.S. Capitol was controversial well before sculptor Augustus Saint-Gaudens even started carving the piece, according to Maryland Matters.

Just a few months after Taney’s death in 1864, the U.S. Senate considered legislation to commission a marble bust of Taney as Congress had done for previous chief justices. But U.S. Sen. Charles Sumner, an ardent anti-slavery lawmaker from Massachusetts, opposed the proposal, saying his name “is to be hooted down the page of history.”

The rebuke was only temporary, though. Seven years later, when Taney’s successor as chief justice died, Congress ordered commissions for both of the late judges.

Hoyer noted that a statue of Taney has been removed from the grounds of the Maryland state House. Rep. Jamie Raskin, another Maryland Democrat, said the city of Frederick also took down a memorial to Taney several years ago.

Raskin praised the decision to honor Marshall, calling him “a great Marylander who has stood the test of time,” and deeply involved in the legal strategy to dismantle Jim Crow laws enforcing racial segregation.

The effort is the latest move by congressional Democrats to undo Confederate symbols on Capitol Hill and other federal property.

Last year, Speaker Nancy Pelosi, D-Calif., ordered the removal of four portraits of previous House speakers who served in the Confederacy. A statue of Confederate General Robert E. Lee of Virginia also was removed from the U.S. Capitol last year, after having been moved to a less-visible spot within the Capitol during Pelosi’s first stint as speaker.

Congress also voted last year to remove the names of Confederate generals from military bases across the South. A commission is beginning the process of renaming those bases, with a final report due to Congress in October 2022.