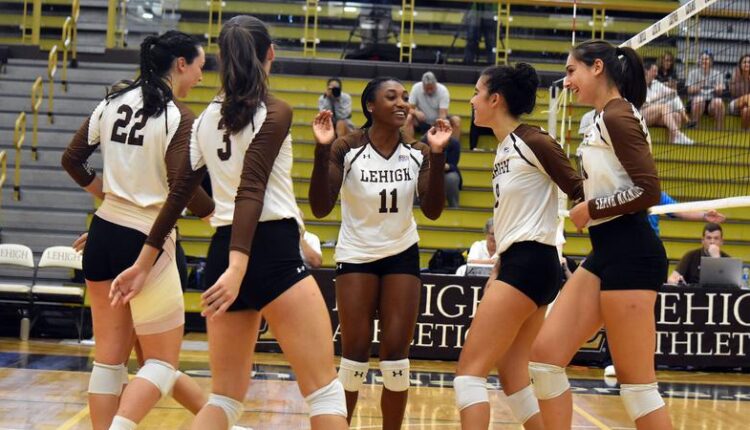 BETHLEHEM, Pa. – Lehigh volleyball is scheduled for back-to-back home Patriot League matches as the Mountain Hawks will host Loyola and Colgate this weekend. The Loyola game will begin at 7 pm on Friday and the Colgate match is set for 4 pm on Saturday. Friday’s match at Leeman-Turner Arena at Grace Hall will be streamed on ESPN+.

The Mountain Hawks (10-8, 1-3 Patriot League) are looking to get back on track after dropping three straight league matches.

Against American, sophomore Megan Schulte and first-year Natalie Luscomb posted a team-high of 11 kills. Sophomores Kyleigh Brown and Makenna Smith also put numbers on the board as Brown tallied 20 digs for the Mountain Hawks and Smith had a total of 42 assists.

On Saturday, Sophomore Emily Stewart finished with a team-high .429 attack percentage as well as three blocks.

Loyola (5-8) is currently 3-3 in league play after wins over Bucknell and Lafayette this past weekend. First year Riley Hamilton was awarded Rookie of the Week after finishing the weekend with 16 kills, 17 digs and four blocks. Senior Ashley Dwyer also earned an honorable mention for her performance.

The all-time series favors Lehigh by a 21-5 margin, with the Mountain Hawks securing the most recent win after coming back from a 2-1 deficit last year.

Lehigh’s toughest competition of the weekend will be against a Colgate (13-3) team that is currently undefeated in Patriot League play. The Raiders have won 11 straight matches overall. The Mountain Hawks will be looking for their first win over Colgate since October 2017.

For the 2022 campaign, three of six of the Patriot League Players of the Week have been Raiders. Colgate has also posted two rookies of the week so far as well.

Next weekend, the Mountain Hawks will face Loyola for a second weekend in a row as they travel to Baltimore, Md. for a 4 pm match against the Greyhounds on Oct. 15