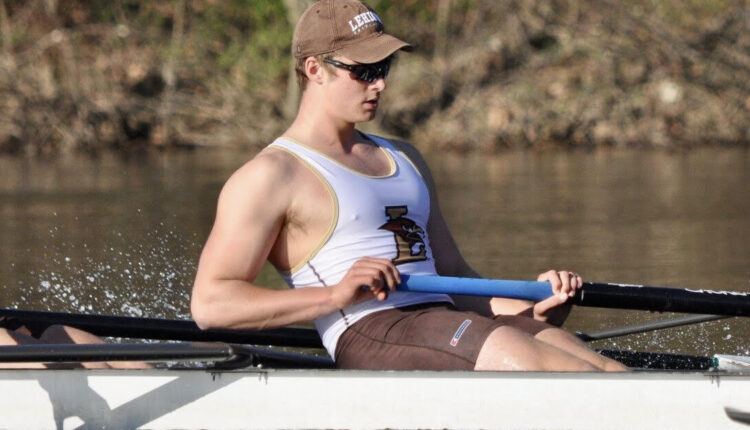 Junior Baxter Reihman had only been rowing for one year when he achieved his goal of becoming one of the fastest rowers on Lehigh’s rowing team.

Reihman walked on to the men’s rowing team in the fall of 2021. He now sits in the stern of the boat and serves as one of the team’s three captains.

Prior to arriving at Lehigh, Reihman said he played nearly every sport aside from rowing: soccer, basketball, tennis, swimming and more.

Dean Koski, Lehigh’s men’s soccer coach, knew Reihman before his admission to Lehigh because Koski was the coach of Reihman’s high school soccer club. Reihman said Koski gave him the option to either walk on to the soccer team or to be put in contact with the rowing coach.

Koski chose rowing because the team takes walk-ons every year and Koski recognized Baxter’s build and strength, which he thought would be good for the sport.

Early in the summer of 2021, Reihman reached out to Lehigh’s rowing coaches.

“I came in with the mindset that I wanted to be one of the top guys on the team,” Reihman said. “And right off the bat, I sort of recognized all the opportunities that would make me faster. So that mainly looked like doing a lot of extra meters.”

Reihman said when he joined the team, current senior Max McFadden took him under his wing. Reihman said they trained together and put in extra work to improve.

For Reihman, he said extra work looks just as diverse as his athletic resume — minutes on the erg, running, biking and pick-up basketball are among some of the ways he exercised.

Reihman said he likes to do cross training in addition to rowing because it is a good mental break from the monotony of repeated strokes.

Rowing is different from other sports in that it has two distinct seasons. First year men’s rowing coach Peter Costas compared the fall season to cross country and the spring season to track-and-field.

The men’s rowing championship season is in the spring, with the Mid-Atlantic Rowing Conference taking place at the end of April 2023.

“We train to prepare for competition,” Costas said. “Over the course of the year, the training will look different. It all serves (to increase) our speed over 2,000 meters in team boats. So, it’s a mix of technical, fitness and strategic development all serving May race performance.”

Last year, the rowing team placed second in the Mid-Atlantic Rowing Conference to Bucknell by 0.3 seconds. Reihman said losing to Bucknell by such a slim margin was heart-breaking because it meant the rowing season had been cut short.

Reihman said there were also positives to the loss, however. He said it helped to “fuel the fire” underneath the team and get rowers excited about training.

This season, Reihman said his goal is to drop his 2K time to 6:05, decreasing 10 seconds from his previous times.

Costas said Reihman’s hard work both socially and athletically have been very apparent to him, even in the short time that Costas has coached the team.

“I definitely see myself as a leader and a mentor to some of the younger guys on the team,” Reihman said. “This year I’ve done my best to step into the role of facilitating some of those events and being a voice from the team to our coaches. We recently had a coach (staff) that changed, so it feels like a great time to make some change happen.”

“Baxter (Reihman) plays a huge role in the team culture,” O’Meara said. “He’s always someone you can talk to and (at the dinner table) he was talking to the walk-ons and other freshmen, making sure that they always felt included.”