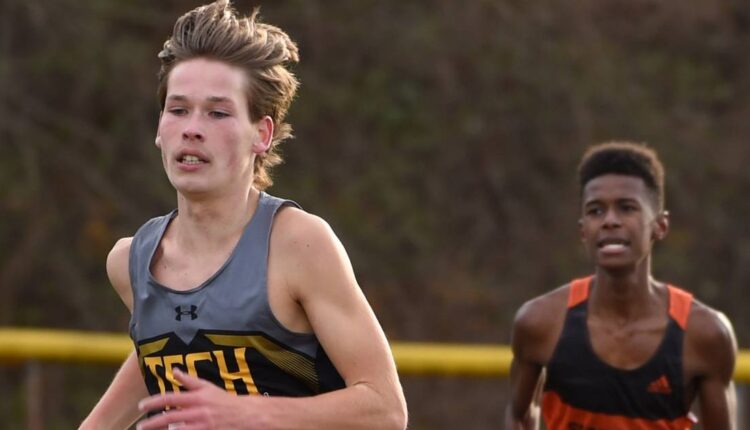 The Harford Tech boys cross country team was the best in Harford County in 2018. With a top five of Shannon Dooley, Kevin Baranoski, Zachary Taylor, Daron Taylor and Jacob Clendaniel, the Cobras swept the top three places in winning the Harford Invitational that year .

Had it not been for injuries, they were likely to win Tech’s first conference title in cross country and possibly even meet the Class 2A state, at which had three of the top five finishers..

Not surprisingly, four of Tech’s top runners from 2018 are competing in college — and they are doing well.

Baranoski lost his senior cross county season at Tech to the pandemic, but he kept running, including some training at 7,700 feet elevation in Colorado. In the open division of the Paul Short Run at Lehigh University last Friday, he ran a personal best of 24:36 for 8K and placed 23rd among 533 finishers. A freshman at CCBC Essex, he has been named NJCAA Cross-Country Division II Men’s Runner of the Week for his performances this season.

Identical twins Zachary and Daron Taylor have been consistent performers for UMBC. Members of Tech’s state champion 4×800 relay in 2019, they have focused on the steeplechase and 1,500 meters in track season at UMBC. Now juniors, the two ran in the Brown Division at Paul Short in which 403 runners competed. Zachary was UMBC’s No. 4 runners, finishing in 25:42. Daron ran 26:19. They are juniors.

Eric Baranoski, Kevin’s older brother, ran in the open division at Paul Short, finishing in 26:24. A Fallston graduate, he is an assistant cross country coach at Harford Tech.

North Harford alum Alyssa Santoro, now running for Salisbury University, challenged for the lead throughout the 6K women’s race at the Don Cathcart Invitational on Saturday in Salisbury. She finished second at 22:54 in a field of 83 to lead the Seagulls women’s team to an easy win.

Giles Daly, a Fallston graduate, placed 12th in the men’s 8K race at Salisbury’s Winter Place Park in 27:13. He led CCBC Essex to seventh place among a dozen teams.

Alexander Kirkland was the eighth man for the Naval Academy at a meet on the Notre Dame campus in South Bend, Indiana, on Sep. 30. A sophomore John Carroll graduate, he ran a personal best of 25:17 for 5 miles.

Bel Air varsity runners were absent from last week’s Harford Invitational. They stayed out so they could race three days later in the huge Paul Short Run at Lehigh University.

The opening Bill Brown cross country meet postponed last week by rain will be held at Tollgate Park on Sunday with registration and check-in beginning at 3 pm Info: belairrec.org.