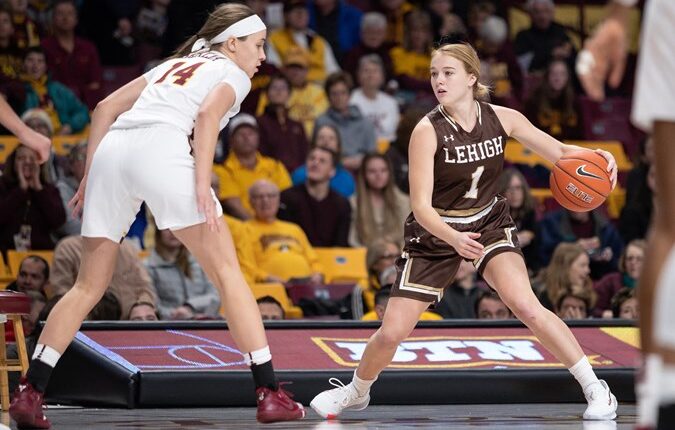 Entrepreneurship sparked Anna Harvey’s interest in high school, so the sophomore basketball student took the opportunity this fall to take part in Homefield Advantage, the new program Lehigh Athletics is promoting in partnership with the Baker Institute for Entrepreneurship, Creativity and Innovation student athletes.

“In high school, I did an entrepreneurship graduation project that lasted a year,” said Harvey, who participates in Lehigh’s Integrated Business and Engineering (IBE) program. “Homefield Advantage was the first time I saw an opportunity like this in college, and it was also specifically for student athletes.”

The aim of the 18 student athletes in the eight-week program was to bring more people closer to the benefits of safe living conditions.

The program ran from the end of September to November and ended with the last pitch competition.

“My group was working on a solution to improve the air quality of homes in Los Angeles,” said Harvey. “Our solution was to use existing products like air purifiers to make them available to low-income families suffering from air pollution.”

Getting from A to B was not always easy for Harvey and her team. It was similar to athletics – when there are often ups and downs on the road.

“We got kicked in the butt a couple of weeks ago,” said Harvey. “Chris Kauzmann (of the Baker Institute) painted a picture that we are here but walking around in circles. We got nowhere.”

At this point the student-athletes refocused and began reaching out to voters like landlords.

“We collected a lot of demographic and other data and found out where and what product was needed,” said Harvey. “We also worked with a mentor [Lehigh women’s lacrosse alumnus and former student entrepreneur] Lauren Beausoleil. Lauren has helped us see how and where we need to make progress and where we need to go. “

An important trait of student-athletes is coaching ability.

“As athletes, we take this issue of coaching to heart,” said Harvey. “Our group of athletes said, let’s find out … we have this. We have to be ready and have this under control before we can beat others.” [in the final competition].

“We have to be competitive.” That moment of being “kicked in the butt” could be compared to something in athletics.

“It was like being 10 behind at halftime and having this conversation about half-time,” said Harvey.

Harvey found the guidance and coaching of Kauzmann and Getzler of the Baker Institute along with Julie Ammary, Katie Guynn and Cait Gillard of Athletics very effective. You have tailored your coaching specifically to student athletes.

“They pushed us more aggressively as athletes, which was good,” said Harvey. “It was a real coaching mentality. I really appreciated all of your time and everyone else’s time, including my teammates.”

Harvey took home a lot from Homefield Advantage, as did all student-athletes.

“It was okay if we didn’t complete all of the steps,” she said. “This was an eight week program. It doesn’t take a year to embed the actual solution into the system.

Admitting that you don’t have all the answers is a by-product of self-awareness, similar to what happens on the field of play.

“In basketball, there is point guard, post, wing, shooting guard and striker,” said Harvey. “Everyone has their own job, but it’s about how we all fit together. Everyone will make mistakes, but we have to move on.”

“What you think is the solution vs. the solution you need are not always the same things,” she said. “You have to go to the source to see if it’s needed.”

Getting to the source requires communication. Instead of communicating within the athletics landscape this fall, it did so in a different setting (as the fall seasons were canceled due to the COVID-19 pandemic).

“We had a team mindset,” said Harvey. “It’s about finding out together as a team. We all tried very hard to make the best possible presentation. No one was ahead of the other.”

Team-first mentality is an important quality that defines a strong athletics team. It’s even one of the five pillars of Lehigh’s athletics leadership – along with self-esteem (as mentioned earlier), integrity, competitiveness, and toughness.

The competition at the end of the eight weeks also matched the pillars perfectly.

“As athletes, we’re so competitive,” said Harvey. “While that experience didn’t get us class recognition, we were trying to make a difference in the world and help others. There was definitely an initiative and an incentive to do this program.” As Harvey learned, entrepreneurs fail … a lot. It’s another parallel to athletics and one of the reasons entrepreneurs and athletes go together so naturally.

“All athletes have to deal with failure,” she said. “You can turn the ball or miss a shot, but you just have to go ahead and find out.”

That’s exactly what Harvey’s team did.

“I’m very grateful for this opportunity because there were definitely moments, especially during the shutdown, when there was no power outlet,” she said. “We all have our other classes, but it got very tiring very quickly and we could alternate it with something like that.

“Julie said we put all of our frustrations into this program,” continued Harvey. “It was a good distraction and the fact that we are trying to help people was a huge plus.

“Thank you everyone [with the Baker Institute and Athletics] who pushed us to improve. “