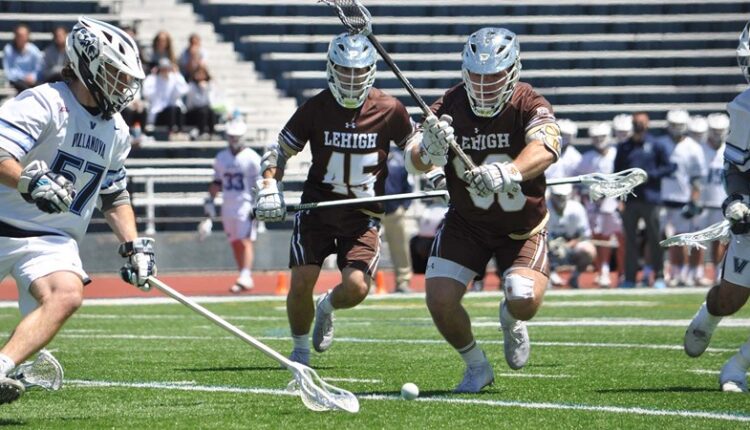 No. 5 Mountain Hawks Drop Regular Season Finale at No. 16 Villanova

VILLANOVA, PA. – No. 16 Villanova took a 9-2 lead at halftime and didn’t look back. On Saturday afternoon there was a No. 5 loss for the Lehigh men’s lacrosse team No. 5 at Villanova Stadium. The defeat was the first for the Mountain Hawks of the season when they reached the Patriot League 9-1. Tournament went. Lehigh will host the winner of the Boston University quarter-final against Colgate in the semi-finals this coming Friday at 4 p.m.

“I want to give my cap to Villanova,” said Lehigh’s head coach Kevin Cassese. “I thought you played an extraordinary game. We were never really into that game. You controlled it from the start. Congratulations to you.”

In the end, 24 Mountain Hawk sales and 8 out of 15 clearing hurt. Fourteen of Lehigh’s sales were caused by Villanova. The defeat is responsible for Lehigh’s leading winning streak in 13 games from last season.

With a draw, the Wildcats scored seven goals in a row and took an 8-1 lead. Sophomore Justin Tiernan faced the extra man from classmate Christian Mule ‘, but the Wildcats responded with the next four – including three right at the start of the third quarter – to dispel many doubts.

The Mountain Hawks scored three of the next four goals to score within 13-5 at the start of the fourth quarter, and six of the game’s last ten goals overall, but it was too few, too late.

Juniors Tommy Schelling and Cole Kirst led the offensive with two goals each. Mule ‘had a goal and assisted. Senior Matt Douglas scored three groundballs and two generated sales on the defensive, while classmate Teddy Leggett had six groundballs in his career that exceeded 200 – the seventh player in program history to hit that plateau. The program director in this category, PhD student Conor Gaffney, also collected two groundballs to dwarf 400.

Junior Mike Sisselberger won 20 of 22 with eight groundballs. Senior James Spence made seven saves in the first quarter and ended with 13 saves in the afternoon. A pair of Wildcats goalkeepers combined for 10.

The final shots were 43-41 in Villanova’s favor, while Lehigh had a 30-24 lead at groundballs.

The Mountain Hawks are back in action on Friday as they host either Boston University or Colgate in the Patriot League semi-finals at 4 p.m. on the CBS Sports Network. After this game, Army West Point will face the winner of Loyola and Navy at 7pm