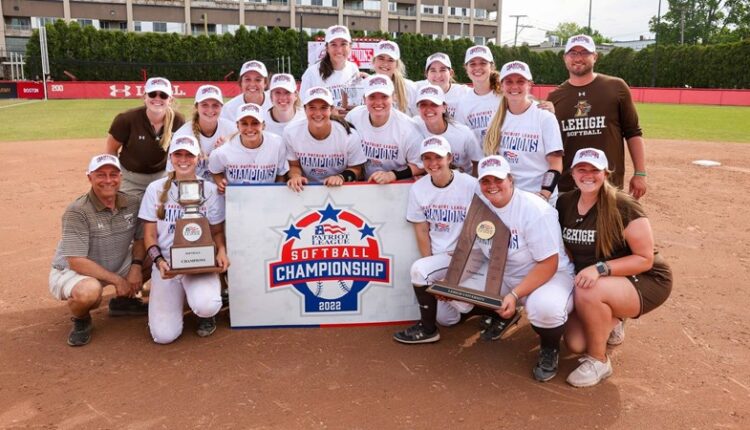 Behind stellar pitching performances from senior Gabriella Nori and sophomore Katelyn Young, Lehigh took two from the Terriers at BU Softball Field to win its first title since 2017.

Nori fired a five-hit shutout as the Mountain Hawks won game one 1-0 and then Young blanked the Terriers through the first six innings of a 4-1 championship-clinching win.

Seniors Jaelynn Chesson and Addie Kittel provided the offense in game two as Chesson drilled a three-run home run in the third inning and Kittel followed with a solo shot.

Nori was named the tournament’s Most Valuable Player and was joined on the All-Tournament team by Young, Chesson and Kittel.

“What a gritty performance in game one,” head coach Fran Troyan said. “Gabi Nori battled 100 percent and we took advantage of the one mistake that they made. We felt like if we could get that first game, good things would happen in the next game. The momentum switched and the pressure turned to them a little bit .We finally got to Boaz in that one inning where we scored four runs and hit a couple of home runs.It sounds like a cliché but I could not be prouder of this team.They have fought so hard.They’re a resilient group and I’m just so happy for you.”

With Saturday’s sweep, Lehigh enters the NCAA Tournament at 30-18-1. The Mountain Hawks will be making their 11th NCAA Regional appearance.

Like Friday’s winner’s bracket meeting, Nori and BU’s Allison Boaz were locked up in a pitcher’s duel. The only run of the game came in the third inning when junior Josie Charles reached on an infield single, moved to second on a sacrifice bunt, went to third on a ground out by junior Emily Cimino and then scored on a throwing error.

Nori allowed base runners in six of the seven innings but worked out of trouble every time. In the seventh, she allowed a leadoff single to Lauren Nett, but came back to retire the Terriers with a lineout to center and a pop out to shortstop.

With her second shutout of Boston University in the last eight days, Nori improved to 11-10 on the season, allowing five hits while walking one and striking out one.

In the third, Charles and Barjaktarovich reached on back-to-back singles with one out. Cimino grounded into a fielder’s choice for the second out, but then Chesson followed by hammering a 3-2 pitch out to right center for a three-run home run to put the Mountain Hawks in front 3-0. The home run was Chesson’s 14th of the season, establishing a new Lehigh single-season record.

Kittel followed Chesson by hitting a 1-0 pitch over the center field fence for her eighth home run of the season, putting the Mountain Hawks up by four.

Young continued rolling along, allowing baserunners but keeping the Terriers off the scoreboard.

BU put two runners on with one out in the fifth but Young battled back to retire the side on a fly out and a force play.

The Terriers (40-17) scored their lone run of the day on a Kate Pryor RBI single in the seventh before a fielder’s choice and a ground ball to first base set off the Lehigh celebration.

Young allowed a run on five hits over seven innings with a walk and a strikeout. The Mountain Hawks had six hits off of three Boston University pitchers.

“Katelyn did a great job all weekend long,” Troyan said. “She pitched three games and did an incredible job and her best days are ahead of her.”

“We have worked really hard with this team on the mental side of things on a daily basis,” Troyan said. “They were a little resistant at first but they bought in and once we started having some success, they went from resistant to compliant to obsessed about winning, which was really cool.”