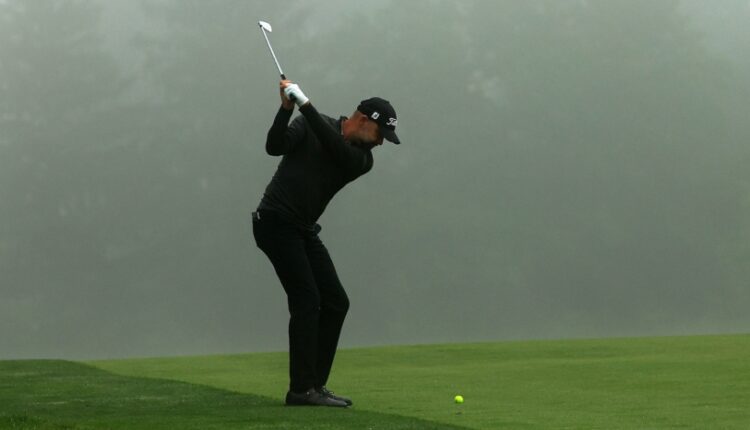 Rob Labritz embraces the journey at US Senior Open Championship

BETHLEHEM, Penn. – They arrive all the time, examples of how this thirst for competitive golf puts a grip on you and doesn’t let go. Especially uncanny are those times when you discover how the game seeps through a family to such a degree that out-of-the-ordinary actions seem ordinary.

Like arriving at 1 am and just sleeping in your car, a move that didn’t faze Matthias Labritz. “I didn’t want to wake up my dad,” said 19-year-old who had driven down from Westchester County in New York after a full day’s work at GlenArbor Golf Club. “I knew he had an early tee time.”

“He” being one of the feel-good stories on the PGA TOUR Champions this year, Rob Labritz, who remains an inspiration to his son.

“I’ve watched him spend lots of years grinding, practice, working so hard,” said Mathias, whose father has been the longtime Director of Golf at GlenArbor. “It’s so great.”

The story has become exponentially greater after two days of Labritz’s first US Senior Open as he has thrown down a pair of 69s to get halfway home in 4-under 138. As he buoyantly expressed his great joy to the media (“I’m a blessed man,” he said), Labritz was tied for the clubhouse lead, only to be passed by Steve Stricker who finished birdie-birdie to shoot 69 – 137 and get to 5-under.

There was still an afternoon wave to come, but it didn’t put a dent in Labritz’ enthusiasm.

“I’ve been planning on this for a long time,” he said. “I swear to myself I was going to play the Champions Tour.”

Shortly, a competitor who is a study in stark contrast to Labritz came sauntering into the interview area having shot 72 – 139 to get in at 3-under. Jay Haas, 68, outnumbers Labrtiz by a wide margin when it comes to starts beneath the PGA TOUR umbrella (1,148 to 23), but is on the same page regarding the passion on which this PGA TOUR Champions Q School medalist was swept into this week’s competition.

“I think if you’ve played golf most of your life, you look at a tournament like this and whether it’s the first time or the 10th time, it’s pretty special (to qualify),” said Haas. “I think most of the guys feel like they’ve made it to ‘The Show.’

“You go into the locker room and there’s a locker with your name on it. That doesn’t every get old.”

What also doesn’t get old is how determined competitors keep their games in good shape all for the chance afforded them by the PGA TOUR Champions. In an earlier chapter to his life, Labritz, who grew up in Southington, Conn., was good enough to play the Canadian Tour fulltime before he decided a club job was better for his growing family.

Knowing a PGA TOUR Champions try was approaching, Labritz in 2020 and 2021 had quite a stretch in his neck of the woods – wins at the Rhode Island Open, Westchester Open, Massachusetts Open, and Travelers pre-qualifying. “I was 4-for-4,” beamed Matthias, who caddied for his father in all those tournaments.

The Q School magic in the fall of 2021 was validation for Labritz, who has followed through with decent play thus far this season. In 11 tournaments, he has one top 10 and $168,353 to sit 48th on the money list.

Forty-five years earlier, the PGA TOUR Q School had tested a young man out of Wake Forest and Haas was equal to the task. His was a graduating class that included Peter Jacobsen, Mike “Radar” Reid, Don Pooley, Keith Fergus, Graham Marsh, and the late, great Jack Newton.

Hard to argue that Haas hasn’t parlayed it into a marvelous career – nine PGA TOUR wins, 18 more on the PGA TOUR Championships, and a combined $34.13m between the two circuits.

Certainly, there’s a wide disparity between these two careers – the 68-year-old veteran in his 47th year of professional golf life with the PGA TOUR and the 51-year-old in his first season under the PGA TOUR umbrella.

But there’s barely a difference between them two rounds into this US Senior Open – Haas at 3-under, one stroke behind Labritz. Chalk it up to the ageless wonder of a guy who jumped into this pro golf life when Gerald Ford was president and the enthusiasm of a guy who isn’t about to think it’s time to rest because he’s made it.

“It’s been a long road. I’ve worked my tail off,” said Labritz, who reached down to pick up his 17-month-old daughter, Logan, while another daughter, Ryan, 8 soaked in the atmosphere.

“I’m going to work my tail off to stay out here so I can pay for her college when she turns 18.”

Matthias smiled as his father spoke. He just finished his freshman year at LSU and said what drew him to Baton Rouge was the desire to travel and experience a different part of the country.

He enjoys playing golf, just not the ultra-competitive stuff that is his father’s life. “I want to become my own person,” said Matthias, who in that way is very much like his dad.