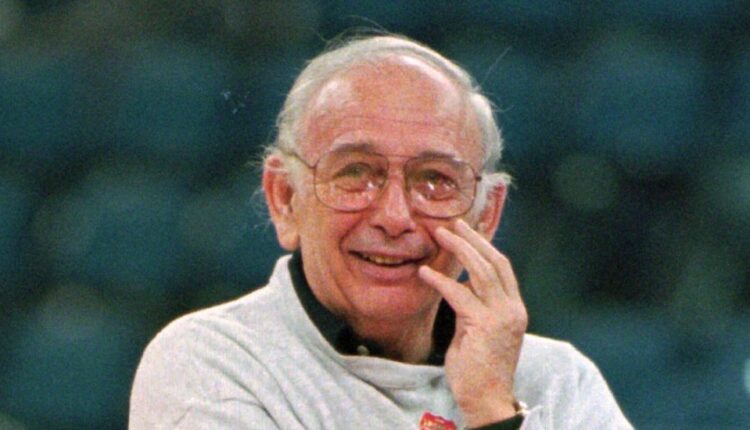 Pete Carril, who coached men’s basketball at Princeton for 29 years and scared big-name opponents with his undersize, often underskilled scholars playing an old-fashioned textbook game, died on Monday. hey what 92

His family announced the death in a statement posted on the Princeton Tigers’ website. It did not say where he died or give the cause of death.

As the men’s head coach from 1967 to 1996, Carril (pronounced care-ILL) taught a thinking man’s basketball at Princeton. As an Ivy League member, Princeton could not offer athletic scholarships, and its academic demands were high, but Carril’s teams, almost invariably outmanned and overmatched, still won twice as often as they lost.

His record at Princeton was 514-261, with 13 Ivy titles, 11 appearances in the National Collegiate Athletic Association’s championship tournament, two in the National Invitation Tournament (his team won in 1975) and only one losing season. Fourteen of his Princeton teams led the nation in defense. In 1997, he was elected to the Basketball Hall of Fame in Springfield, Mass.

He emphasized a deliberate off-the-ball offense that kept players passing the ball and setting screens until a shooter was open or someone broke free to the basket in a patented backdoor play. The scores were low, and no matter how much opponents prepared, they were frustrated and often lost their poise.

“Playing Princeton is kind of like going to the dentist,” said Jim Valvano, the North Carolina State coach who died in 1993 at 47. “You know that down the road it can make you better, but while it’s happening it can be very , very painful.”

In the NCAA’s annual tournament, Carril’s teams might lose to national powers but not before unnerving them and threatening an upset. In the first round alone, Princeton lost to Georgetown by 50-49 in 1989, Arkansas by 68-64 in 1990 and Villanova by 50-48 in 1991.

Carril’s final college victory came on March 14, 1996, in Indianapolis, in the first round of the NCAA tournament against UCLA, the defending champion. Thirteenth-seeded Princeton, 7 points behind with six minutes left, scored on — what else? — a backdoor with 3.9 seconds left and won. The next day, The Daily Princetonian, the student newspaper, ran this headline across Page 1:

Carril said he was under no illusions: “If we played UCLA 100 times, they would win 99 times.” (The Tigers went on to defeat, 63-41, in the second round against Mississippi State.)

Around the Princeton campus he was a revered, raspy-voiced figure in a well-worn sweater and baggy khakis (or, when he dressed formally, a bow tie). A colleague once described him as “a rumpled Lilliputian who would look as out of place in an Armani suit as he would in a Vera Wang gown.” And during games he was known for an animated coaching style.

Every year at his first practice session, Carril made the same speech to his players.

“I know about your academic load,” he said. “I know how tough it is to give up the time to play here, but let’s get one thing straight. In my book, there is no such thing as an Ivy League player. When you come out of that locker room and step across that white line, you are basketball players, period.”

But he also told his players:

“Princeton is a special place with some very special professors. It is something special to be taught by one of them. But you are not special just because you happen to go here.”

Pedro José (later known as Peter Joseph) Carril was born on July 10, 1930, in Bethlehem, Pa. His father, an immigrant from Spain, worked for 40 years at the blast furnaces of Bethlehem Steel and, his son said, never missed a day of work.

In high school in Bethlehem, Pete was an all-state basketball player, and at Lafayette, where he played for Butch van Breda Kolff, he was a Little All-American. Then, for 12 years, he coached high school basketball in Pennsylvania while earning a master’s degree in education from Lehigh University in 1959.

In the 1966-67 season, he coached Lehigh to an 11-12 record. Then, van Breda Kolff, who was coaching Princeton, left to coach the Los Angeles Lakers of the National Basketball Association. Princeton considered Bobby Knight and Larry Brown as successors. Instead, it took Carril.

He left college coaching after the 1995-96 season.

“I’ve been dodging bullets for 30 years,” Carril said. “I find I’m not seeing as much. I used to think the kids felt my coaching was worth five points a game to them. Maybe it was, but I get the sense they don’t feel that way now. I think I make less of a difference.”

The next year, he became an assistant coach of the Sacramento Kings of the NBA under Coach Rick Adelman, spending most of his time breaking down game tapes. He stayed with the team for most of the next decade, retiring in 2006, but three years later, at 78, he rejoined the Kings as a consultant.

“Being an assistant doesn’t bother me at all,” he said. “The aggravation and the pain in your stomach and the headaches that you get when you see things that are done wrong or when you lose, or all those problems you have as a head coach, I’d had enough.”

With Dan White he wrote “The Smart Take From the Strong: The Basketball Philosophy of Pete Carril” (1997). His coaching methods were even the subject of an academic paper by a Fordham University marketing professor, Francis Petit, titled, “What Executives Can Learn From Pete Carril.”

Information on his survivors was not immediately available.

Carril was ambivalent about his success. He once said: “People ask me, ‘How do you want to be remembered?’ I tell them I don’t.”

But he will be remembered, even though none of his teams gained the ultimate honor. He brushed that off, too.

“Winning a national championship is not something you’re going to see us do at Princeton,” he said in his final years there. “I resigned myself to that years ago. What does it mean, anyway? When I’m dead, maybe two guys will walk past my grave, and one will say to the other: ‘Poor guy. Never won a national championship.’ And I won’t hear a word they say.”