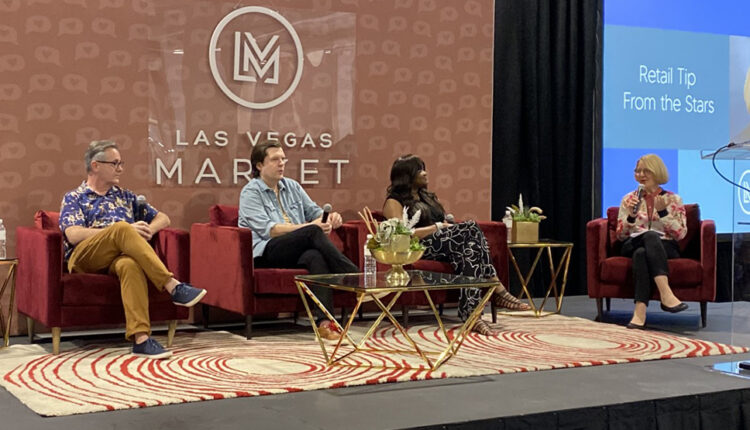 How Do Small Independents Thrive in a Competitive Landscape? Keep It Local and Experiential

Retail Stars talk about their business strategies during a panel at Las Vegas Market yesterday.

Two independent retailers capitalizing on consumers’ need to experience product in person shared their strategies – and challenges – during a panel at Las Vegas Market.

While Domaci Home is located in a 2,000-square-foot location on Bethlehem’s Main Street, it uses creative approaches to expand its reach beyond four walls. Through a partnership with its current landlord, for example, several Airbnbs above the store are furnished with Domaci furnishings, so people can try before they buy. “That’s additional showroom space for us,” said Warren Clark. They also offer live music in the store.

“As many reasons you can give [people] to come into your store, the better,” said Warren Clark.

Oasis Accents initially started with more home décor and accessories but shifted to emphasize local art during the pandemic, White said. While she does still offer home décor – she called herself “your accessorizer” for the home – she now features art from about 25 local artists from the Dallas/Fort Worth area.

As an artist, “it’s hard to scale your art,” she said. “Having a brick-and-mortar location gives them exposure.”

And when art is pricey, people want to come in person to see it and have a connection with that piece of art, she said. “The challenge is how to get more people to buy the less expensive pieces online.” She offers both affordable, decorative art – which could cost $299, for example – as well as more collectible art, which has cost up to $18K.

Furniture is half of Domaci Home’s business, the balance is accessory items, including tabletop – a really strong category, especially as they recently started a bridal registry – as well as a private label candle program, which brings back repeat customers. And being in the “Christmas city,” they also do a ton of ornaments and other holiday accessories.

But these retailers also find that their websites are critical to their business, too. “Sixty percent of people go to the website first before they go to the store,” Derrick said, and in fact Domaci Home initially began as an e-commerce site. “Consumers are so much more educated about the product and the retailer.” Warren Clark said his partner does such a professional job with the website that people ask if their store is part of a national chain. The store also has a handful of kiosks throughout the store so people can search online while in the store.

White’s focus on her e-commerce business keeps her up at night, as she wants to sell to consumers across the country and is working on a cohesive strategy to put her store on top of search results when people are looking for original or canvas art.

They also outsource tasks when others can do it better. White has someone come in once a week to do four to five reels for social media – a tip she gleaned from someone else at January’s Las Vegas Market.

Like other industries, hiring has been a challenge. And the salary expectations nowhere near match what a small retail business is able to provide, said Derrick Clark. Domaci Home has advertised for employees through Facebook, Instagram and Indeed, as well as at several local colleges and by word-of-mouth. But one of his best sales people now was formerly a customer, said Warren Clark.

Another concern is bad vendor reps, especially when they don’t call you back, don’t put orders through, or don’t know what’s appropriate for the store, Derrick Clark said.

Going forward, White said she wants to expand into the commercial industry, as Frisco is a growing area for businesses, the Dallas Cowboys are based there and the PGA just moved there, for example. “That’s an opportunity for me to tap into.”

Overall, the retail landscape has changed. “Five, ten years ago we were so worried as an industry about the Wayfairs, the Amazons … and that brick and mortar was dead. Now it’s the complete opposite,” as both Wayfair and Amazon are opening stores, said Derrick Clark.

Brick-and-mortar locations are not going anywhere; people are looking for a reason to go in, they want to sit on that sofa, he added. “They don’t want to go into those big box stores with tan walls.”