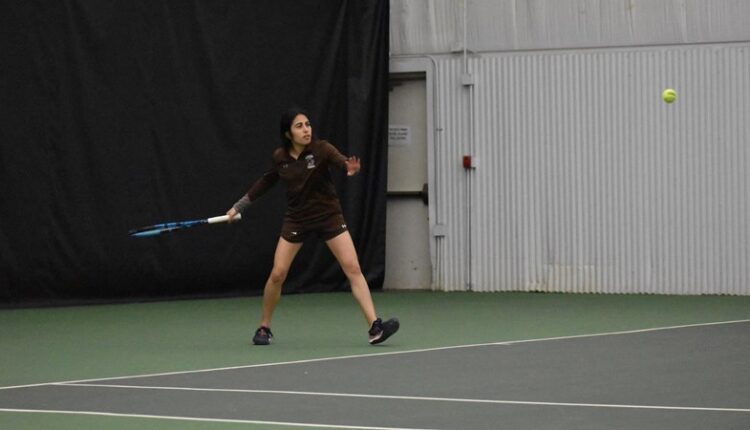 BETHLEHEM, Pa. – The Lehigh women’s tennis team put its heart and soul into Sunday’s match against Lafayette in the Rivalry presented by Lehigh Valley Orthopedic Institute. The Mountain Hawks went down to the wire with the Leopards but were able to pull off the 4-3 win at the Lewis Tennis Center.

Lehigh got off to a great start in doubles play, securing the 1-0 lead going into singles. First-year Hamsa Javagal and junior Junmoke James picked up the first win of the day for the Mountain Hawks, defeating Lafayette’s Maureen McCormack and Eleanor Campbell 6-2 at the No. 2 spot.

Sophomores Anushka and Megha Dania had quite the performances for Lehigh on Sunday. The duo grabbed their first win of the day during doubles, defeating Olivia Boeckman and Melania Sparhawk 6-1 in the first flight.

Moving into singles play, the Mountain Hawks were feeling it. Javagal got Lehigh off to the right start, defeating McCormack 6-2 in two sets in the second flight. The first-year extended Lehigh’s lead to 2-1 after her singles victory.

Anushka Dania secured her second win of the day during singles play, defeating Sparhawk 6-0 in two sets at the No. 4 spot. Lafayette climbed its way back and tied the Mountain Hawks with one match remaining.

Megha Dania had all eyes on her at the Lewis Tennis Center on Sunday. Dania fell to Lafayette’s Jessica Siegel 7-5 in the first set. Dania made a huge comeback in the second and third sets to secure the win for Lehigh. The sophomore defeated Siegle 6-1 in the second set and 6-3 in the third set to clinch Lehigh’s fifth win of the season.

The Mountain Hawks will head to West Point, NY next weekend to battle Army on Friday, April 8 and Boston University on Saturday, April 9.

Lessons in Creativity and Communications