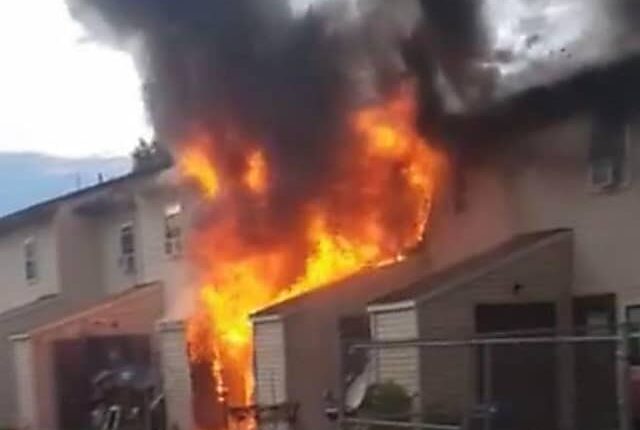 A 12-year-old boy has been arrested in connection with an arson that displaced 24 people from seven Pennsylvania homes, authorities say.

Middletown Borough police were called to a working fire at Genesis Court Apartments on Thursday at 7:17 pm, according to a release by the department.

The fire had broken out at 7 pm in the rear of one of the townhomes in the complex and was knocked down in about 20 minutes, according to multiple fire companies called to the scene.

3A “preliminary investigation determined that the fire started in an attached shed to the rear of one of the apartments and spread to the main building,” as stated in the release.

No injuries were reported but 11 children and 13 adults were displaced after the fire impacted seven homes, according to the Red Cross of Greater Pennsylvania.

An investigation by the Middletown Borough Fire Marshall determined that the fire was “incendiary in nature caused by an open flame applied to combustible materials by human hands.”

The boy suspected of starting the blaze was arrested at 9 pm, according to the police.

He was charged with Arson, Recklessly Endangering Another Person, and Reckless Burning, the release explains.

He has been remanded to the custody of the Dauphin County Juvenile Probation Services, the release details.

The Middletown School District has planned a donation drive with a collection at Middletown Area High School on Monday, August 15, from * am to 3 pm Details about the drive can be found here.

At least two of the families displaced by the fire have launched GoFundMe campaign’s to help them get back on their feet. You can donate to those campaigns here other here.