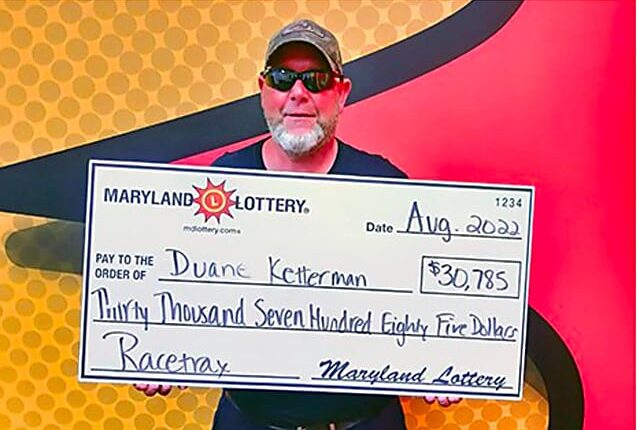 This time around, Duane Ketterman won even bigger: The Delaware resident claimed a $30,785 Racetrax prize.

“I couldn’t believe I won the first time,” Duane told Lottery officials on Tuesday, referring to his $18,000 Racetrax win in early July. “So, when I saw this one, I was just stunned.”

Ketterman’s work as a powerline technician takes him across the Maryland state line every day. He got in the habit of purchasing lottery tickets in Maryland on those trips and, if the events of the last five weeks are considered, he’s in the habit of winning big here as well.

Ketterman was in Baltimore to claim a $30,785 Racetrax prize he won over the weekend, picking his Trifecta numbers at random – 3, 11 and 12 – playing them for 20 races last Sunday as he and his family passed through Queen Anne’s County on a trip.

He added the Bonus multiplier to his ticket, too. When they stopped for breakfast a few hours later, Duane discovered that Lottery luck had struck again and boosted his prize by 5x due to the Bonus feature.

“I checked the ticket on my lottery app and, after a moment to wrap my head around it, showed my wife,” Duane recalled. “She was as surprised as I was. More, even.” The couple has no immediate plans for the Racetrax winnings. “Something will come up, good or bad, and we’ll have this to help handle it,” he said.

The 43-year-old purchased his $30,785 winning ticket from Dash In #14331 at 401 Thompson’s Creek Road in Stevensville. The owners of the Queen Anne’s County store will receive a $307.85 bonus from the Lottery for selling the lucky ticket. The bonus is equal to 1% of the prize.

Roe’s reversal puts abortion access on the ballot in Pennsylvania