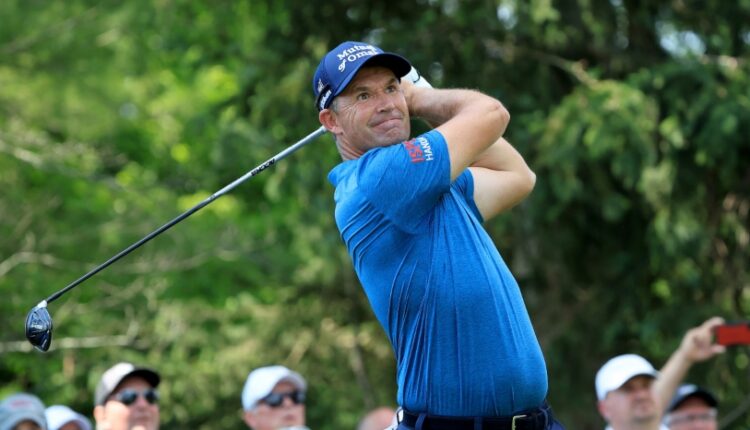 All of that is a given.

But should you ponder some of the similarities to this year’s US Senior Open at Saucon Valley to what took place at Royal Birkdale in the Open Championship 14 summers ago, you could suggest that Padraig Harrington is now what he was then – a uniquely fascinating competitor.

We will stay way short of comparing the prize that awaits (the Francis Ouimet Trophy) should he protect his comfortable, five-stroke, 54-hole lead in the 42nd US Senior Open to the second straight Claret Jug that he earned in 2008.

And Harrington will emphatically tell you not to compare his signature moment Saturday (5-wood from an adjusted yardage of about 263 to inside of 10 feet for the day’s only eagle at the par-5 12th) to his iconic shot at Birkdale (on the 71st hole he hit a 5-wood to 5 feet from 278 cards to make a clinching eagle).

“The one at Birkdale is probably the best shot I’ve ever hit in my life,” said Harrington. “Today’s was a good shot.”

No argument there, but what he did at Saucon Valley’s 12th hole encapsulates why he is at 11-under 202 and leading by five going into Sunday’s final round. Harrington was the only player in Round 3 to reach the 608-yard 12th in two, his eagle is the only one made there, and at 9-under on the three par-5s he is definitely playing to his strength.

“I have an advantage on those holes,” said Harrington, who at 50 is supremely fit and still plays quality golf when he tees it up with the younger crowd. “If I don’t take that advantage, it feels bad for me.”

Bogeys on two of his final four holes – after he had gone 42 holes without a bogey going back to the ninth hole Thursday – left Harrington attempting to sort out his emotions. The 5-under 66 had plenty of highlights, but Harrington is as deep a thinker as you’ll find in pro golf, so after indicating “that I’m not really sure what to think,” he rattled off some thoughts when pressed about the chase for his first PGA TOUR Champions victory in his ninth start.

“Don’t overthink it between now and tomorrow,” he said. “(But) with a five-shot lead, I’ve given myself plenty of options to win this tournament. That’s the important thing.”

He could play well and run away from unheralded competitors like Gene Sauers and Rob Labritz, both of are at 6-under 207, or the vaunted Ernie Els (209), or the PGA TOUR Champions’ best player this year, Steven Alker (210 ).

Harrington shrugged, nodded his head, then added: “I could play average and someone will have to come at me. Or I could play badly and I’ll still have a chance. As long as I keep my head on my shoulders, even if I play badly, just stick in there.

“I’ve basically given myself a lot of hands to win this.”

Indeed, he has, but there’s one guy who in pursuit of Harrington who seems to have more ways to win. Labritz, a lifelong club pro who was medalist at Q School last year and is 48th on the current money list, knows he could roar inside the top 36 on the Schwab Cup standings with even a runner-up.

“I’m not worried (about being five behind Harrington). I’m going to go out there and play my game,” said Labritz, who has been signing autographs between holes and took videos on the first tee to capture the moment.

“Wherever the chips fall, they fall. There are guys out here who have been doing this for 30 years. If they play better than me, so be it.”

That’s the sort of attitude that serves you well in this line of work, but there’s the deal: No one has perfected that attitude quite like the Irishman.

Take Birkdale ’08, for example. Harrington had the morning draw for Round 1 and the rain came down in buckets. A couple players quit, it was so bad, the moans and groans could be heard clear up to R&A headquarters in another country and yet Harrington with his opening 74 smiled.

“If you told me we all have to tee it up again tomorrow in the same conditions,” he enthusiastically said that day, “I’d look forward to that test.”

His 74 had him in a tie for 38th, five off the lead, and when reminded of that open, Harrington said yesterday, “I facetiously asked, ‘Has anyone won the open from the bad draw?’ ”

The record is there to confirm, should you want, but Harrington followed with 68-72-69 and that historic 5-wood to raise another Claret Jug.