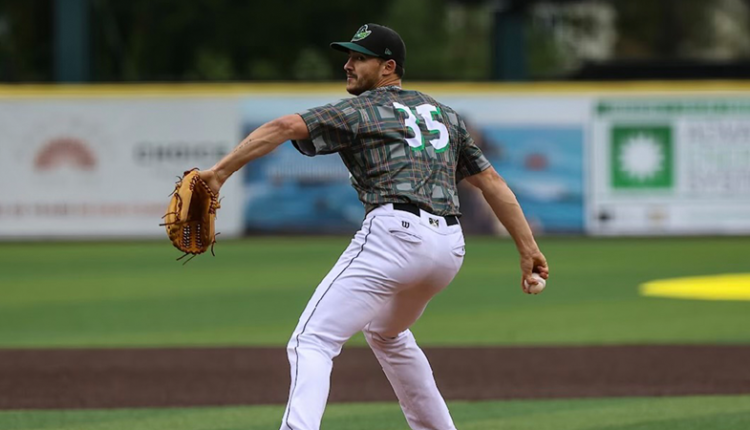 BETHLEHEM, Pa. – Two months into the minor league baseball season, four former Lehigh baseball student-athletes are currently making their marks at the professional level, headlined by two call-ups including 2017 draftee Mark Washington to Triple-A and 2021 selection Mason Black to High- A as the other two continue to perform at a high level for their respective clubs.

Washington, who began the season with the Tulsa Drillers in Double-A, earned promotion to the Triple-A level with the Oklahoma City Dodgers on May 28. Since his call-up, Washington has made four appearances with OKC, going 0-0 with 0.00 ERA in 3.1 innings, giving up just one hit with four strikeouts and no walks. He has not played since June 8 due to injury, but has had a remarkable season overall with both teams, going 3-0 with an ERA of 1.01 in 19 games, recording four saves. He has thrown 26.2 innings with 26 strikeouts, 10 walks and a 0.75 WHIP.

A 2021 third-round draft pick of the San Francisco Giants organization, the right-hander Black made an immediate impact after making his pro debut this year with the Single-A San Jose Giants. In his first-ever professional game, Black struck out seven batters over four innings of work with one-hit allowed against the Modesto Nuts, affiliate of the Seattle Mariners. In eight starts with San Jose, Black went 1-1 with a 1.57 ERA over 34.1 innings of work. He struck out 44 batters, walking eight and held batters to an average of .198. A promotion to the Eugene Emeralds of High-A on May 24 resulted in immediate success, totaling 10 strikeouts in six innings with one run allowed, five hits and the win against the Tri-City Dust Devils. So far in 2022, he is 2-2 with a 2.44 ERA in 12 starts, striking out 68 batters over 55.1 innings.

2019 third-round draft choice Levi Stoudt might have the best overall stuff of the four pitchers in minor league baseball and has spent time with the Arkansas Travelers in Double-A for the Seattle Mariners. Stoudt has had some solid performances this year, most of which came in the month of May. In five May starts, Stoudt went 2-1 with a 3.67 ERA, striking out 26 with four walks in 27.0 innings of work. In 13 2022 starts, Stoudt is 4-4 with a 5.07 ERA with 66 strikeouts in 65.2 innings of work.

Another draft selection from 2021, right-hander Matt Svanson has also seen some ups and downs this season, playing for the Single-A Dunedin Blue Jays. He went 3-0 in the month of May with a 4.43 ERA, striking out 25 batters with 10 walks. In 11 appearances with six starts for Dunedin this year, Svanson is 3-4 with an ERA of 5.27 with 44 strikeouts.

2019 draft pick Jason Reynolds, who was playing for High-A Fort Wayne in the Padres organization at the beginning of this season, retired from professional baseball on May 9. He concluded his career with an 8-5 record and a 5.01 ERA in 51 Appearances over three seasons. Reynolds struck out a total of 91 batters with 88.0 innings accumulated.

Stay in the loop with former Lehigh baseball players in professional baseball by following the hashtag “#LehighInThePros” on social media.