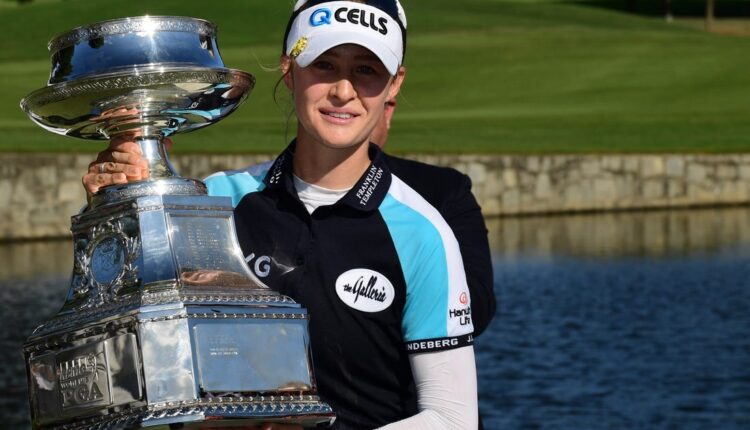 PGA TOUR
LAST TOURNAMENT: US Open (Matthew Fitzpatrick)
THIS WEEK: Travelers Championship, Cromwell, Conn., June 23-26
Course: TPC River Highlands (Par 70, 6,852 yards)
Purse: $8.3M (Winner: $1,494M)
Defending Champion: Harris English
FedEx Cup Leader: Scottie Scheffler
HOW TO FOLLOW
TV: Thursday-Friday, 3-6 pm ET (Golf Channel); Saturday-Sunday, 1-3pm (Golf Channel), 3-6pm (CBS)
PGA Tour Live: Daily feeds on ESPN+
Social Media: @TravelersChamp (Twitter)
NOTES: Scottie Scheffler leads a field that includes six of the top 15 players in the Official World Golf Ranking after Justin Thomas (back) withdrew. … English defeated Kramer Hickok in an eight-hole playoff last year, tied for the second-longest playoff in PGA Tour history. English finished T61 at the US Open after missing the cut at the Memorial, his first event since the Hawaii swing due to hip surgery. … Former University of Texas star Cole Hammer wants to make his PGA Tour debut as a professional. Ben James, the top-ranked junior in the country, is also in the field. … One of three events thus far this season to play under 7,000 yards, TPC River Highlands is where Jim Furyk tied the tour’s 18-hole scoring record with a 58 in 2016.
BEST BETS: Scheffler (+900 at BetMGM), who turned 26 on Tuesday, is trying to become the first five-time winner in a season since Thomas in 2016-17. … McIlroy (+900) admitted fatigue as he competes for the fourth consecutive week. He followed a win at the RBC Canadian Open with a T5 at the US Open to move to No. 2 in the world rankings. … Cantlay (+1200) has finished T15 or better in each of his past four starts in the event. … Sam Burns (+1800) is a three-time winner this season and was in contention last week before settling for a T27 after closing with a 76. … Jordan Spieth (+2500), the 2017 event winner, entered the field on Friday .
NEXT TOURNAMENT: John Deere Classic, Silvis, Ill., June 30-July 3

As the race heats up, is Mehmet Oz distancing himself from Trump? | Five for the Weekend