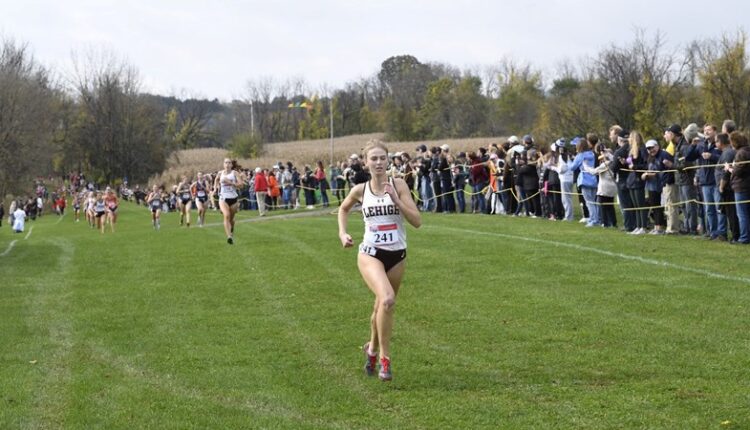 UNIVERSITY PARK, Pa. – The first four Mountain Hawks finished within less than a minute of each other as the Lehigh women’s cross country team placed fifth at the Harry Groves Spiked Shoe Invitational. Junior Christina Yakaboski was a top finisher for Lehigh, placing 29th overall with a time of 22:18.4.

“Christina chased out after some of the front runners over Penn State’s almost first mile,” said head coach Debbie Utesch. “She was able to settle into a rhythm after the mile mark and compete with the women around her. She really held her own over the course’s demanding final 1200m which allowed her to open the season with a solid starting point. Christina had a very strong track and field season last spring and I’m happy to see that her cross country season will be building off of the performance jumps she made in April and May.”

“Andrea, Annalize and Maddie ended up being able to work together in a small, strong pack throughout most of the race,” Utesch continued. “It is nice to see those matchups happening this early in the season when everyone is trying to shakeout some racing cobwebs and get good competitive starting points.”

Sophomores Maddison Hayes and Lauryn Heskin were the final scorers for Lehigh on Friday morning. Hayes placed 54th with a time of 23:16.9 while Heskin placed 74th, finishing the race in 24:09.4.

“I am pleased that we have been able to have different women step into scoring places for our squad over the past two weekends,” Utesch said. “Each woman has had a chance to be an integral scoring component in one of our last two races. In doing so, we have beaten some solid programs along the way as well as get a glimpse of the strength of some of our conference and regional opponents.”

The Mountain Hawks will return to Bethlehem and host Lafayette on Friday, Sept. 16 in the Rivalry presented by Lehigh Valley Orthopedic Institute. The women will open up the meet at 5:15 pm with the men’s team following at 5:45 pm

Following the annual dual meet, Lehigh will host the 48th Annual Paul Short Run on Friday, Sept. 30. Competition is set to begin at 9:30 am