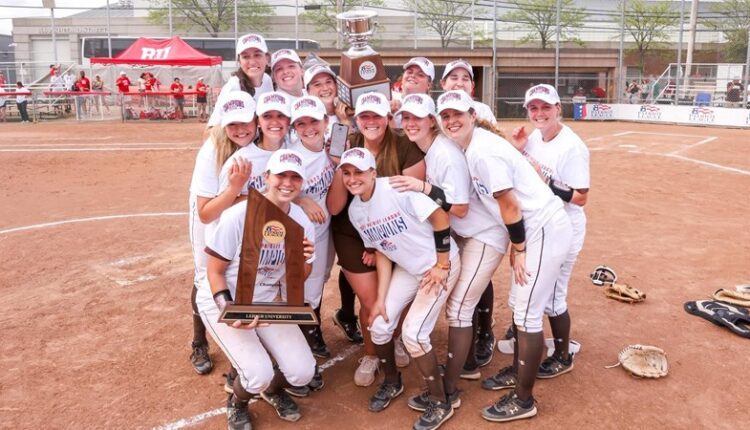 BETHLEHEM, Pa. – Lehigh returns to the NCAA Regionals for the first time since 2017 as the Mountain Hawks make their first-ever trip to Seattle to open double-elimination regional action against host and No. 13 seed Washington Friday evening at Husky Softball Stadium.

The Mountain Hawks won their league-best 15th Patriot League title in Boston last weekend, defeating host Boston University 1-0 and 4-1 in the championship round to mark their return to the NCAA Tournament. Lehigh is 23-7-1 since returning from its spring break trip to Florida on March 20.

The Mountain Hawks won all six of their Patriot League series to finish in second place in the league standings with a 15-3 record. Lehigh traveled to Boston University and rebounded from a 1-0 loss to the host Terriers in the winner’s bracket semifinal to beat BU twice on the tournament’s final day to win its 15th tournament crown. The Mountain Hawks opened the tournament with a 3-2 win over Army West Point and then rebounded from the loss to Boston University by eliminating Colgate 5-1. Needing to defeat Boston University twice in the championship round, senior Gabriella Nori threw a five-hit shutout and Lehigh scored an unearned run to take Saturday’s first game 1-0. In Saturday’s second game, seniors Jaelynn Chesson and Addie Kittel hit back-to-back home runs in the third inning, with Chesson driving in three runs with her school record 14th home run of the season, and sophomore Katelyn Young blanked BU through the first six innings of a 4-1 Lehigh victory.

Nori was named the tournament’s MVP and was joined on the All-Tournament Team by Young, Chesson and Kittel.

Senior Carley Barjaktarovich leads the Mountain Hawks with a .374 batting average, 58 hits, 34 runs scored and 23 stolen bases. Chesson leads the team with her 14 home runs and 45 RBIs. Junior Emily Cimino contributed 22 extra base hits and 32 RBIs to go along with a .357 average.

Nori and Young have seen the majority of work in the circle for Lehigh. In 122 innings, Nori owns a team-best 110 strikeouts and a team-low 2.93 ERA. Young leads Lehigh with 18 victories and has struck out 103 in 154 innings.

Lehigh is making its 11th NCAA Regional appearance overall, and its first in five years. The Mountain Hawks are 7-20 all-time in NCAA Regional Play, with three of those wins coming against Texas A&M. Lehigh’s win over Central Arkansas in 2015 snapped a six-game NCAA regional losing streak.

Washington is hosting its sixth straight NCAA Regional. The Huskies won the 2009 national championship and have been national runners-up on three occasions, most recently in 2018. Washington owns 14 Women’s College World Series appearances and has made 16 Super Regionals, including last season. This year’s Washington team enters regionals as the No. 13 national seed with a 35-15 record. The Huskies finished third in the Pac-12 earning an at-large bid. Washington is led by Pac-12 Player of the Year Baylee Klingler, a top 10 finalist for USA Softball’s National Player of the Year award. Klingler is batting .433 with 22 home runs and 65 RBIs. Gabbie Plain is the Huskies’ top pitcher with an 18-6 record and 2.02 ERA and 189 strikeouts in 159.1 innings of work. Heather Tarr is in her 18th season as Washington’s head coach. The Huskies dropped two out of three games to Arizona State last weekend. Washington and Lehigh have one common opponent this season, Arkansas. UW defeated the Razorbacks twice in February, while Arkansas defeated Lehigh in March.

Sixteenth-ranked Texas earned an at-large bid out of the Big 12 Conference. The Longhorns enter the postseason at 38-17-1 after falling in the Big 12 semifinals to eventual champion Oklahoma State. Texas is hitting .312 as a team and has hit 55 home runs. Janae Jefferson leads the way for Texas with a .419 batting average. She also has scored 61 runs and driven in 30. The Longhorns’ top run producer is Mary Iakopo, who has 10 home runs and 50 RBIs to go along with a .342 average. Hailey Dolcini is Texas’ top pitcher with a 19-8 record and 2.32 ERA. She has 189 strikeouts in 162.2 innings of work. Estelle Czech and Sophia Simpson both thrown over 75 innings for the Longhorns as well. Mike White is in his fourth season as Texas’ head coach. White has led Texas and his previous team (Oregon) to Super Regionals in all 11 possible chances in his career. Lehigh and Texas had one common opponent this season: Notre Dame. The Fighting Irish defeated the Longhorns on Feb. 20 and the Mountain Hawks on Mar. 6.

Weber State captured the Big Sky’s automatic bid, outscoring opponents 27-0 over just 15 innings of play last weekend to capture their 10th conference title and first since 2019. The Wildcats are 38-10 overall and enter regions having won their last eight games. Three Wildcats are batting over .370, led by Faith Hoe and Chloe Camarero, who are tied for the team lead with 56 hits and 40 RBIs. Camarero has a team-leading 11 home runs. Arissa Henderson and Mariah Ramirez both thrown over 100 innings in the circle. Henderson boasts a 16-1 record and a 1.88 ERA with 128 strikeouts. Mary Kay Amicone is in her ninth season as Weber State’s head coach. Lehigh and Weber State both faced Penn this season with the Wildcats earning a 4-1 victory on Mar. 5 and the Mountain Hawks sweeping a doubleheader in Philadelphia on Mar. 30.

The Wildcats are the only team in the regional that Lehigh has faced previously as Weber State won two games at the 2019 GCU Invitational. Lehigh is 0-11 all-time versus members of the Pac-12 and 0-4 against current Big 12 members.

The Lehigh-Washington game is set to start at 8 pm ET/5 pm PT and will follow the Texas-Weber State game at 5:30 pm ET. Lehigh’s regional opener will be broadcast on ESPN+. All other games in the Seattle Regional will be streamed on the ESPN App with any additional television coverage to be announced over the weekend.

How Better Ventilation Can Help ‘Covid-Proof’ Your Home